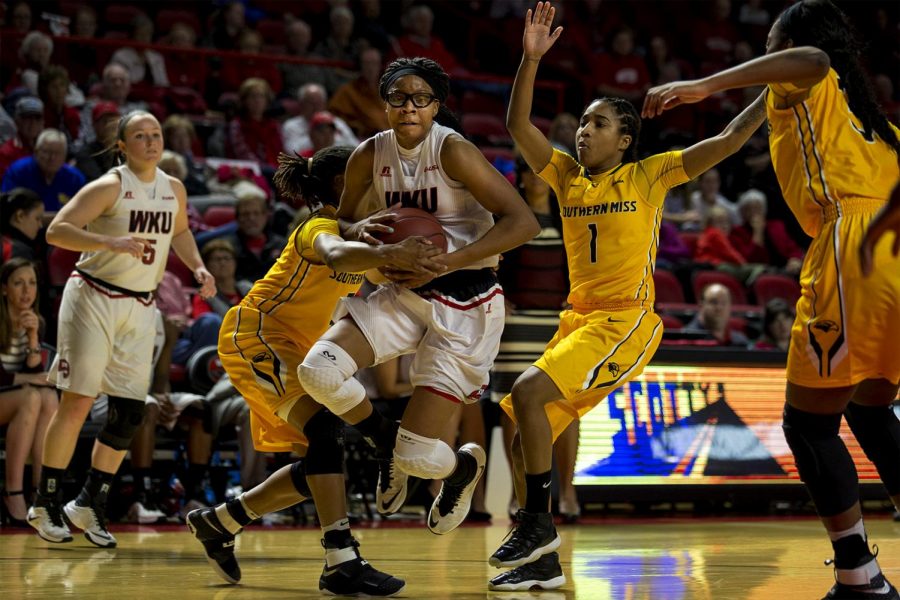 With just six games remaining in conference play, arguably the most critical game on WKU’s Conference USA schedule has arrived. The Lady Tops will take their 18-6 (10-2 C-USA) record into Murfreesboro, Tennessee for a showdown against their archrival Middle Tennessee State today.

The Lady Blue Raiders boast a 16-8 (11-2 C-USA) record, meaning the winner of tonight’s matchup will take over sole possession of first place in C-USA. Earlier this season, the Lady Tops outran MTSU by a score of 66-51 in a game in which they led as many as 33 points on three separate occasions in the second half.

“We definitely don’t expect to duplicate the first game, not on their home court,” Clark-Heard said on her radio show Monday. “When you go back and watch film from the first game, our press was working very well in the first half and we came out and made some big shots after halftime. However, I told my team this: they missed a lot of shots that they usually make. We got a little complacent and did some things that we weren’t continuing to do that got us that big lead. But I was proud of our effort and energy. It’s always a battle whenever we go to their home since I’ve been here.”

Since that loss to WKU, MTSU has won seven of its last eight games with an average margin of victory of just over 20 points. Those seven victims include Charlotte and Texas San-Antonio who are the lone two C-USA teams to defeat the Lady Toppers this season.

The Lady Blue Raiders are led by two of the top five scorers in C-USA. Sophomore forward Alex Johnson ranks second in the conference at 20.5 points per game while senior guard Ty Petty sits at fifth, scoring with 17.6 points per game. Petty also leads the conference in assists with 5.3 per contest.

“Petty is the key for them,” Clark-Heard continued. “She has raised her game to another level this year and is the leader of that team. They also have Johnson who is a load on the inside. She’s physically strong and can finish around the basket and rebound. As other people look at our roster they point out Kendall, Tashia and Ivy and that’s the way we look at them.”

In the first matchup, Johnson and Petty were held to 14 and 11 points, respectively. The Lady Tops held MTSU to a season low 15 first-half points as WKU’s press wreaked havoc on Petty and the Lady Blue Raider’s backcourt. WKU ended up outscoring MTSU 22-8 in points off turnovers in the 15 point victory.

“It’s what we always want to hang our hat on,” Clark-Heard said about her team’s defense. “I was really proud of what we’ve been able to do with our zone press and man press. It’s important to be able to use both because it keeps our opponent on their toes. I want our program to have the staple of ‘We’re going to play hard, compete, and force you to turn the ball over.’ After we cause chaos on the defensive end, we want to be able to come back on the offensive end and do some good things, but it starts with our defense.”

Unlike MTSU on that night, WKU has been the most efficient team in C-USA in terms of taking care of the basketball. Noble and fellow redshirt senior guard Micah Jones rank first and second in assist-to-turnover ratio individually, and WKU ranks first as a team. Noble and Petty will be the matchup to watch as the two senior guards are both competing for C-USA Player of the Year.

The Lady Tops and Lady Blue Raiders are set to tip off at 6:30 p.m. at Monte Hale Arena inside the Murphy Center. The game can also be streamed on BeIN Sports.