Clark-Heard impressed as Lady Tops move back into first place 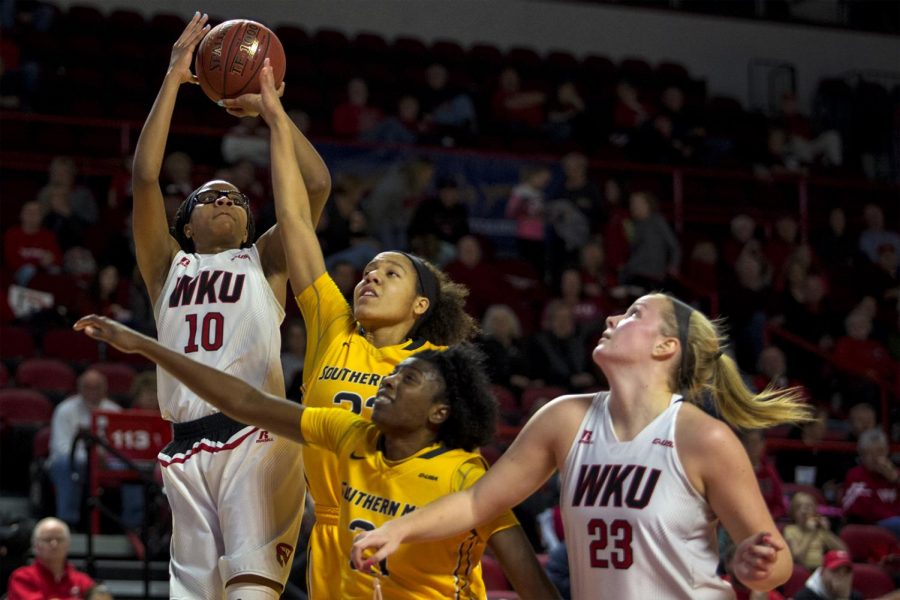 Although the WKU women’s basketball team swept both games in it’s homestand this past Thursday and Saturday, head coach Michelle Clark-Heard felt differently about her team’s energy in each game.

Following a 67-58 victory against Louisiana Tech, Clark-Heard said her team “did not play with the energy that we usually play with.” Two days later, Clark-Heard’s feelings toward her team’s energy had flipped following a 79-53 victory over Southern Mississippi, a game in which the Lady Tops scored as many points in the second half (53) as the Lady Golden Eagles scored in the entire game.

“That was one of the best games we’ve played defensively,” Clark-Heard said following the victory over Southern Mississippi. “Our energy and focus was there, and we followed the game plan to a T. That was Lady Topper basketball. We didn’t shoot the ball well in the first half, but defensively we kept doing the things we needed to. We didn’t let up just because we weren’t making shots.”

The Lady Tops led USM by just three points at the half before a 16-0 run blew the game open and gave WKU a lead much too large for the Lady Golden Eagles to overcome.

Trailing 6-5 early, junior forward Tashia Brown scored eight points during a 10-0 run that gave WKU a 15-6 lead after the first quarter. The Lady Tops pushed the lead to 17-6 and hoped the momentum would carry on the rest of the half.

However, similar to the previous two games, the Lady Tops’ opponent found a way to hang around, slowly chipping away at the WKU lead throughout the remainder of the second quarter. Holding on to a 26-23 lead at the half, Clark-Heard decided to implement a full court press in the second half in hopes of creating turnovers and shifting the momentum back in WKU’s favor – and that’s what happened.

The Lady Tops recorded three steals, all leading to points, during the 16-0 run that gave the Lady Tops a 51-36 lead at the end of the third quarter.

“We talked about pressing at halftime, how it was fun to play like that,” junior forward Ivy Brown said about the full court press. “Coach Collins always talks about if you’re going to press, you have to do it well. If you want to play fast, you’re going to have to press. It’s a lot more fun to get your hands on steals and getting in the passing lanes than trying to sit back and dictate what they’re going to do.”

The Lady Tops carried their momentum into the fourth quarter. Redshirt senior guard Kendall Noble found redshirt junior forward Kyvin Goodin-Rogers for a wide open three that pushed the Lady Topper lead to 17 points. Noble’s assist was just one of sixteen assists that WKU racked up in the game.

“That was another thing we talked about at halftime,” Clark-  Heard said about her team’s ball movement. “We felt like we were getting some good shots in the first half, but we also felt like we could’ve made the extra pass and got it another player on the team that was open. When you look at the 16 assists, you know we were moving the ball well.”

The Lady Tops continued to cruise the rest of the way en route to a 79-53 victory. Redshirt sophomore guard Jaycee Coe’s three at the end of the game made her the ninth player to put her name in the score book. Four of those nine players, Ivy Brown (game-high 20 points), Tashia Brown (15), Noble (13), and Micah Jones (11) all broke double figures to lead the Lady Tops.

“That was something we talked about Thursday  night after the game,” Clark-Heard said about her team’s depth. “We have a great team and we have different players that step up at different times,  but we need everyone from the first person to the last person. I was very proud because they showed a lot today. Whenever somebody’s number was called they were ready to go and do whatever they needed to do to help us win.”

The win improves WKU to 17-6 (9-2 C-USA) on the season, which places them in a three-way tie for first place along with Charlotte and Middle Tennessee State. The Lady Tops are back in action on Saturday when they travel to Huntington, West Virginia, to take on Marshall. Earlier this season, WKU defeated Marshall 73-57 at E.A. Diddle Arena.