A portrait of living in Potter’s Castle 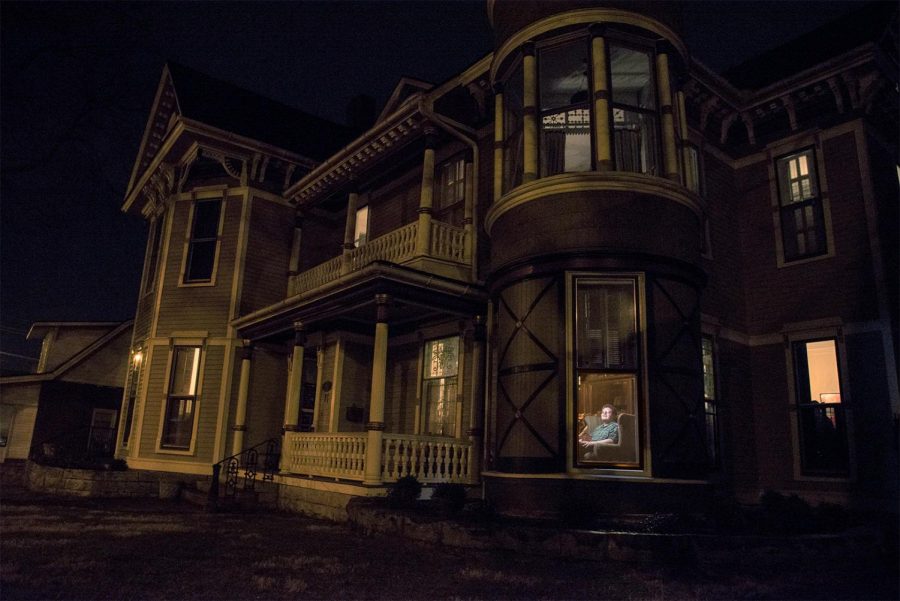 Andrew Henderson sits in the study, one of the many rooms in The Castle, located on College Street. The Castle is considered a historic landmark.

Since coming to WKU in 2014, I’ve lived in some truly wonderful places. The illustrious Minton Hall, the now crumbling Southwest Hall and now I live in a humble home on College Street known as Potter’s Castle.

I jokingly say humble because living in a home referred to as a castle is honestly contradictory to anything that would resemble humble. For Bowling Green residents, Potter’s Castle has been a news item since about 2009.

Previous home owners, John and Alisa Carmichael, began the enormous job of restoring the house when they bought it almost a decade prior what would’ve then been about 1999, according to the Daily News. But the Carmichaels were running low on time and money for restorations and the house had been on the market for two years at that point.

The house was built in the 1880s by James Erasmus Potter, the son of local banker Pleasant J. Potter, according to the Daily News. The house was passed through the hands of multiple families over the years and was eventually divided into 12 rental apartments.

In 2010, the Kentucky Trust for Historic Preservation worked to put the home on a national market in hopes someone would purchase the property. Come 2011, Potter Castle entered into the hands of its current owner, and my landlord, Steven Morgenthaler.

Originally, he wanted to turn Potter Castle into a bed and breakfast, but clearly that did not work out to his favor, and that was for a few different reasons. So, obviously, the next best thing to do was open up the 19th century home to 10 college guys. For what reason he decided to do that may be forever a mystery.

Yes, that beautiful home you pass on the way to Hilligans with the turret and stained glass windows is home to 10 guys who just try their hardest not to damage anything beyond repair.

One thing I got a lot when I tell people where I live are awed expressions that I live in a house reminiscent of somewhere a member of the bourgeoise would live and one person who told me they didn’t think I should be living there is they’re shocked I live with nine other people.

Technically 12 other people if you count my landlord with his wife Patsy Morgenthaler who live on the top floor and our house dog Marley. All three of whom I would gladly push out of the way of an oncoming truck and put my life at risk for.

Of course, disagreements and arguments have come up over the course of the past several months as they were bound to. Really, the first ever was about parking and how some people felt the need to, perhaps, over dramatize the reality of the parking situation. A recurring one has been about laundry and a surprising trending developing about air drying clothes.

There was also one time when I accidentally broke one of my roommate’s Harambe shot glasses. I’m not sure if I ever got around to telling him. I’m sorry, Noah.

More recently, there’s been discussion surrounding the cost of water, how that factors into the rent and the questioning of why anyone needs to take a 40 minute shower. Even more recently, my roommate Elijah set my personal website as his homepage for his mobile browser. Friends help friends with their website traffic.

Despite 10 people living on the first two floors, issues of space haven’t come up a lot nor has overcrowding ever been really an issue. This, of course, is likely attributed to the size of the house as well, but also everything feel more open in general.

But maybe that’s also a symbol of how close we’ve all gotten, or not it could be for any reason and I don’t want to end this on a sappy note. If you take anything from this just know that living in a 19th century house is great. There’s no big moral lesson to be taken from this for you to apply to anything.