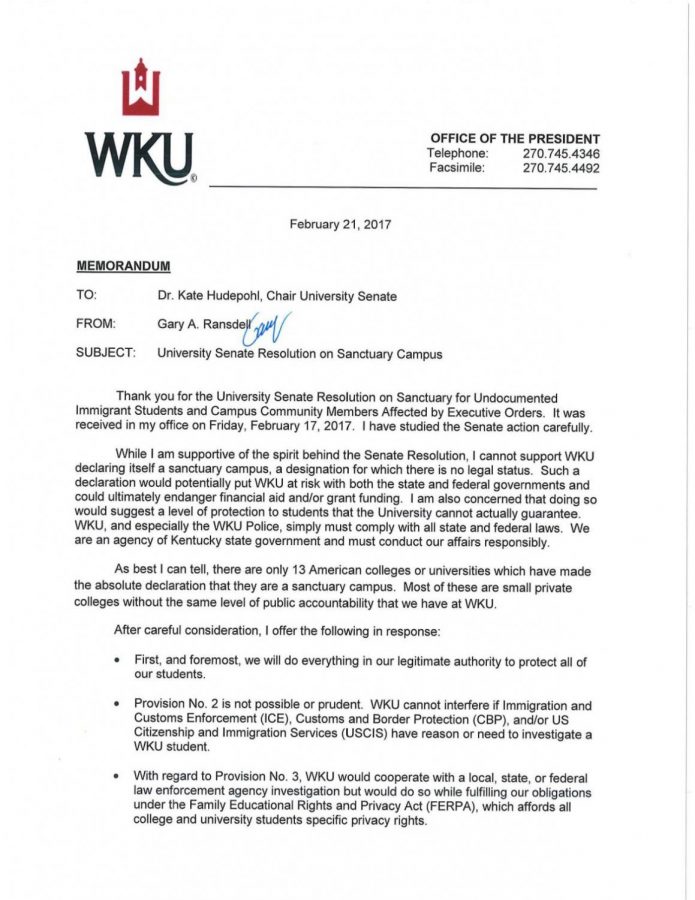 President Gary Ransdell has declined to name WKU a sanctuary campus, which would extend certain protections to undocumented immigrant students on campus, according to a resolution passed by the University Senate last Thursday.

The resolution supported allowing WKU to continue to admit undocumented immigrant students and to not share information about students unless required by subpoena, court order or warrant. The resolution also said WKU will not allow certain immigration and border protection services on campus for enforcement purposes without a warrant.

In a response to the resolution delivered to University Senate Chair Kate Hudepohl Tuesday, Ransdell expressed his decision against declaring WKU a sanctuary campus, saying it is “a designation for which there is no legal status.”

“WKU, and especially the WKU Police, simply must comply with all state and federal laws,” Ransdell wrote in his response to the resolution. “We are an agency of Kentucky state government and must conduct our affairs responsibly.”

The resolution stated “WKU will not allow Immigration and Customs Enforcement (ICE) / Customs and Border Protection (CBP) / U.S. Citizenship and Immigration Services (USCIS) to be present on the university campus for enforcement purposes unless required by a warrant,” which Ransdell wrote “is not possible or prudent” and “WKU cannot interfere” if the listed services have reason or need to investigate a WKU student.

The resolution also stated WKU would not share information about students unless required by subpoena, court order or warrant. In response to this provision, Ransdell said “WKU would cooperate with a local, state, or federal law enforcement agency investigation but would do so while fulfilling our obligations under the Family Educational Rights and Privacy Act (FERPA), which affords all college and university students specific privacy rights.”

The fourth provision in the resolution said “WKU will continue to admit undocumented immigrant students as the law allows and offer undocumented students equal access to university resources as appropriate.”

Ransdell wrote,  WKU accepts students who meet admission standards and “all enrolled students have access to university resources and services, and all are valued members of the WKU family.”

Ransdell said WKU will provide resources to support students adversely affected by Donald Trump’s recent Executive Order,  temporarily banning immigration from seven predominantly Muslim countries. The resolution proposed providing these students access to immigration and legal advising as well as expanded opportunities to remain on campus and assistance during break periods. Ransdell said WKU will provide resources “to the extent it is lawful to do so.”

“My record of embracing our international students speaks for itself,” Ransdell wrote, ending the response with: “While I understand the symbolic gesture that accepting this resolution may provide, I believe it is more prudent to remain focused on those tangible things that we can do to support students who may be impacted by current or future immigration actions.”