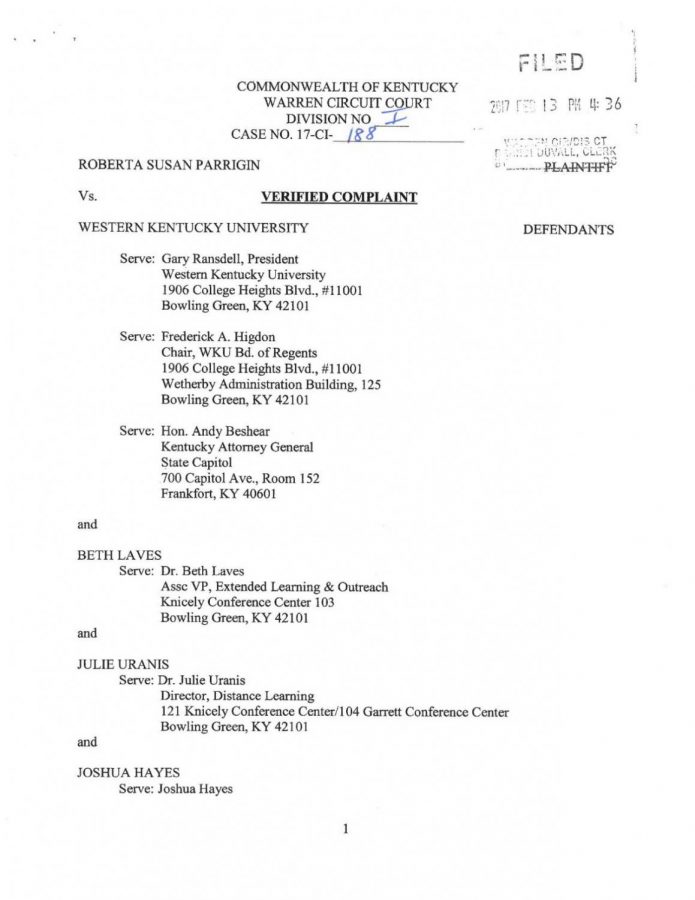 According to the lawsuit, Parrigin was wrongfully terminated by WKU after university actions “so intolerable that any reasonable person would have felt compelled to resign,” including a pattern of alleged unlawful age and sex discrimination resulting in a hostile work environment.

The suit alleges Parrigin was not given equal opportunity for a position offered to a younger male employee with less qualifications and experience. The suit also identifies remarks from Parrigin’s former supervisors including statements such as  it was time for Parrigin to retire despite her lack of intentions to do so.

The complaint also contends Parrigin was sexually harassed and threatened by several male colleagues during her employment.

Parrigin was listed as program manager for WKU’s Workforce Training Center on her staff profile on WKU’s website. She worked 22 years at the university and with the Division of Extended Learning and Outreach (DELO) since its creation, according the university website.

According to the suit, Parrigin’s termination was the result of a breach of contract in response to her reporting of discrimination.

Parrigin resigned from her position on Jan. 9, 2017, according to a university official.

Other than a denial of the allegations, WKU currently has no comment on the litigation.

Stay updated on this story as information becomes available with the online version at WWW.WKUHERALD.COM.