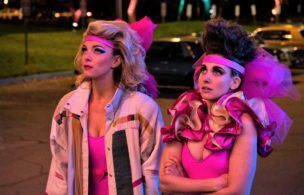 There were a few TV victims over the course of the pandemic, one of which was Netflix series GLOW.

The ’80s set dramedy following the professional and personal lives of women wrestlers was a hit when it began and Netflix originally renewed the program for a fourth and final season. But amid production delays and budget concerns, the streamer began to take back some of its renewals, rescinding GLOW‘s in the process. See Also‘Queen Sono’ & More Series Canceled Due to Coronavirus
As networks cut costs due to production delays, some shows are paying the price.

To say fans and the cast were disappointed would be an understatement. Some have held out hope for closure in the form of a film and now one of the show’s stars, Alison Brie, who played Ruth Wilder, is sounding off on the possibility.

Speaking to The Playlist for their The Fourth Wall podcast, Brie said, “I certainly think a [GLOW] movie could tie everything up.” But as much as she gives credit to the series’ writers Liz Flahive and Carly Mensch for their devotion to the characters, her own view is a “little pessimistic” she admitted. “I’m also part of the Community cast, who’s been trying to get a movie going for six years, Brie explained. “So what I’m saying is don’t hold your breath because if it does happen, it might take a minute.”

Considering Community ended in 2015 and it still has yet to produce a movie does prove a valid point. Despite fans wishing they could will a movie for GLOW into existence, it’s likely to take a bit longer. No official word from Netflix has been provided on the matter, but it’s definitely a positive sign when the cast members and creative team are supportive about the idea. At the end of the day, Brie said, “we’re lucky that we got to make three, to me, perfect seasons of a show. I love it so much and it will live on Netflix forever. So people can still check it out.”