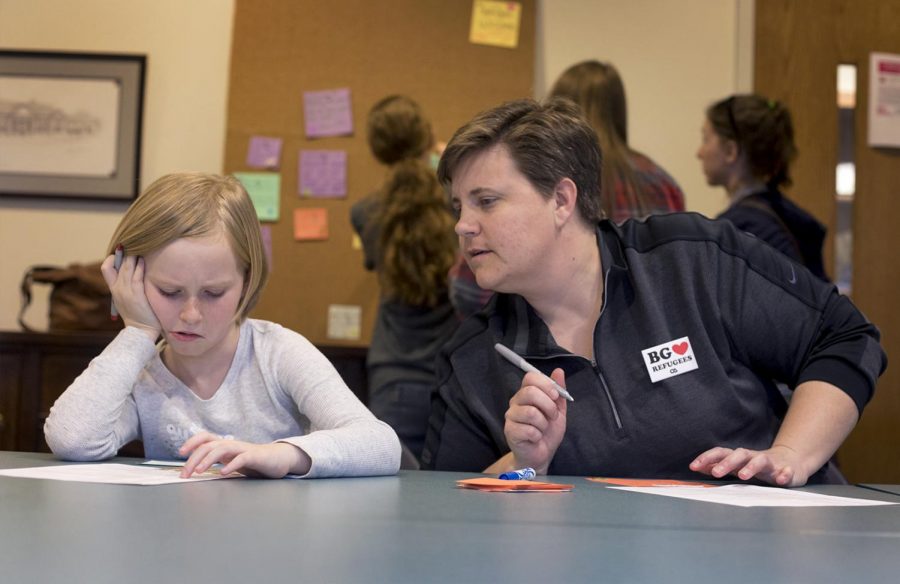 Becky Valentine, of Bowling Green, and her daughter Harper Ferrell attend Welcome Notes for Refugees. The two heard about the event from Denise Anderson the organizer of the event. "We love diversity and support all from around the country," said Valentine.

Greetings written in multiple languages slowly filled the empty space on a bulletin board hung on the walls of the Warren County Public Library on Thursday. A variety of supporters, including WKU students and Bowling Green citizens, walked in throughout the day on Thursday, leaving messages to welcome Bowling Green refugees.

Denise Anderson, Bowling Green resident and organizer of the event, “Welcome Notes for Refugees,” has recently been volunteering at the International Center and wanted to do something to make people feel better when walking through its doors.

“I’ve always enjoyed visiting the International Center,” Anderson said. “I love it there.”

As a volunteer, Anderson donates clothing and household goods throughout her years living in Bowling Green.

Anderson said she expected around 36 people to show up between 4 to 7 p.m. at the library to participate and write notes welcoming refugees to Bowling Green. She said the idea for the event came from a welcome wall on display at the Muhammad Ali Center in Louisville.

“Welcome to your new home in Bowling Green!” was written on a message left by eight-year-old Harper Ferrell. She wrote seven notes total, all written in different languages. Ferrell wants the refugees to “feel happy” when they see the board hanging at the Bowling Green International Center.

Ferrell’s mother, Becky Valentine, said love is what makes the world go around.

“She [Ferrell] grows up in a world where there’s inclusion,” Valentine said. “We support each other; where we don’t see classes of people, everyone is important.”

Valentine said she wants people to come up to the center to see notes from members of the community who support them.

Erika Brady, WKU professor of folk studies and anthology, attended the event and wrote multiple notes for the refugees.

“It’s a good idea,” Brady said. “A time of great uncertainty is especially important to value the immigrant population.”

Anderson has lived abroad for 20 years in Asian countries including Japan and China. Living in China, Anderson felt welcomed from strangers. She said the less you have, the more you’re willing to share the little bit you do have.

“I think people flee their countries when they have no choice,” Anderson said. “When it’s life or death, they try to live.”

Anderson said refugees and their children should not have these kinds of fears when arriving to their new home.

“If they’ve gotten into this country, they belong here,” Anderson said. “A lot of people have their backs.”