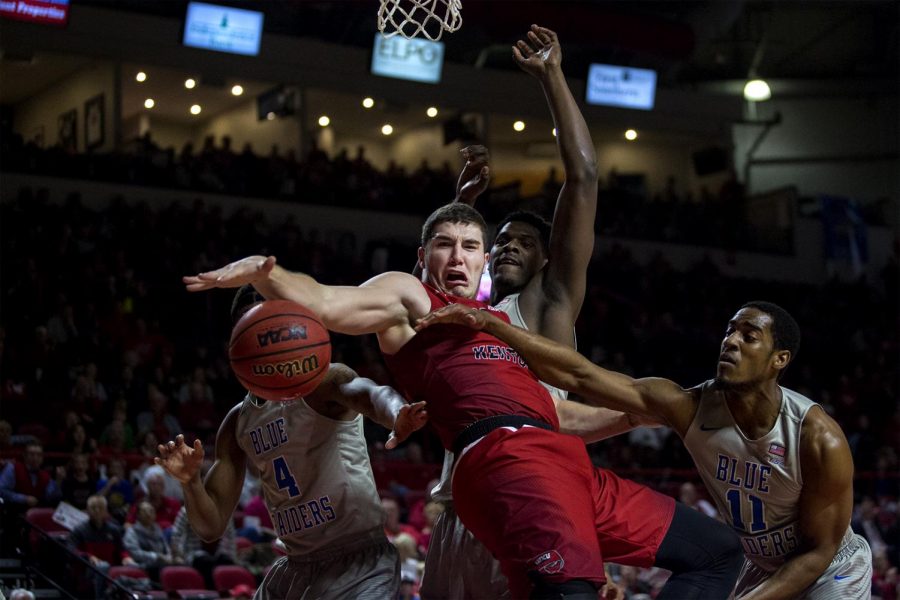 WKU junior forward Justin Johnson (23) struggles for the ball under the basket against MTSU junior guard Edward Simpson and other MTSU players during their game on Thursday, February 16. MTSU won the game with a score of 78-52.

If there was no Bowling Green massacre six years ago as Kellyanne Conway cited in a recent interview, there was one tonight in E.A. Diddle Arena.

Earlier this season on Jan. 14, the Tops faced off against Middle Tennessee in Murfreesboro and fell 91-76. Thursday night was no different, as the Blue Raiders walked out of Diddle with a 78-52 victory, dropping the Hilltoppers to 12-14 on the season.

WKU got the chance Thursday night to get revenge over their long-time rival.

MTSU Head Coach Kermit Davis said that that was about as good as his team has played all year.

“I thought for the first seven or eight minutes, Western had the better energy,” Davis said.

Things turned around quickly, and the Hilltoppers couldn’t reach the 20-point mark in the first half. Heading into halftime the Raiders had built a comfortable 32-18 lead.

The lone positive from the first half was junior forward Justin Johnson’s nine boards heading in to intermission.

But once they got hit in the mouth, the Hilltoppers couldn’t “stop the bleeding” as Stansbury noted, and MTSU went up by as many as 32 with under 10 to play in the second half.

WKU, like MTSU, had three players scoring in double figures, but no Hilltopper notched more than 12.

Senior guard Pancake Thomas led the offensive attack with 12 points while going 4-5 from deep. Senior forward Anton Waters and freshman guard Tobias Howard each put up 11 of their own.

MTSU senior forwards JaCorey Williams and Reggie Upshaw led the way for the Raiders as they combined for 17 points in the first half. Both players finished their nights with a double-double performance. Williams went for 20 points and 10 rebounds and Upshaw with 19 and 11.

“[Williams] and Upshaw had 17 between them at halftime,” Stansbury said. “And a lot of those they just went and got. They beat us inside that paint.”

The crowd of 4,385 showed up in support of the Toppers, but quickly dispersed after the Blue Raider lead grew too large to overcome.

“We had more players play better today,” Davis said. “I thought we guarded at a high level. The changes of defenses bothered them and then we got in transition in the second half so that was a good road win for us.”