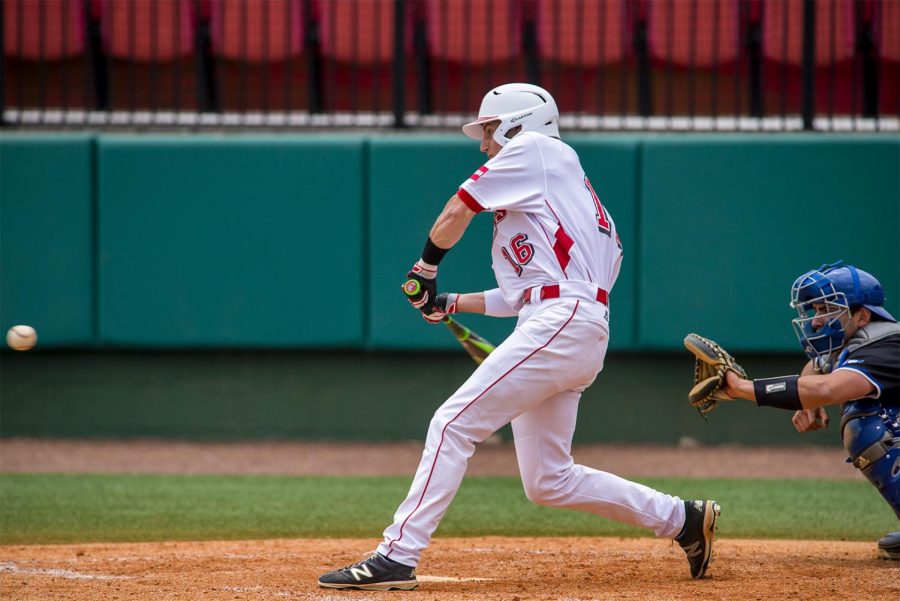 Outfielder Grant Malott hits the ball during the Hilltoppers 3-1 loss to Louisiana Tech on Sunday April 10, 2016 at WKU Softball Complex in Bowling Green, Ky. Malott was at bat twice and had 1 hit.

The WKU baseball team begins its 2017 season this weekend against Valparaiso at Nick Denes Field, with Opening Day slated for Friday with a 3 p.m. first pitch.

The Hilltoppers, who enter year two under Head Coach John Pawlowski, are coming off an up-and-down 2016 campaign, as they finished the year with a 24-30 overall mark and a 10-20 showing in Conference USA contention en route to missing the league’s postseason tournament for a second-straight season.

WKU is looking to get off on the right foot this go-around.

“It’s an exciting time of the year for all of college baseball,” Pawlowski said in his preseason press conference. “With the season right around the corner, our guys have worked extremely hard.”

The Toppers will open their season at home for the ninth time in the last 10 seasons. In those last eight opening series at home, WKU has posted a 14-8 record and won five of those series after taking a 2-1 set victory over Youngstown State last February to begin the season.

Valparaiso University, a member of the Horizon League, comes into 2017 following a 30-28, 17-12 showing on last season’s schedule. The Crusaders opened 2016 on the road at Jacksonville State, a place in which it won just one of the series’ contests, dropping the three-game set 2-1.

“I’m excited about 2017,” Pawlowski said. “We’re looking forward to the challenges that lie ahead. When you look up and down our roster, you’re going to see 19 new faces on our team. We’re certainly excited about how hard our guys have worked.”

“When you start the fall you get 19 new guys, but by the end of the fall they don’t really seem like new guys anymore. By then we’re all part of it,” senior infielder Thomas Peter said. “You grind every day in the fall and you kind of just become a family.”

“When you look at our team, there’s a couple of that are going to be very important,” Pawlowski said. “Offensively, I feel like we have some moving pieces and weapons that we didn’t have in the past, so I like our offense. Our pitching staff, it’s always going to be that you’re only going to be as good as you pitch.”

Valpo, who was picked to finish fourth in its conference by a vote of the league’s head coaches, brings back second-team all-Horizon League first baseman Nate Palace an all-freshman honorees Chase Dawson and Sam Shaikin.

WKU has the opportunity to start out strong in front of its home fans, as it hosts 18 of its first 22 games on its all-new AstroTurf playing surface at Nick Denes Field. The Crusaders, on the other hand, open their season by playing 25-straight on the road.

“One of the great things – and I’m very thankful for the administration allowing us to do it – is being able to play on the AstroTurf that we put in this past summer,” Pawlowski added. “As you see the schedule, the first four non-conference weekends are at home this year, which was by design so we can play as many games as we can at the yard before we get into Conference USA play.”

Following Friday’s tilt, the Hilltoppers and Valparaiso meet at 1 p.m. on both Saturday and Sunday afternoon.