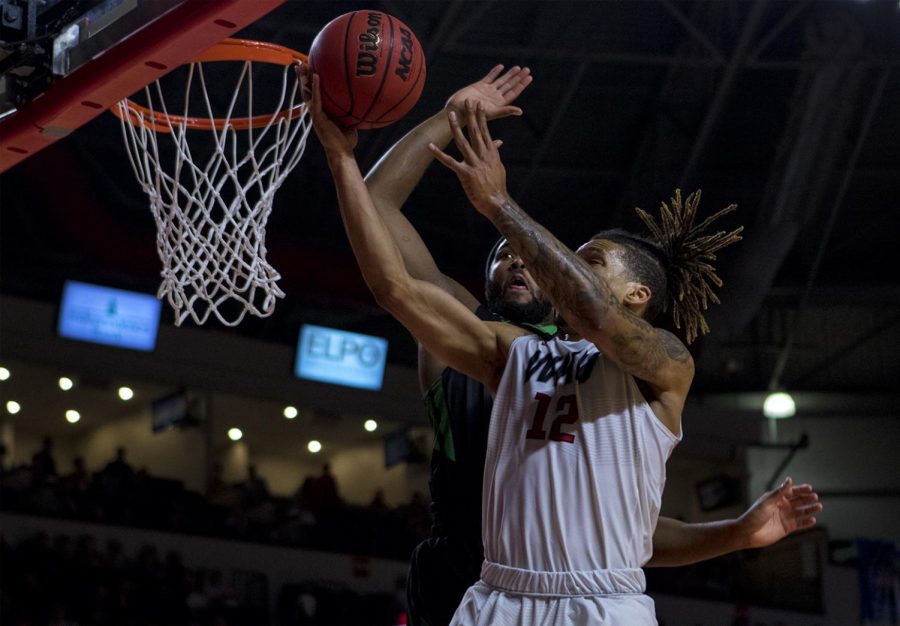 Five days after dropping below .500 on the season, WKU will face two tall tests on their home court.

Tonight, the Hilltoppers play host to Conference USA frontrunner and longtime rival, Middle Tennessee. The Blue Raiders are sitting alone atop the conference standings with at 12-1 record in league play and 22-4 on the year.

“We have a lot of respect for them. We know they’re a really good team,” senior guard Pancake Thomas said. “They’re the best team in the conference, so we will go in to this game, and we will be looking to get off to a really good start.”

Earlier this season on Jan. 14, the Tops squared off with the Blue Raiders in Murfreesboro, Tennessee in front of a sea of blue. WKU got off to a slow start in the contest and headed in to halftime down 14. The Blue Raiders would go on to hold off the Hilltopper charge and take the game 91-76.

“We know that we can play with them for 20 minutes, we just got to be able to put it together for 40,” Thomas said.

This Middle Tennessee squad is having a special season. After knocking off Michigan State in the first round of the NCAA Tournament last year, they have picked up right where they left off. MTSU has wins over Ole Miss, Murray State, Vanderbilt and Belmont.

After the loss to Marshall this past Saturday, the Tops are ready to get back out on the floor and take care of business.

“Like I’ve said, you’d always rather be at home,” head coach Rick Stansbury said. “We found out against Marshall that being at home don’t guarantee anything by any means. We just came off a very difficult game … it’s obvious you want to get off to better starts.”

A matchup to look for in the game that could have an impact on the outcome is whoever Stansbury decides to put on MTSU redshirt senior and Arkansas transfer JaCorey Williams. The talented big man is averaging 17.1 points per game while grabbing 7.5 boards and shooting 53 percent from the field.

Senior Reggie Upshaw presents some problems as well. He’s a big man that can spread the floor well and knock down a shot from just about anywhere on the floor. Upshaw boasts averages of 14.1 points and 6.5 rebounds per game.

“They’ve got great experience with Upshaw and Williams,” Stansbury said. “They function well together at both ends. They’ve got a good system, they’ve got good depth.”

If the Tops can contain one or both of Upshaw and Williams, they will have an opportunity at winning a game that could be the first step to righting the ship heading into post season play.

One of the keys for the Tops to come out on top is for two of the top scorers to have a solid offensive output on the same night. Stansbury mentioned if they can get senior guard Que Johnson and Thomas going on the same night they are a tough team to beat.

“I think it’s really important,” Thomas said. “We never really had a game like that yet so to get me, [Que] and with what Justin [Johnson] is doing right now, to get us all scoring in one night we would be really hard to beat.”

The first 1,000 fans will receive a red shirt in spirit of a red-out fan promotion. The game will be broadcast on CBS Sports Network with tip-off set for 8 p.m. in Diddle Arena.