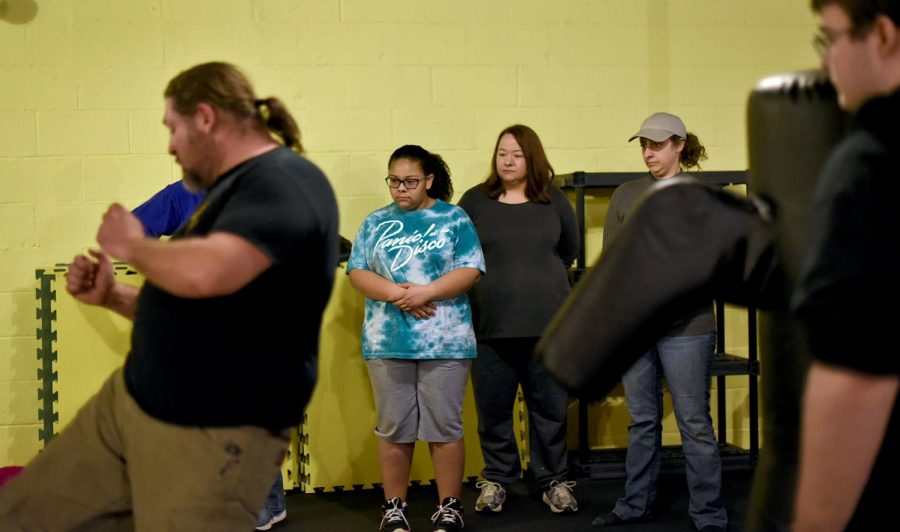 Selena Travis, 12, and her mother Vella Mae Travis, 43, focus on their instructor, Kevin Taylor, at the Women's Self Defense Workshop at Kentucky Grapplers on February 18th, 2017. "I think it's important for every woman to know how to protect themselves, said Vella Mae Travis.

Learning to Fight Back

The Women’s Self Defense Workshop focused on teaching techniques in self-defense, along with a lecture by Kentucky Grappler founder and trainer Kevin Taylor pertaining to how to avoid conflict and dangerous situations. Though the Kentucky Grapplers have held workshops catered towards women’s self-defense in the past, Taylor said the school now plans to make the workshop a monthly event.

“We’re more geared towards self-defense,” Taylor said. “We figured that it would be a good idea to get women in here because we’re not trying to push them into competition and doing a one-off or a series that they can participate in would help, and I see it as a way to give back to the community.”

Saturday’s workshop began with Taylor addressing the workshop audience as they sat in a circle, speaking about issues such as how to psychologically prepare to use self-defense, how to avoid confrontation with potential attackers and what to do when confronted with violence.

After addressing the audience, Taylor demonstrated self-defense techniques, instructing the audience to use these techniques on training equipment. Students of the Kentucky Grapplers held on to the equipment and encouraged participants as they practiced their newly-learned moves.

Jeanne Cline, a participant at the workshop, said the event taught her lessons she considered valuable.

“They’ve given us skills that we can take home and practice at home,” Cline said. “It makes you more aware of things to be aware of.”

Founded in the summer of 2015, The Kentucky Grapplers started as a way for Taylor to teach residents in the Bowling Green area the self-defense techniques he learned through his experience training under Sifu Larry Hartsell, a student of Bruce Lee. Taylor spent five years in the 1980s with Hartsell, traveling around the world to teach martial arts seminars.

Taylor said he named his school after Hartsell’s contributions to the martial arts.

“He was the one who really added grappling to Bruce Lee’s Jeet Kune Do,” Taylor said. “We call ourselves grapplers in respect of Larry Hartsell.”

Taylor later studied at WKU, receiving a degree in theater and sociology. He spent 10 years teaching karate and massage therapy in Louisville before he returned to Bowling Green to open the Kentucky Grapplers.

The Kentucky Grapplers teach several classes every week focusing on martial arts disciplines including Wing Chun, Kali-Silat and Jun Fan. In addition to the Women’s Self Defense Workshop, the school has also been involved with events such as seminars with famous fighters and demonstrations at festivals.

Herb Travis, a student at the Kentucky Grapplers, said the school is open for anyone in the community.

“We’re not MMA people who are out there wanting to beat people up,” Travis said. “It’s about friends and family.”

Taylor said he hopes to reach out to more women in the community to participate in the monthly workshops and hopes to focus more on the physical aspects of the seminar as the event draws in more regular attendees.

“I think women specifically as a group need to be able to protect themselves and a lot of times aren’t taught to,” Taylor said. “I think part of it is empowering women and protecting them. It would be nice if we were in a society where we didn’t have to worry about that. But we do, and it’s not to make people scared but to make them aware.”