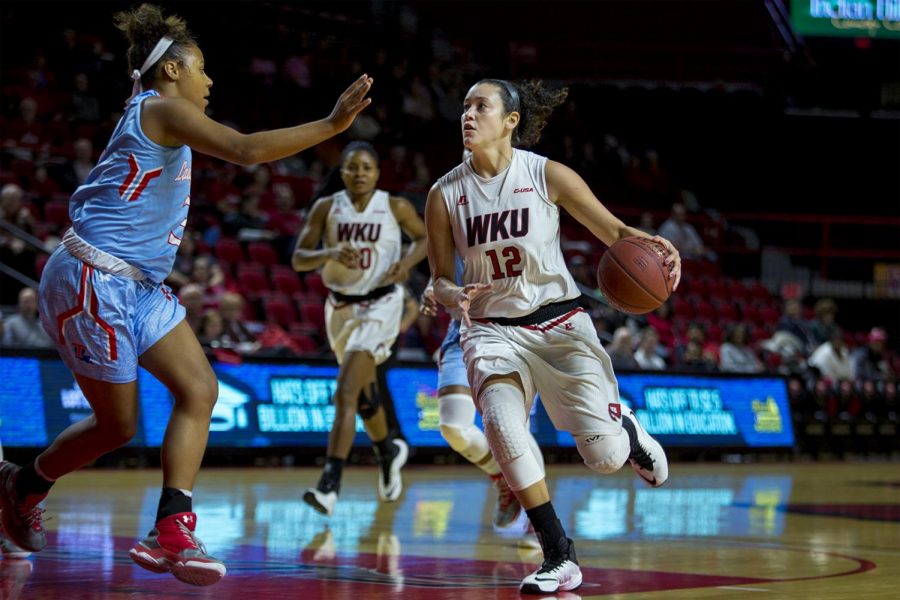 Reflection is oftentimes an overlooked aspect of how an athlete spends their time. With senior night swiftly approaching, Lady Topper seniors Kendall Noble and Micah Jones both spent a moment reflecting on what have been two remarkable careers on the Hill before Thursday’s game against Charlotte.

“It is definitely bittersweet but, you know, we’re going to try to stay focused and get two wins and worry about the senior night after the game on Saturday,” Jones said. “We’re just looking to stay focused”

Throughout everything, the teammates have found friendship during their time spent in the Lady Topper basketball program.

Noble and Jones have similar basketball backstories. Both hailing from two small, rural Kentucky communities, their mutual love of basketball was a guiding interest throughout their early years.

Both were prep star players during high school upon leading their respective programs to exceptional heights. Noble and Jones entered WKU the same year that Lady Topper Head Coach Michelle Clark-Heard took over. Although their time together may be ending, Clark-Heard said the experience of coaching both women has created a strong student-pupil relationship between the three.

“Definitely will be bittersweet,” Clark-Heard said. “You know … five years, and that’s five years that I’ve been in charge of this program. The staff and I agree, coach [Greg] Collins and I especially. They’re just two amazing young women who have definitely found a way to add their niche to our program and do everything they needed to do to help us be successful.”

Statistically speaking, Noble will finish her career as one of the best players in the history of the program. She’s received numerous accolades such as being named the 2016 Conference USA Player of the Year and Defensive Player of the Year. Even though she’s achieved largely unparalleled success in her time on the Hill, Noble maintains the mindset that got her this far: focusing on the task at hand.

“I’m focused on the game’s first,” Noble said. “I’m glad senior day is after the game so we can save our emotions for after the game.”

Along with Noble, Jones will finish her career in the prestigious 1,000-point club. Last season, Jones suffered a season-ending knee injury in the second week of the season against Louisville. She was granted a medical redshirt, so she could return for another season.

During this season, Jones has taken on one of the main leadership roles on the team. Her leadership experience and consistency has provided a crucial element to the Lady Tops.

Noble and Jones’ relationship is a special part of this season’s team. The two’s friendship is strong on and off the court. Playing on the same team for three years and being roommates, Noble and Jones’ chemistry has helped the Lady Tops win as many games as they have. Having two polished seniors with high basketball IQs in important leadership roles takes some pressure off the rest of the team.

When asked of the fact that her time playing with Noble is coming to an end, Jones’ responded, “It’s hit. I don’t really like to think about it, but the time will come. After the season, it’ll be tough, but we’re going to enjoy it while it lasts.”

With two great careers ending, the two teammates have paved the way for many years of Lady Topper success. Between the two, there’s been four all-conference team selections and over 2,000-points scored. While the Lady Tops will still have a lot of returning pieces for next season, there will be something different about not seeing Noble and Jones run out of the locker room onto John Oldham Court.