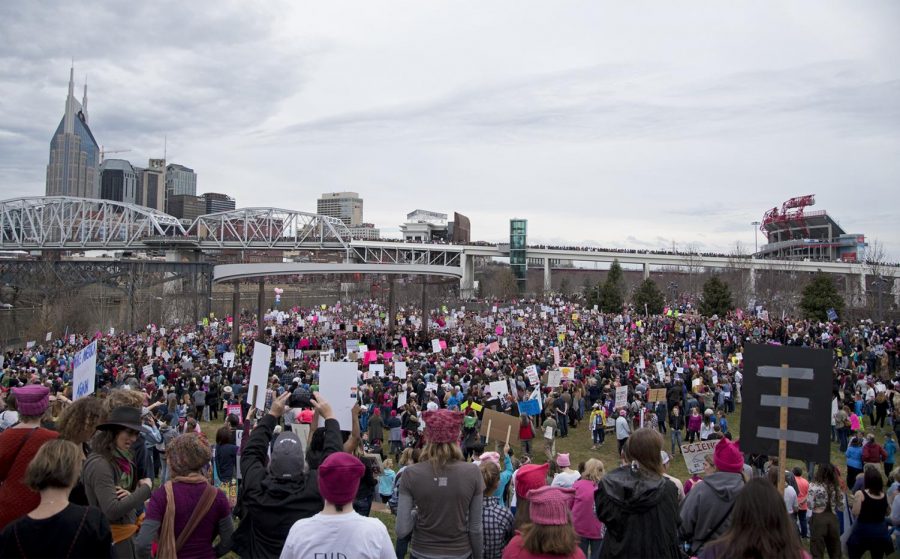 Cumberland Park in downtown Nashville, TN, was the starting place of the women's march on Saturday, January 21, 2017. The march brought 15,000 women, men, and children into solidarity and peace. "When we tire of the status quo, it is impossible for it to survive," said Kutonia Smith Bond of the Nashville Feminist Collective.

Nearly 30 WKU students hopped on a bus this past weekend to join more than 500,000 women’s rights protestors in Washington, D.C.

The Women’s March on Washington was held on Saturday and contributed to the turnout of more than 1 million men and women rallying around the U.S.

The mission of the marchers was to join in diversity to show a “presence in numbers too great to ignore,” according to the Women’s March official website. An estimated 4,814,000 “sister marchers” joined from around the world, with participating locations in all 50 states and in major cities across the globe according to the site.

The WKU Center for Citizenship and Social Justice sponsored a bus to take students to Washington, D.C. for the event, initially posting on Facebook to gauge interest in the trip.

Aeryn Darst, a recent WKU graduate and program support coordinator for CCSJ, said she was surprised by the response the center received after the Facebook post.

“We got a lot of interest,” Darst said. “We were expecting like 10 students to be interested.” Some students had to be put on a waitlist, she said, because of the limited transportation space.

The group left Bowling Green late Friday night, arriving in Washington, D.C. in the morning as the march began.

Leah Ashwill, CCSJ director, said she saw the Women’s March as the exact type of opportunity the center believes is important to expose students to.

“We really feel like this just empowers students to use their voice around issues that they’re passionate about,” Ashwill said.

Louisville sophomore Morgan Woodrum said minoring in gender and women’s studies played a role in her interest in attending the march this weekend. Learning about gender and other social issues around the world encouraged Woodrum to learn more about people and their differences, she explained.

Woodrum said she believes Americans still need to make their voices heard and take advantage of living in a democracy.

Though Woodrum has marched and participated in protests previously, she said nothing she had experienced compared to the capacity of the crowd she was a part of on Saturday.

Darst said she hoped the experience would provide students with a positive experience of political activism. The goal of CCSJ is to encourage interest in social justice and create a positive change and impact on the world, Darst explained.

“We want students to be inspired to fight for what they believe in no matter what that belief is,” Darst said, “to really have an invested outlook on their community at every single level, from personal community to worldwide.”

Before the march, Darst said she anticipated the experience building a sense of community among marchers and supporters of the cause, who all fight for a lot the same goals.

“There was never a moment that I felt unsafe,” Woodrum said. “It was safe, and there was a lot of unity between us.”

Bowling Green junior Alexa Hatcher said participating in the march made her realize how many people out there share her perspective.

“I tend to think of things a little bit more as an outsider,” Hatcher said. “Being there and seeing the amount of people who were there helped me realize that we are the majority. We are the popular vote. We are going to stand our ground, and this isn’t the end.”

Hatcher said she believes the unity is important, and marching does make a difference.

“That’s why it’s important, because of the domino effect,” she said. “We are standing up for what’s right, and it’s recognized.”

Hatcher recalled one chant she heard radiating throughout the crowds during the march: “we’re here to stay, how do you like your first day.”

“I thought that was awesome, and it kind of proves what we’re talking about,” she said. “We’re here, and we’re staying here.”

Several activists spoke to the crowd on Saturday, including actress Scarlett Johansson, who Hatcher said she was able to watch on one of the screens lining the streets. Hatcher said Johansson’s speech connected to her on a personal level when she spoke about the defunding of Planned Parenthood. Hatcher said addressing these issues on a local level where they most affect individuals is how outcomes can be changed.

With recent events, Darst said she sees a lot of people who are realizing their place in the world and want that place to change.

“The way I see it, and I’m pretty sure Leah would share this opinion as well, is that there are a lot of reasons to be interested in something like this, no matter what your background is or your identities or anything,” Darst said. “There’s a lot of involvement so it’s kind of like a personal interpretation from a lot of students to say why it’s important to them.”