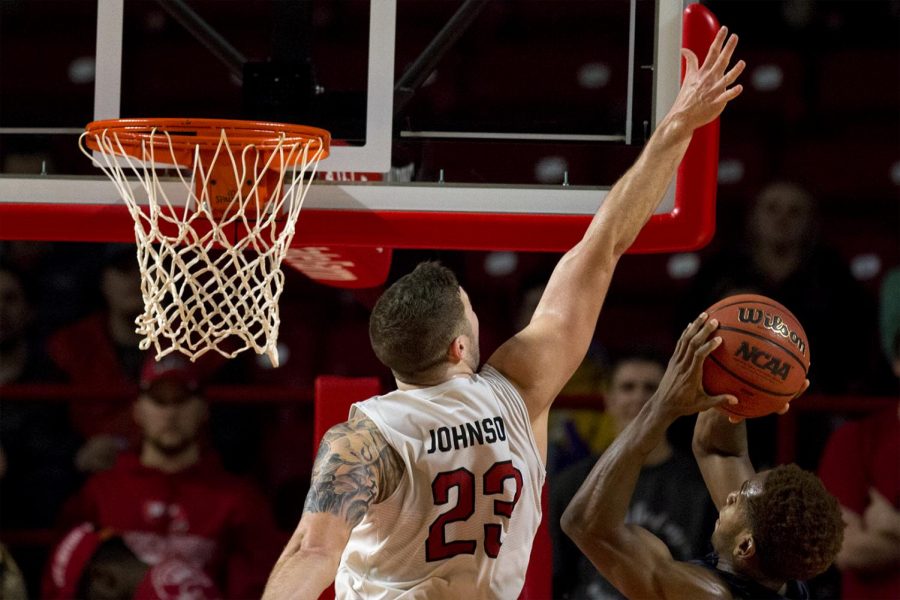 WKU picked up a second consecutive win Saturday with an 81-66 win over the University of Texas San Antonio as junior forward Justin Johnson led the way with a double-double.

The Toppers (11-11, 5-4 C-USA) started the game on a positive note, securing the tip followed by a slam dunk from Johnson that would set the tone for the rest of the game. WKU built a 23-point lead with 10:27 to play in the first half and was up by eight heading in to the halftime.

After the break Head Coach Rick Stansbury and the Tops came out looking to further the lead. They did just that. The lead was back up to 19 with 14:47 left in the game.

The players recognized that what Stansbury has being saying all season long about “putting a foot on somebody’s throat” has been true. When the Tops came out of halftime with the foot on the gas they were able to attack the opponent and put the game out of reach going up by as many as 23 in the second half.

“I think some people are seeing too that things are starting to click a little bit for us,” Johnson said. “You know, chemistry was there, extra pass was there and we came out of halftime and we talked about it before coach and them got in there was the thing we wanted to do you know come out coach calls it put a foot on their throat and you know take their hope away and that’s what we did.”

The win over the Road Runners was one of the best 40-minute performances the Tops have put together all year, as they led the game from start to finish and outworked UTEP in all aspects of the game.

Senior point guard Junior Lomomba tied his season and career-high in assists for the fourth time this season as he dished out seven assists while putting up eight points on 3-4 shooting. The Providence transfer only had four turnovers in 26 minutes of play.

“We need him to play well and we need him to be productive for us,” Stansbury said of Lomomba. “He gave us seven assists, eight points and it’s probably a long time since we had both of those from him. We need him in every way. He makes us better for sure.”

Justin Johnson led all scorers with 21 points while grabbing 10 rebounds along with two assists. Que Johnson followed closely with 19 points, six rebounds and two assists of his own. Coming off a 25-point outing on Thursday night, senior guard Pancake Thomas was the only other Hilltopper in double figures. Thomas ended his night with 11 points, three boards and three assists.

“This is one game that we put both halves together,” senior guard Que Johnson said.

The team will be back in action Thursday February second when they take on the Louisiana Tech Bulldogs. Tip-off is set for 7 p.m. in Ruston Louisiana.