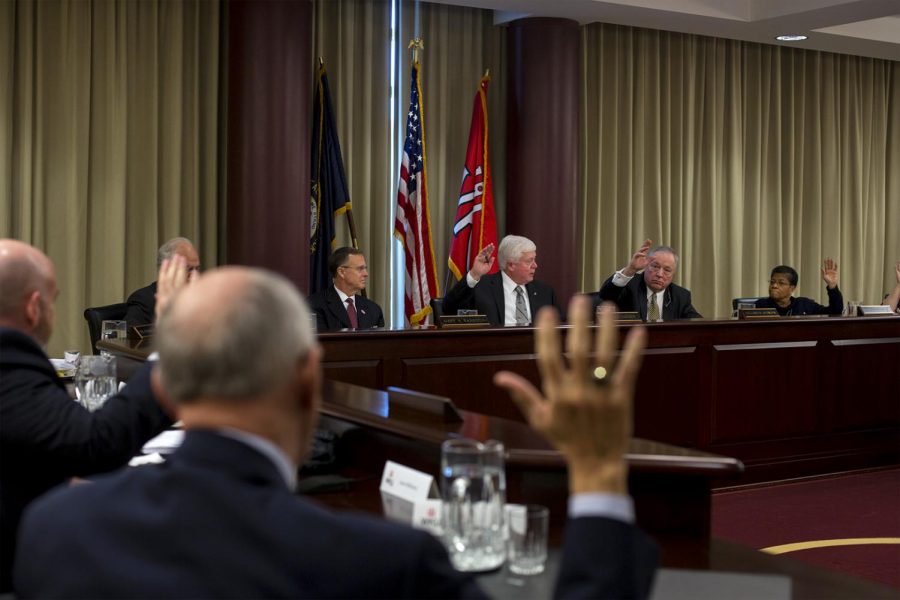 The Board of Regents votes for candidate Tim Caboni as the 10th president of Western Kentucky University on Friday at its quarterly meeting.

The Board of Regents unanimously approved Tim Caboni as the 10th president of WKU and approved Head Football Coach Mike Sanford’s contract at its meeting Friday.

Caboni was announced as the preferred candidate for the presidency on Jan. 18 and spent the past three days meeting with students, faculty and staff on campus.

“Above all, we knew that the 10th president would also have to have a track record signifying a passion for student success and academic excellence,” said Regent Phillip Bale.

The Board also voted to approve the contract for football head coach Mike Sanford. The contract will be in effect for at least four years, and Sanford’s base salary is set at $800,000. Sanford will be eligible to receive bonuses depending on the football team’s success.

Some regents expressed concern over the salary amount and said the university is judged based on what it pays certain people, while others agreed that athletics play a large role in publicizing the university.

“We lose some of our best people because of our inability to be competitive in the marketplace and send a message that our faculty and our staff are valued in ways that that becomes a priority,” said Faculty Regent Barbara Burch.

“I don’t envision us moving off of that number by very much,” said Director of Athletics Todd Stewart. “I think that’s a fair and healthy number.”

If Sanford chooses to terminate the contract before March 1, 2018, he will be obligated to pay $1.5 million to the university. Sanford’s termination fee decreases each year until after March 1, 2020 when the fee becomes $600,000.

The Board approved three new certificates and degrees proposed last meeting: an Education Specialist degree in Gifted Education and Talent Development and graduate certificates in both Advanced Behavioral Management and College and Career Readiness.

The Board also approved a motion to rename the Honors College at WKU to The Dixie and Peter Mahurin Honors College. The Mahurins are both alumni of WKU and were named WKU’s Philanthropists of the Year in 2011.

Finally, the Board voted to table the first reading of several changes to its bylaws, including a change that would make the board chairperson the only member with the authority to speak for the board.

The second quarterly Board of Regents meeting will take place on April 28.