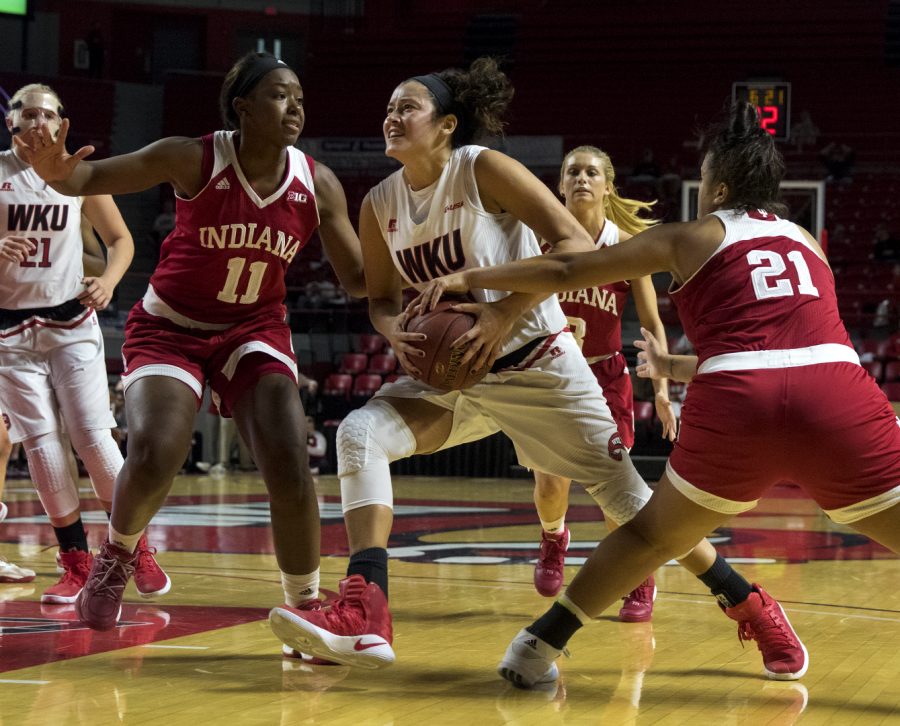 The Western Kentucky women’s basketball team played nearly perfect for the entire course of Sunday’s game against rival Middle Tennessee State, overwhelming the Blue Raiders in a 66-51 victory inside in Diddle Arena.

“They were just a better team,” MTSU head coach Rick Insell said. “You’ve got to take your hat off for them. They did a good job – a real good job. They shot the ball well, passed the ball well, got a lot of deflections. We came out lethargic and just didn’t execute.”

WKU’s victory gave the program its first winning streak over the Blue Raiders since winning four-straight from March 1, 2003 to February 26, 2004.

“I guess,” redshirt senior guard Kendall Noble responded with when asked if this was a statement win. “Any win is a big win in conference (play), I think. It’s nice to win and beat Middle (Tennessee) and stay on a win streak.”

Noble led the charge for WKU with 18 points on 6-of-12 shooting, six rebounds and five assists. Along with Noble’s big day, junior forward Ivy Brown dropped 14 points for the Lady Tops, who won their third-straight contest.

“I think our defense helped us get into the flow of our offense,” Brown said. “We got stops, pressed them, turned them over and that led into our offense. We played how we wanted to play.”

At the 5:45 mark of the opening quarter, the Lady Toppers had already forced four Middle Tennessee turnovers and were keeping the Blue Raiders from getting anything going offensively. WKU was shooting just 1-of-7 from the floor, but led 4-0 as Ivy Brown and redshirt junior forward Kyvin Goodin-Rogers each had two points.

Middle would respond with back-to-back buckets, but the Lady Tops still carried all of the momentum after Goodin-Rogers nailed a three-pointer and junior forward Tashia Brown hit a pull-up jumper. At the time, WKU held a 11-4 advantage but went on to score six more points and force four more Blue Raider turnovers throughout the remainder of the period, leading 17-9 after one quarter.

“We needed a game like this,” Ivy Brown said. “Our defense was our big stopper and we’ve struggled a lot with defense, but tonight we came out and put it on early and we stayed on them.”

It took a little time before either side could get into a rhythm in the second. It wasn’t until the 5:25 mark of the quarter that the Lady Toppers would add to their scoreboard on freshman guard Whitney Creech’s jumper. WKU’s defensive game would carry over to the ensuing 10 minutes, as it continued to force turnovers. With 2:43 remaining in the first half, the Lady Toppers led by double digits at 25-15.

WKU went on to add seven more points to its side of the stat sheet and led 31-15 at intermission.

Tashia Brown led the way for the Lady Tops after two full periods with 12 points on 6-of-9 shooting. The Blue Raiders, as a team, shot 6-of-18 from the floor in the half.

WKU opened the second half with a big three from Ivy Brown and shortly led by 22 points at 37-15 at the 7:41 mark of the third.

WKU was well on its way to another tally in the win column, up 57-29 heading into the final quarter of the affair.

“I think every game, as coaches, we try to talk to them about statements on the things we need to do to keep getting better,” Clark-Heard said. “I would have to say that for the first three quarters of basketball we played as well as we have played in a while, and especially on the defensive end.”

WKU returns to action on Saturday, Jan. 21 against Marshall. That game is scheduled to tipoff at 2 p.m.

“You know, it’s gonna be great,” Noble said with a chuckle when asked if how big this break is going to be for the team. “I mean, I think we’re a little tired and it’ll be good for our bodies and hopefully get everybody healthy and ready for Saturday.”