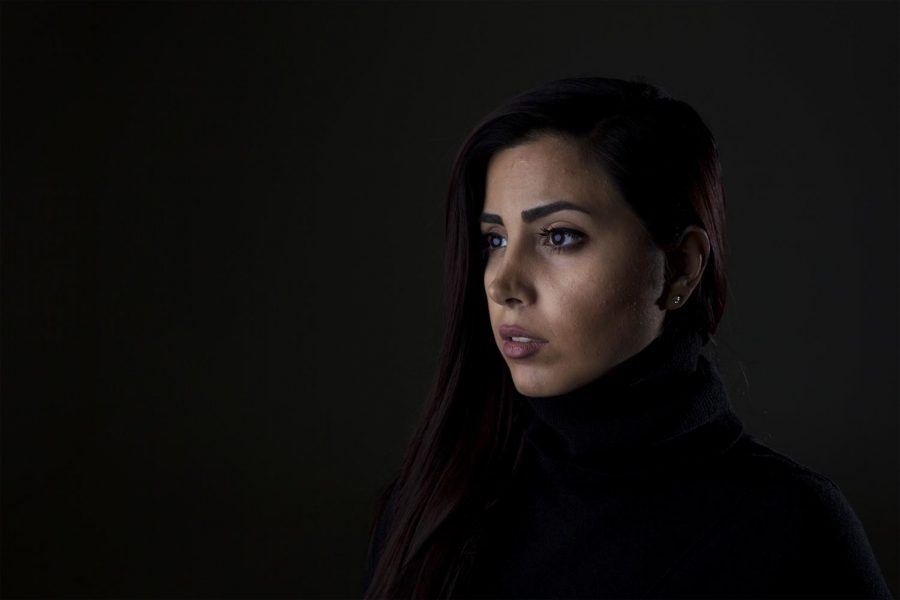 When President Donald J. Trump announced an executive order, banning legal visitors from 7 Muslim majority countries, Elnaz Jalali was faced with the decision to sacrifice her dream or to be separated from her family living in Iran. “After 5 years staying in the U.S., investing my money, my time, my energy and my knowledge over here, if I wake up one day and someone says: ‘what you did over here is done and you should go back home.’" Jalali said. Jalali is in her final semester studying for a masters in chemistry but hoped to pursue a doctorate post graduation. “I’m terrified it doesn’t end here. Imagine for five years I won’t be able to go back home to visit my parents and my parents won’t be able to come here. I can’t live without my parents," Jalali said.

The past two years in the United States have been filled with emotion, fear and disillusionment for Iranian student Elnaz Jalali. Her long-term dreams of pursuing a doctorate degree and becoming a research scientist are now masked by an uncertainty of how the temporary immigration ban will affect her life in the U.S.

“When I came over here, I thought the only thing I had to focus on was my studies,” Jalali said. “But now, my studies are the least of my worries.”

“We don’t want them here,” Trump said of Islamist terrorists during a signing ceremony at the Pentagon. “We want to ensure that we are not admitting into our country the very threats our soldiers are fighting overseas. We only want to admit those into our country who will support our country, and love deeply our people.”

After graduating with a bachelor’s degree in chemistry from a university in Iran, Jalali came to WKU to be a part of the master’s program in Chemistry. Two days prior to the ban, she was accepted into the Pharmaceutical Sciences PhD program at the University of Kentucky.

But last Friday, while Jalali was attending a laboratory class at the top of the Hill, everything changed.

When Jalali heard the news that a temporary immigration ban had been placed on her country, she was stunned with overwhelming emotion and tears filled her eyes.

“They don’t think about the people who are living over here, who are citizens, who have a green card, but have family in Iran,” she said. “We cannot cut the relationship between the families. Right now, I do not know what I am going to do.”

Family has always been a major part of Jalali’s life. She was looking forward to being reunited with her parents again during graduation in May. But with the temporary ban, these plans are slowly dwindling.

On Jan. 17, Jalali’s parents traveled to an American Embassy in Dubai, United Arab Emirates, more than 2,000 miles away from their home, to interview for a “Visitor Visa.”

With the WKU Graduate School Commencement Ceremony occurring on May 12, Jalali’s family felt applying for visas four months prior to traveling would be more than enough time to get them processed.

“Right now, after this 90 day ban, I’m sure they cannot get the VISA and come for my graduation,” Jalali said. “It really hurts because they have spent this much money for me and they’ve been away from their daughter for a long time. They just wanted to be here for my graduation; that’s all.”

While Jalali has enjoyed her time studying at WKU, she is disheartened this is the way her master’s education has to end.

“I’m not even going to attend the graduation ceremony if they don’t come,” she said.

Jalali is one of 22 international students studying at WKU from the seven temporarily banned countries, according to university officials.

“Our international students are important members of the University family,” said President Gary Ransdell in a release. “We are working to fully understand all the variables in play, but it is important that our international students feel safe and know that they are welcome here. We will work to ensure that each of them stays on track to graduate.”

With this temporary immigration ban, WKU has recommended these students do not travel outside of the country at this time.

The insecurity Jalali is feeling has led her to look outside of the U.S. for another PhD program. She has already started the process of applying to Canadian programs in pursuit of becoming a research scientist.

“After five years staying in the U.S., investing my money, my time, my energy and my knowledge over here, if I wake up one day and someone says: ‘what you did over here is done and you should go back home,’ what do I do after that? What is going to be my future? I feel so terrified about it,” she said pondering if she should stay in the U.S. to study for five more years.

Jalali initially came to the U.S. because of the numerous research opportunities in her field of chemistry. She felt it would aid her pursuit of researching for medicinal cure to cancer — something near and dear to her heart.

“I would love to put my life towards research and at least, improve whatever is going on,” she said. “At least, I can do that. I might not be able to find the cure for cancer, but at least I can try for it.”

Becoming a research scientist is an opportunity not widely offered to Jalali in Iran. “I didn’t have any future in Iran in my major. There is no opportunity for people who want to do research.”

But now Jalali must decide to return to Iran and risk not being re-granted another student visa, to stay in the U.S. and risk not seeing her family for upwards of five years or to give up her spot in the PhD program at UK and pursue a degree in Canada.

This is a choice that has been weighing on Jalali’s mind for days.

“I’m sure if I go back to Iran I am not going to be happy there because I cannot do what I want or study what I want,” she said. “Of course I want to stay somewhere that has freedom. The most important difference is the freedom.”

Jalali feels since she is from Iran, she is associated with many “misconceptions” about her country and its government.

“Because I have an Iranian passport, I have to deal with everything that is going on right now between the two governments,” she said.

While she is from a predominantly Muslim nation, Jalali is not religious.

“I was born in Iran so I had to be Muslim, but I believe in no religion. I am not religious at all,” she said. “Even my people are tired of terrorism, of everything.”

Although Trump signed the executive order temporarily banning immigrants from her nation, Jalali does not place blame solely on him.

“It’s not just about Trump, it’s about what the people want, the people who voted for him,” she said. “He was a very honest candidate. He said I’m going to build a wall, ban the refugees to come and in just one week — he did.”

Jalali thinks, moving forward, people should try to educate themselves about the history of Arab nations, the war in Syria and try to understand the countries, rather than knowing only what they see in the news.

“Sometimes you should put yourself in someone else’s position, their situation and see if it was happening to you, how would you feel?” she asked.

Correction: A previous version of this story said Dubai was located in Saudi Arabia. It is located in the United Arab Emirates. Also, it said Jalali has been accepted into a Medicinal, Bioorganic and Computational Chemistry PhD program. It is actually Pharmaceutical Sciences with a minor in Medicinal Chemistry. The Herald Regrets the errors.