Reigning Regents: Shared governance must be more than a concept 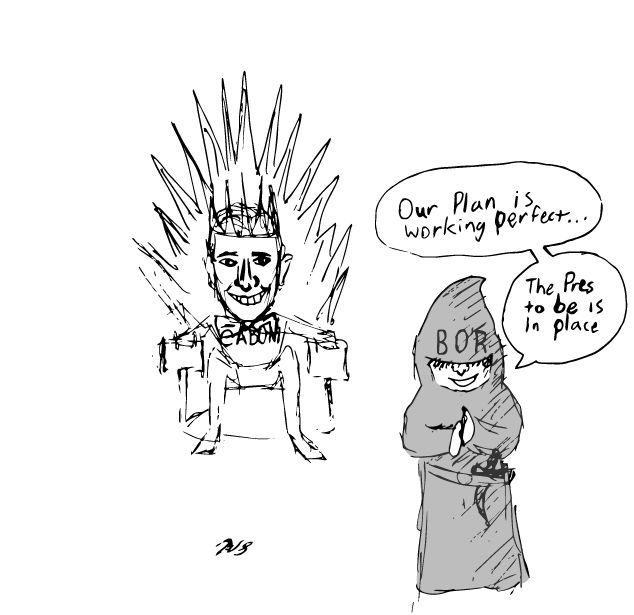 The issue: The Presidential Search Committee and the Board of Regents for months refused to answer the question of whether the search for WKU’s next president would be an open search. Now it’s too little too late to have that discussion.

Our stance:  The lack of transparency in this process has been atrocious. It’s time we redefine the concept of shared governance at this university and what it means for us all moving forward.

If you haven’t heard it yet, you can read it here first, folks. Tim Caboni, current vice chancellor for public affairs at the University of Kansas, was named the preferred candidate to be the next president of WKU.

The Board of Regents will extend a formal offer to Caboni for the presidency at its meeting this Friday. Which is to say it’s all a done deal, it’s clear he’s going to be the next president.

You don’t have a public reception and public announcement unless it’s a done deal. However, if the board decided to extend an offer to someone else other than Caboni, then we all will have been thoroughly bamboozled. Until the board acts, he is still only the preferred presidential candidate.

Caboni is being offered up to us on a silver platter, bowtie and all, as the board carefully inserts a tube down our throats and straps us to a gurney, so we’re unable to voice issue with what it has done.

Our intention here is not to demonize Caboni’s  potential presidency before it even begins. A few of us on the editorial board had a phone interview with him, and we honestly look forward to getting to know him better. However, the veil of secrecy perpetrated by the search committee and the board is appalling.

Back in September, we editorialized the issue of a closed search when it was first revealed that Isaacson, Miller, the search firm aiding the Presidential Search Committee, intended to keep the search closed. The search committee obediently followed along ever since.

For the search to be open, the full Board of Regents needed to vote on the matter, but ever since September that action was not taken. It was likely never even up for consideration. The board’s intention to ever vote on the matter is a bald-faced lie in of itself as they kept us all in limbo for months.

Let us not be fooled on the matter. The Presidential Search Committee was made up of six sitting regents, meaning they had a quorum. The search committee itself had the minimum number needed to act as the board on matters if necessary, but it elected to play the man behind the curtain.

We said it in September, and we’ll say it again, we paid Isaacson, Miller to the tune of $185,000 to whisper in the board’s ear. This is a large sum of money when you consider a study published in the Chronicle of Higher Education found the average costs of hiring a search firm was $79,000.

Search firms have increasingly become the norm for universities, but not everyone is sure they’re the best option.

Michael Poliakoff, now president of the American Council of Trustees and Alumni, in a 2014 interview with the Omaha World-Herald in regards to the University of Nebraska searching for a new president, said search firms are the most common method for universities, but the ACTA recommends “leaders consider consultants to help structure, but not run, a search.”

Since there’s been little to no transparency in the search, we have no idea how much control was given to Isaacson, Miller. Did Isaacson, Miller waltz in with a short list of preferred candidates one day as the search committee discussed the complete snub of the hit animated film “Lego Movie” in the 2015 Oscars? It’s possible, who’s to really say?

According to Poliakoff, it’s always the search firms who benefit financially as well as the new president in these closed searches. Poliakoff noted a connection between the jump in average salaries for college presidents and the use of corporate headhunters.

“Sometimes headhunters are shuffling sitting presidents from one job to another and getting them a higher salary with each move,” he said to the World-Herald. “Though many firms offer a flat fee, it’s also common for them to charge one-third of the new hire’s first year’s pay.”

We’ll be paying careful attention to the contract that’s drawn up for Caboni and how heavy of a hand Isaacson, Miller may be playing in it.

But for what reason are these searches conducted in the parking lot of Arby’s at 2 in the morning, or so we assume. One main reason boiled down to the idea of confidentiality.

Regent Philip Bale said to a Herald reporter without a guarantee of confidentiality many of the applicants would not have applied for the position. This runs counter to a 2015 statement issued by the American Association of University Professors.

“The rationale for such secrecy is that open meetings discourage applications from highly qualified candidates, although no evidence has ever been offered to suggest that this is in fact the case,” the statement reads.

The search committee and the board members kept the confidentiality aspect running so much they elected to meet out of state with candidates, and their meeting in early January wasn’t the first time they did so.

In fact, meeting outside the state isn’t out of the ordinary for presidential search committees.

Back in 2015, the University of Iowa Board of Regents’ search committee interviewed presidential candidates at a Chicago airport because it “afforded a higher degree of confidentiality, as it was unlikely that any of the candidates would be singled out in the throng of transients as being there as candidates for the Iowa presidency,” according to a report by the AAUP.

Student Regent Jay Todd Richey told a Herald reporter many of the candidates valued confidentiality and preferred to remain unknown to the WKU community.

But Caboni himself has never had an issue with letting the public know he was being considered for administrative level positions at other universities.

“Many of the candidates don’t want to risk jeopardizing the position they hold with taking a new opportunity,” Richey said.

The Herald can confirm Caboni did indeed keep his job at University of Kansas after it was revealed he was a candidate at both schools; thus not affecting his employment or potential candidacy.

Frank LoMonte, executive director of the Student Press Law Center, called the use of closed searches “fundamentally undemocratic” in a 2014 interview with Kentwired.

“There is really only one reason to do a closed search, and that is to protect the ego of the candidates who don’t get selected. That’s it,” LoMonte said to Kentwired. “There’s no other reason to deny the public access to information about the candidates and the opportunity to question them.”

Did the board sacrifice meaningful engagement with the campus community to spare the fragile egos of those they passed over for the job? Again, who’s to say? We’ve all been locked out of the room since this began.

Sure, they held forums before the search was fully under way, but so what? We were never given the opportunity to know if our input was taken seriously since we never got to meet any of the candidates.

The bare minimum the board could have done was hold open forums with the final four candidates it had been considering since early this month, but it seems even setting the bar that low was too much of a hurdle for the board. After all, as far as the public knew, a final decision wasn’t supposed to come until March.

The entire month of February could have been dedicated to meeting the four final candidates. Each of them could have gotten an entire week for us to meet them, for them to get to know the campus and community. But the silver platter has already been polished.

Where then do we go from here? We could demand the board hold open forums for the four candidates it considered earlier this month, but that’d be more of a disservice to those people than anyone else. They’re likely candidates at other colleges and have already moved on.

From here it’s our responsibility as a newspaper to keep everyone informed about the details surrounding to Caboni’s potential presidency and our continued responsibility to report on actions taken by the board.

We’ll be front and center for the open forums this Thursday. If you’re unable to make it, follow us along on Facebook where we’ll be live streaming all of them and on Twitter for continued coverage.

But it’s our collective responsibility to care about what’s happening, to attend the forums if you can and to ask questions yourselves.

As for the board, a strong redefinition is in order for how it makes decisions. Part of the board’s code of ethics is “to accept the spirit of academic freedom and shared governance as fundamental characteristics of University governance.”

For us on the editorial board, the idea of shared governance means everyone should have a say in how the board operates and in the decision-making process; yet, this definition is not shared by our administrators.

During the Herald meeting with the Administrative Council, one of our editors posed a question about the idea of shared governance and if it runs contrary to having an open search. President Gary Ransdell enlightened us on what the term actually means.

In Ransdell’s opinion, shared governance does not mean everybody shares in every decision. The board has its responsibilities, faculty has some, the administration has some and as does staff.

Interestingly enough, students were not included in this list. Apparently, the responsibilities of students at WKU lie solely in academic performance for the sake of the university and not having a role in shaping this university’s decisions.

“It doesn’t mean everybody is engaged in every decision,” Ransdell said.

Ransdell believes the term of shared governance is used too loosely in regards to specific responsibilities for segments of the campus population. In our opinion, one can rarely be too loose when talking about a democratic process of sharing governance in what happens at our university.

This lack of confidence in the board is reflected in the Fall 2015/ Spring 2016 Faculty Work Life Survey.

Shared governance needs to be more than a mere idea at this university. The board must work harder to engage with the campus community, and that includes the sitting regents making an effort to learn who they’re representing and what those people are concerned about.

The flip side is true as well, we as a collective need to know who these people are to better understand how the university works and to hold them accountable.

From here on out, we at the Herald will take this idea of shared governance and make it more practical, more democratic, more inclusive and worth something where everybody can be engaged in the decisions that affect them.

We hope everyone joins us in this radical endeavor called democracy.