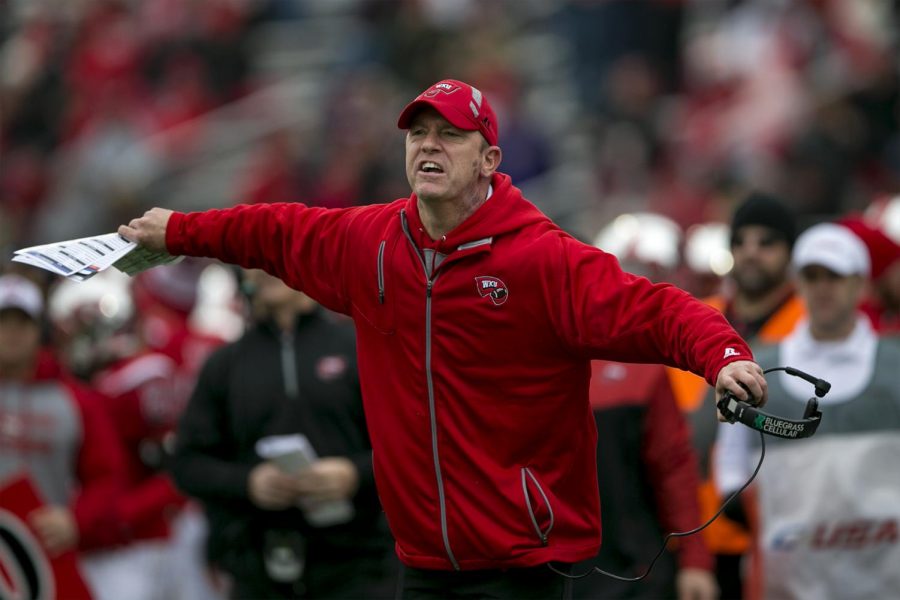 Head coach Jeff Brohm yells at the refs a after a call during the first half of the Conference USA Championship between WKU and Louisiana Tech on Dec. 3, 2016 at L.T. Smith Stadium. Kathryn Ziesig/HERALD

The now former WKU head coach met with his team this morning to tell them the news, and was introduced as the Boilermakers new head coach earlier this afternoon in West Lafayette, Illinois.

“As the athletic director I hate to lose him as a head coach,” WKU Athletic Director Todd Stewart said.  “As a friend I hate it because I truly enjoyed working with him every step of the way, but I completely understand it and I respect it and I wish him all the best. He gave our program everything he had and he deserves the opportunities to come because of the success he had here.”

Brohm’s contract with Purdue is for 6 years and is worth $20 million, according to multiple reports.

Stewart said that Brohm notified him of his decision at 8 a.m. Monday and “really thought it was a 50/50 situation” on whether Brohm would return or not at the end of Sunday.

“Jeff was tremendous throughout the whole thing,” Stewart said. “He really was, in my opinion, an absolute blueprint on how you would want to be communicated to going through something like this.”

Stewart said that he has no immediate plan for a timetable on the search for a new head coach, and that it’s more about “letting the process play out.”

“We obviously have a bowl game to play and we had an incredible season,” he said. “We really want the focus to be on the game right now. I think the program is at the point now where we owe it to the program to just do our due diligence and talk to a number of people.”

Stewart declined to name any specifics in terms of any candidates for the opening, and also said that he thinks he will reach out to Brohm for advice on the next hire.

“The person we will hire is the person who will keep this train rolling,” Stewart said.

“I’m confident that we will keep the train rolling,” Stewart said of the coaching search. “We have no margin for error.”

Brohm takes over a Purdue program that went 3-9 overall and 1-8 in the Big Ten Conference in 2016. The Boilermakers released former Head Coach Darrell Hazell in mid-October after recording a 9-33 overall record in three-plus seasons at Purdue. The school hired a new athletic director in Mike Bobinski in August.

In three seasons on the Hill, Brohm compiled a 30-10 record while capturing the first ever bowl win in program history in the 2014 Popeye’s Bahamas Bowl, and later led the team to three straight bowl appearances including the Boca Raton Bowl.

WKU earned its first national ranking in school history when it finished the season ranked 24th. He was also the first Head Coach in program history to win 20 games in his first two seasons, and the first to lead the program to consecutive double-digit win seasons.

When he was introduced Monday, Brohm became the 36th head coach in Purdue history. The Boilermakers open their 2017 season on Saturday, September 2 at Lucas Oil Stadium in Indianapolis against the former WKU head coach’s alma mater, the University of Louisville.