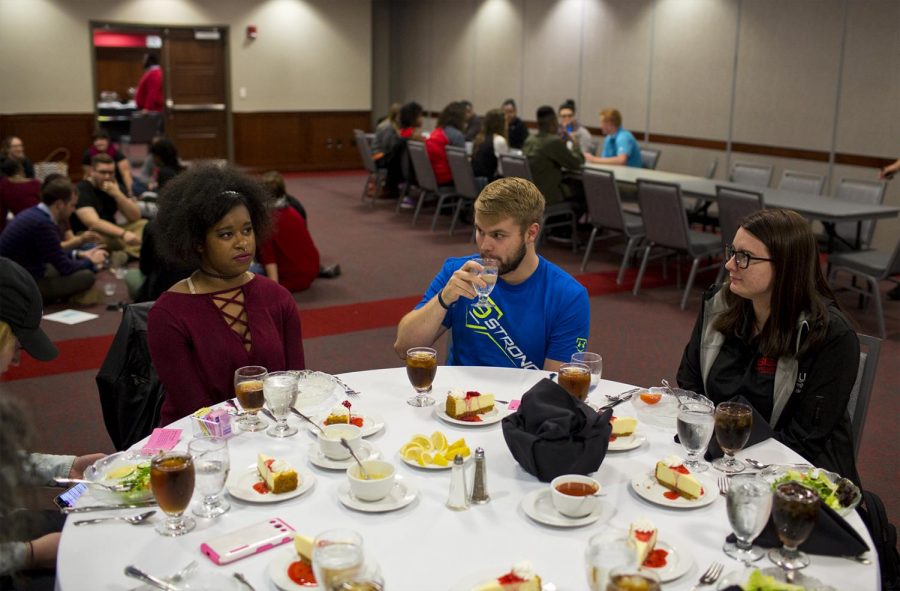 A chattering group of more than 50 WKU students and faculty crowded a Hunger Banquet hosted Tuesday night by the WKU Housing and Residence Life for the event’s second year.

“We thought it would be a great thing to do to bring hunger awareness around the world to students at WKU,” Minnette Ellis, assistant director of WKU Housing and Residence Life, said.

As students arrived to the banquet, they were each randomly assigned an income class, which would determine their meal for the night. Lower income attendees received a small cup of rice and a cup of water, to represent the meal of the average low income citizen of the world earning under just $986 per year.

“I wanted to learn more about being in someone else’s shoes on the hunger side,” Nashville sophomore Brittany Richardson said. “It was effective to learn about how other people don’t have as much as I do, and a cup of rice could be what feeds my whole family.”

“I gained more of an understanding as to how prevalent hunger is, and just how many people live in poverty,” Owensboro freshman Mackenzie Duvall said. “I just became more informed on the whole situation.”

In her presentation during the banquet, Ellis spoke about the 2.5 billion people living in poverty around the world, encouraging people in attendance to consider how bad situations are in other parts of the world. She also brought up the fact that over 925 million people suffer from chronic hunger worldwide.

“I wanted people to learn about people outside of themselves, what happens internationally, what hunger can look and feel like,” Ellis explained.

“My takeaway was that students, in particular, have to think about where they come from,” Jackie Pillow, coordinator of retention initiatives, said. “They need to think about people that are less fortunate than them. I think it was great to see the students realize the privilege they had, not even knowing that they had one.”

As the banquet wrapped up, everyone in attendance received a full meal consisting of pasta, chicken, salad, garlic bread, and cake. Some students felt humbled by the overall experience, including senior Emily Spink.