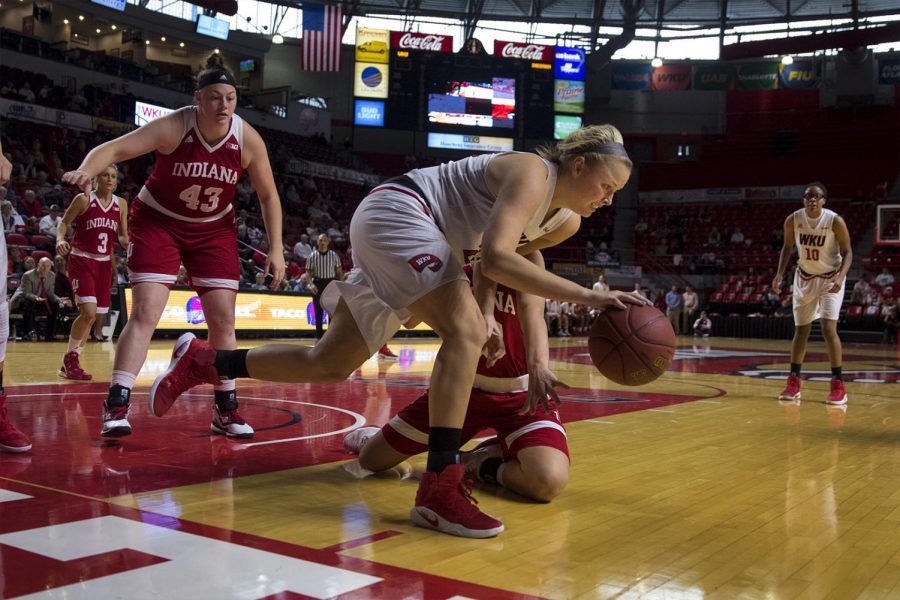 At the end of the third quarter, the WKU women’s basketball team (7-4) held a two-point lead over the College of Charleston, but thanks to a 29-point fourth quarter, the Lady Tops defeated the Lady Cougars 89-76.

WKU was led by junior forward Ivy Brown who grabbed a career-high 17 rebounds while also managing to score a team-high 21 points in the game.

“My main focus every game is just to crash the boards,” Ivy Brown said. “I don’t really care about scoring, just mostly about getting those rebounds.”

The Lady Tops controlled the game for the majority of the first half as they took a 42-31 lead into the locker room at halftime.

However, a series of mistakes in the second half led to a College of Charleston comeback as the Lady Cougars outscored WKU 27-18 in the third quarter.

“This was a game where some adversity hit and it was good to see how our kids were going to respond,” Head Coach Michelle Clark-Heard said. “Every game is different as we talked about. We didn’t really play smart at times. I’m just really glad that as a group we were able to settle down.”

WKU responded with 10 straight points and the Cougars were unable to close any tighter than six points down the stretch as the Lady Toppers claimed the 89-76 victory.

“We went back to a 1-2-2 press and the players on the floor dictate how we play,” Clark-Heard said about the team’s fourth quarter run. “A lot of them were getting hands on balls and getting steals. The way we play is defensively and I think in the fourth quarter it showed.”

Freshman guard Whitney Creech had one of her best games in her young WKU career as the Jenkins, Kentucky native scored 17 points off the bench along with four rebounds.

“It’s awesome to have that spark off the bench,” Ivy Brown said about Creech. “She is playing awesome and you can tell each and every game that her confidence is going up more and more.”

WKU will be back in action on Wednesday night at 5:30 p.m. as they will take on Ball State University in E.A. Diddle Arena.