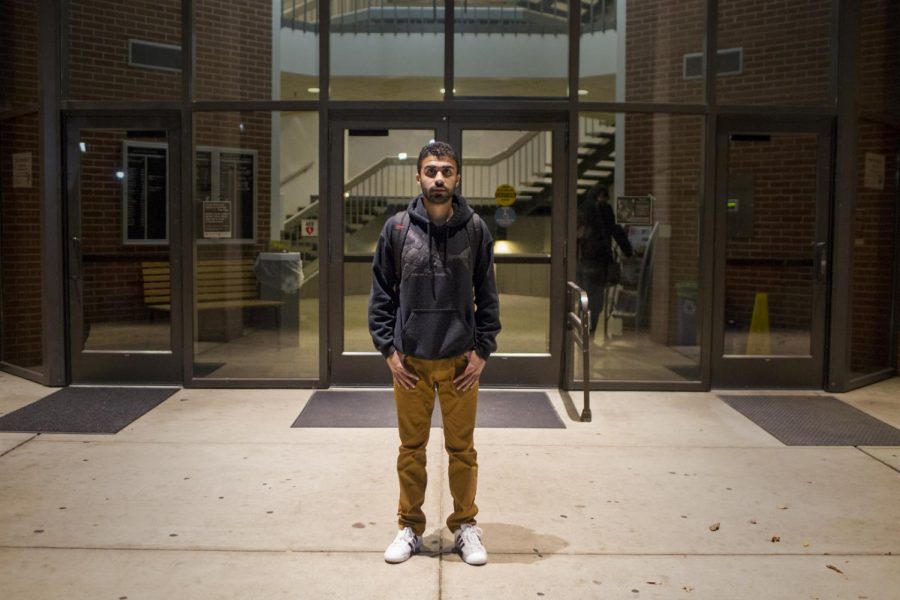 Ali Alessa, an International student from Saudi Arabia, is a junior studying manufacturing technology engineering. Alessa has been in the U.S. for 4 and a half years. Tyger Williams/HERALD

Ali Alessa sat on a bench in Cherry Hall and waited for his technical writing night class to begin.

It’s a class different from his field of study: manufacturing technology engineering. He said his English classes are sometimes challenging because of his language barrier, despite being in the U.S. for more than four years.

Alessa had a presentation to give, which meant he would have to speak in front of the whole class.

“It is hard sometimes to communicate,” Alessa said. “Sometimes I feel like people don’t know what I’m saying.”

Alessa is a senior from eastern Saudi Arabia. He is one of 1,168 international students currently enrolled at WKU. Whatever the reason for being here, being an international resident in Bowling Green carries its victories, but also hardships.

“You want to commend them for taking the initiative to be here,” Stephanie Sieggreen, WKU executive director of International Enrollment Management, said.

“I think that’s quite courageous for someone to uproot themselves,” Sieggreen said. “You’re here to educate yourself, but you’re also here to educate the local community.”

Students hurried through Downing Student Union during a busy afternoon rush as Eunyoung “Hayley” Choi ordered her green tea Frappuccino from Starbucks. She spoke with the barista with a Korean accent and a smile.

As a junior exchange student from Changwon, South Korea, she recalled her first experience in the U.S.

“My first day in the U.S. had heavy snow,” Hayley Choi said. “So, all the campus was closed. I thought campus was so big. My first impression of WKU was it was pretty, but it wasn’t open. Orientation was cancelled due to the heavy snow. I was so embarrassed.”

Hayley Choi is an English major, which was a deciding factor that made her come to the U.S.

“The purpose to come here was to improve my English,” she said. “I chose here because there are not many Korean students here.”

For many international students, the struggles don’t end once they reach WKU’s campus. Hayley Choi said one of her hardships is navigating Bowling Green without a car.

“I have to find a ride to places like the airport or to eat out or something,” Hayley Choi said. “It’s kind of troublesome for me.”

“In Korea, we have very nice transportation,” Joy Choi said. “We can live without a car, but here I cannot live without a car. Like, if I want to go to the mall, I have to find someone to give me a ride. It’s kind of difficult. I feel sorry for asking to ride with my friends.”

Wesley Anne Watkins, academic adviser for international students, said her advisees often come to her for both academic and personal issues they face.

“International students face the same basic concerns that all other WKU student’s face, both academic and personal because they are so intertwined,” Watkins said. “This adjustment period is new, exciting and terrifying all rolled into one. Along with this new learning experience, I encourage all students I interact with to ask questions and to use campus and community resources to ensure success.”

Alessa’s home country, Saudi Arabia, makes up the largest percentage of WKU international students with 501 Saudi Arabian students this fall. That number grew from 174 in 2011, 13 in 2006, and one student in 2001. However, Alessa said it is getting harder for Saudi Arabians to seek an American education.

Many international students have difficulty with miscommunication, which presents conflicts in not only everyday conversations, but in classes.

“Communicating is very hard sometimes,” Joy Choi said. “At first, I didn’t really understand what my professor was saying. So, I just pretended to understand. I should have asked, but I’m kind of shy.”

Coupled with these hardships is how people in the Bowling Green area view and treat students from other countries.

Rafey Wahlah, a senior from Pakistan, agrees with many international students that the majority of domestic people treat him fairly.

“I really believe the system here is fair but there are instances where I’ve felt there is some hesitance,” Wahlah said. “People often stereotype me, but I guess that’s part of every society. I normally try to ignore and move on with my life.”

Wahlah said people often misinterpret where he is from and assume he is Indian. Joy Choi related to that.

“One day I was heading to class and one American guy told me ‘Nihao,’ which is Chinese for ‘hello,’” Joy Choi said. “I felt bad because it wasn’t my first time to hear it. I hope people don’t think ‘Asian’ is the same as ‘Chinese.’”

“Some people, when we go and speak with them with the accent, they understand but they say ‘What? What?’ ‘What do you mean?’” Wahlah said. “Then they pronounce words the same as you say. That’s just a little bit of people. I’m treated fair for the most part.”

While few of these mistreatments are intentional, some people from other countries feel neglected because some American students don’t know how to interact with them.

“I think the people I’ve met so far have been so kind, especially the international leaders and the exchange student mentors,” Hayley Choi said. “Other friends I’ve made are kind, but sometimes classmates can be kind of cold.”

Hayley Choi said she didn’t believe other students were being cold on purpose, but were probably unfamiliar with how to communicate with someone from another culture. It took a little effort on her part, but Hayley Choi said she has met some really great friends in her classes this semester.

“This semester, I decided to get close with professors,” Hayley Choi said. “So, I almost gave up, but one of my classmates emailed me and said she could feel how difficult it can be and she could help study for my exam. So she was so sweet. She invited me this Thanksgiving to her Thanksgiving meal.”

Despite struggles, the Bowling Green community continues to grow with international diversity as students like Alessa consider making a life in the place they received their opportunity for education.

“I graduated from high school and I wasn’t excited at all to come to the U.S.,” Alessa said. “It was far away from my family, but I couldn’t find a job or any higher education. So, my dad had me go to the U.S. because ‘Your brother and sister are studying there. So you’re going to go there.’”

Alessa said he now loves being here with his young daughter who was born an American citizen. He said he looks forward to staying in the U.S. to find a job so that he may live as an American with Saudi Arabian flare.