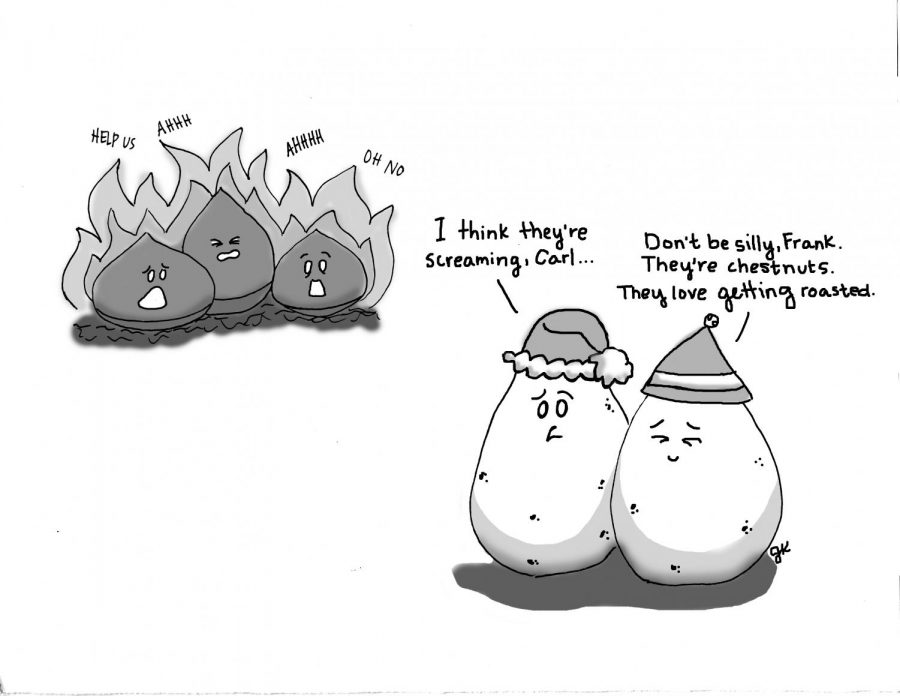 Chestnuts roasting on an open fire

That’s all she wrote, folks. The holiday season is arriving as the semester begins to pummel us in ways we didn’t know possible. As with every semester, we at the Herald have been given a lot to write about. As thanks for your generosity, we take this time to return the favor.

To the Medical Center, we’re giving you all a prescription for some pain relievers and ice. It must be hard to deal with the constant whiplash of lawsuits and questions. See you soon?

For the presidential search committee, we’d like to give each of you your own personalized shot glass. We know choosing the next president can be difficult. Plus, it’d be nice to have something transparent in the committee for once.

To our friends over on Twitter at WKU Greek Humor, we extend the gift of gag. You all, or at least one person, seem to be moving away from your self-proclaimed “humor.” At least try to stick with your brand name.

We’d like to give the newly elected Bowling Green City Commissioners the gift of empathy. Hopefully that will be enough for them to finally pass a fairness ordinance and the Uniform Residential Landlord and Tenant Act.

Potter College of Arts and Letters gets a beautiful life preserver for all their remaining faculty. Are the department heads seeing some icebergs we aren’t?

A new campus map is the perfect gift for students in the advertising and public relations majors. Follow the arrows to find your way to the Fine Arts Center.

We give Deborah Wilkins a 500 thread count pillow. She needs a good night’s sleep given all the lawsuits the university keeps finding itself in.

To Head Coach Rick Stansbury, we give a Colin Kaepernick jersey. We know you’re a big fan of his.

To the Major Redz, we give a lifetime supply of season tickets to WKU football games so they can sit in the student section again.

Gov. Matt Bevin is the lucky recipient of a Donald Trump and Mike Pence stuffed animal. Even if the real ones won’t notice you, or follow you back on Twitter, we hope these little guys will give you the attention you’ve been gushing for.

To President-elect Donald Trump, we give you a framed photo of James Madison. Hopefully the grave look of the former president and architect of the Bill of Rights will have you thinking twice about unilaterally destroying the First Amendment. However, our hopes aren’t that high.

We’d like to give the WKU Police Department the 2003 album “In the Zone” by Britney Spears. The song “Toxic” is on there, and we think you’d like it.

To Cheyenne Mitchell and Michelle Jones, we give you both the justice you deserve. Hopefully those with authority can actually deliver on our gift.

To President Gary Ransdell, we gift you with a number two pencil and notebook for all the research we know you’ll be gearing up for during your sabbatical next year. The two should fit nicely next to the sunscreen and paycheck in your tote bag.

We give the Talisman some wind beneath their wings. They’re already soaring high and we’re excited to see them reach greater heights.

To our beloved Student Publications BSA Brenda, we give you all the cookies and baked goods you’ve provided us over the years. We wish you nothing but love.

We give the Confucius Institute the key to their building. We’re starting to worry that you’ve either lost it or it’s been stolen.

To the students who saw fit to write some of the more negative chalk comments across campus we give you some free art classes. You could use some work.

We give Gordon Johnson a new fishing rod for all those phishing emails you and the IT department have had to deal with.

Until next year, everyone.