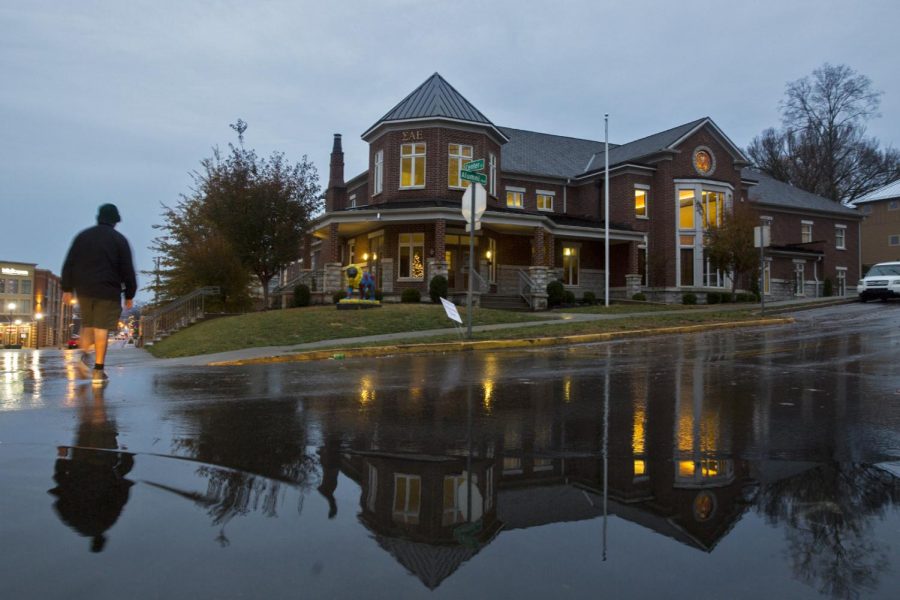 A Student walks past the intersection of Center street and Alumni avenue on Monday Nov. 28, 2016. Sigma Alpha Epsilon's KY Beta chapter has been suspended from participating from student activity for one year, over alcohol violations.

A WKU fraternity has been suspended from being officially recognized and participating in university activities by the University Disciplinary Committee, according to officials in Student Activities.

Director of Student Activities Charley Pride said the KY Beta Chapter of Sigma Alpha Epsilon was brought before the committee’s consideration after receiving what he refers to as their third strike for having alcohol in their fraternity house.

Pride received the official documentation of SAE’s suspension from the disciplinary committee Monday afternoon. He said this is the first time an organization has been suspended for alcohol since the policy was put in place.

“This was brought to the committee after an investigation into an incident showed there was alcohol present,” Pride said.

The fraternity will have a brief period to appeal the decision to Brian Kuster, vice president for student affairs, over its suspension. Kuster was reached for comment, but he did not respond in time for publication.

The Herald previously reported SAE was under investigation by Student Activities in September after an incident involving a member was reported to the Bowling Green Police Department.

KY Beta Chapter was founded at WKU in 1965 and was one of the original social organization’s on campus. It is also the fraternity of President Gary Ransdell.

In their motto “The True Gentleman,” SAE’s pledge to be “the man whose conduct proceeds from good will and an acute sense of propriety, and whose self-control is equal to all emergencies.”

The committee which decided on the suspension, made up of six faculty, five staff and two students appointed by the university president, is technically a part of the Office of Student Conduct directed by Michael Crowe.

Crowe was contacted by the Herald, but did not respond at time of publication.