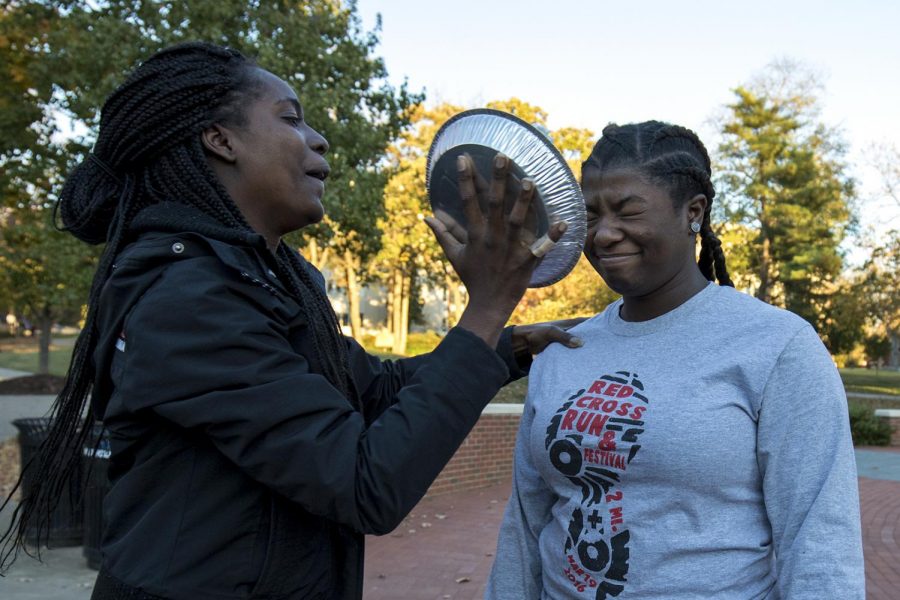 Itunu Francis, senior from Nigeria, takes a pie to the face from Louisville junior Sharon Brooks during Pie Face Day on Thursday, Nov. 10, at Centennial Mall. The event was hosted by Alpha Kappa Psi to raise money for their fraternity. Evan Boggs/HERALD

Whipped cream and pie crust plastered faces were in Centennial Mall last Thursday afternoon for Alpha Kappa Psi’s first ever “Pie Face Day” fundraiser. Members of the business fraternity volunteered to be “pied” in the face by passersby who were willing to donate a dollar to the fundraiser.

“It’s weird, but stress just left my body,” Grayson junior Dana Biechele said after smashing a pie into the face of Alpha Kappa Psi member Sharon Brooks. “This has been an awful day, and that was probably the best part.”

Brooks, a junior from Louisville, said she and her fraternity brothers came up with the idea for a pie throw fundraiser at one of their meetings.

“We were thinking something that would be fun and hopefully attract people,” Brooks said.

Throughout the semester, the fraternity hosts different events which include a business week to offer resources and encourage student success. Students of all majors and grade levels are welcome to join, Brooks said.

“We’re basically professional development,” Brooks said. One of the focuses is training for interviews, resumes and how to present yourself to the business world, she explained.

“Without the community, we wouldn’t exist,” Gaines said. Some of Alpha Kappa Psi’s service projects include working in food kitchens and with Golden Arrow, an outreach ministry in Louisville.

Alpha Kappa Psi senior Itunu Francis of Nigeria was the first to get a face full of whipped cream at Pie Face Day.

“My face smells like dairy,” Francis said as she rubbed whipped cream off her face and out of her hair. “But we’re making money.”

“We’re trying to get stuff done around campus, and we need money for it,” Louisville junior Taylor Sanders said. “We’re just trying something fun, something new that people would like to do.”

“Come on, pie me,” Sanders called out to students walking past Centennial Mall, grabbing the attention of Whitehouse, Tennessee freshman Danny Zeidan.

“There’s no throwing, I just put it in his face? Yeah, that sounds fun,” Zeidan said before paying a dollar to smear Sanders’ face with whipped cream.

“It was kind of fun, I guess,” Zeidan said. “Just something to do. Yeah, I guess it made my day better. I think it is a good idea. Only a dollar to put a pie in someone’s face. It’s the deal of the century.”

Francis said being a part of the fraternity has given her a good opportunity to network in the business world at WKU and at other university campuses. The group participates in various conferences and conventions, which is part of what the money from Pie Face Day will go toward.

“I like the brotherhood part of it,” Francis said. “We’re all different and have different personalities, but we can still come together no matter our differences. So that’s the best part.”

Gaines said he enjoys the brotherhood he found with Alpha Kappa Psi.

“We come together,” Gaines said. “We have fun; we enjoy ourselves. We have each other’s back. And we love each other.”