UPDATE: Ransdell addresses campus after five arrests made at student protest outside PFT 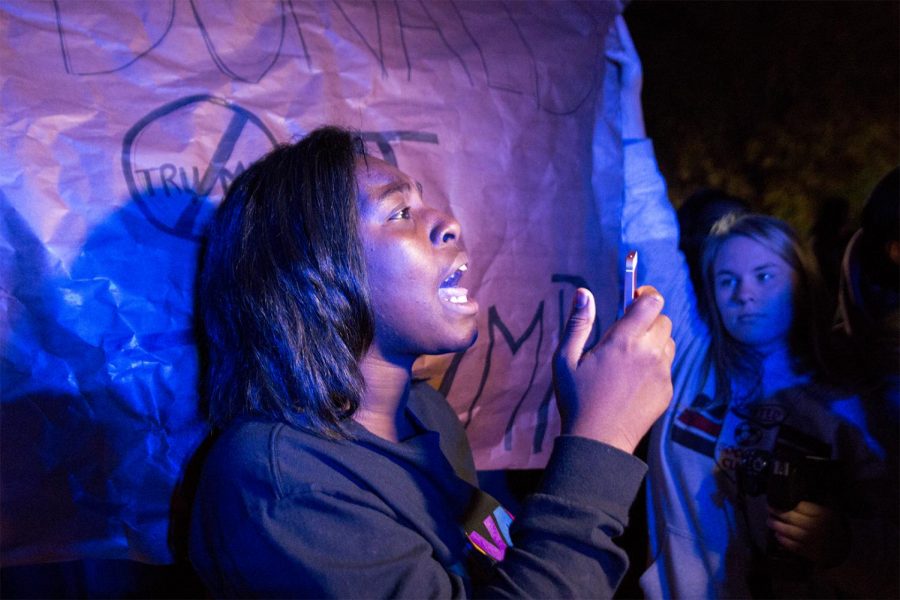 A protestor yells at Donald Trump supporters during an anti-Trump protest Wednesday, Nov. 9, 2016, by Pearce-Ford Tower. Multiple fights broke out between protesters and counter-protesters resulting in the Warren County Sheriff's officers coming to the scene to assist the WKU police.

UPDATE (Thursday, Nov. 10, 12:37 p.m.): In a statement sent to all faculty, staff and students, President Gary Ransdell encouraged the university community to support each other.

“Free speech is good, but let’s encourage all among us to be civil, thoughtful, and respectful of everyone in our campus family,” Ransdell wrote.

Ransdell implored students to treat each other as they wish to be treated, but said that tolerance alone was not enough.

“We need to embrace our differences, especially for those who might feel threatened,” Ransdell wrote. “Our African-American students and our international students, particularly our Muslim students, and those in our LGBTQ family may be feeling a sense of uncertainty.  We love them all and treasure what they bring to this richly diverse family.”

The Warren County Sheriff’s Office (WSCO) arrested five people for failure to disperse and disorderly conduct during a student protest outside of Pearce Ford Tower on Wednesday night, according to a media release from WSCO.

WKU has also released a statement confirming the arrests.

The protest began following four students holding signs outside of PFT in regards to the election of Donald Trump as president.

As the event grew and intensified, people began to burn Trump banners, play music, stand on walls and yell chants. The large crowd drew the attention of campus police, who were alerted of the event beforehand.

The Warren County Sheriff Department arrived on scene and tried to disperse the crowd with loud sirens.

WKU student Marianna Baker, 18, was one of the protesters arrested for disorderly conduct and failure to disperse. She said she was asked by officers if she would like to be arrested and when she answered no, she was handcuffed and led away.

She said she felt the protest was necessary for people to express their feelings about the election.

Students who gathered around the courtyard of PFT were expressing support and opposition for the new president elect.

“It’s not civil disobedience, just opposition,” junior Michaela Ryan, one of the early protesters, said. Ryan heard that people off campus were starting a protest and became involved by sharing the information on Facebook.

Protesters like Ryan were upset by some of Trump’s comments during the election.

“While he is our president, the things he says and does isn’t how I want other countries to see us,” Ryan said.

One of the groups that initiated the protest was SOKY Riot Grrrls. Lauren Wetenkamp, a 2014 WKU alumna who is a member of the group, said the protest had a purpose beyond showing opposition,

“We are creating a safe space for people who would be targeted by a Trump presidency,” Wetenkamp said.

The protest primarily gained attention after a fire alarm went off in Douglas Keen Hall, which forced several students out of the building. Trump supporters quickly noticed the protesters and began to yell back.

“It’s hypocritical. They are saying ‘love trumps hate,’ but they are spouting hate,” sophomore Morgan Robinson said. Robinson was one of many students that got involved in the protest.

Students like freshman Zhaneé Masden, are worried that the conflict seen in the protest is a prediction of the next four years.

The Herald will update this story as information becomes available.