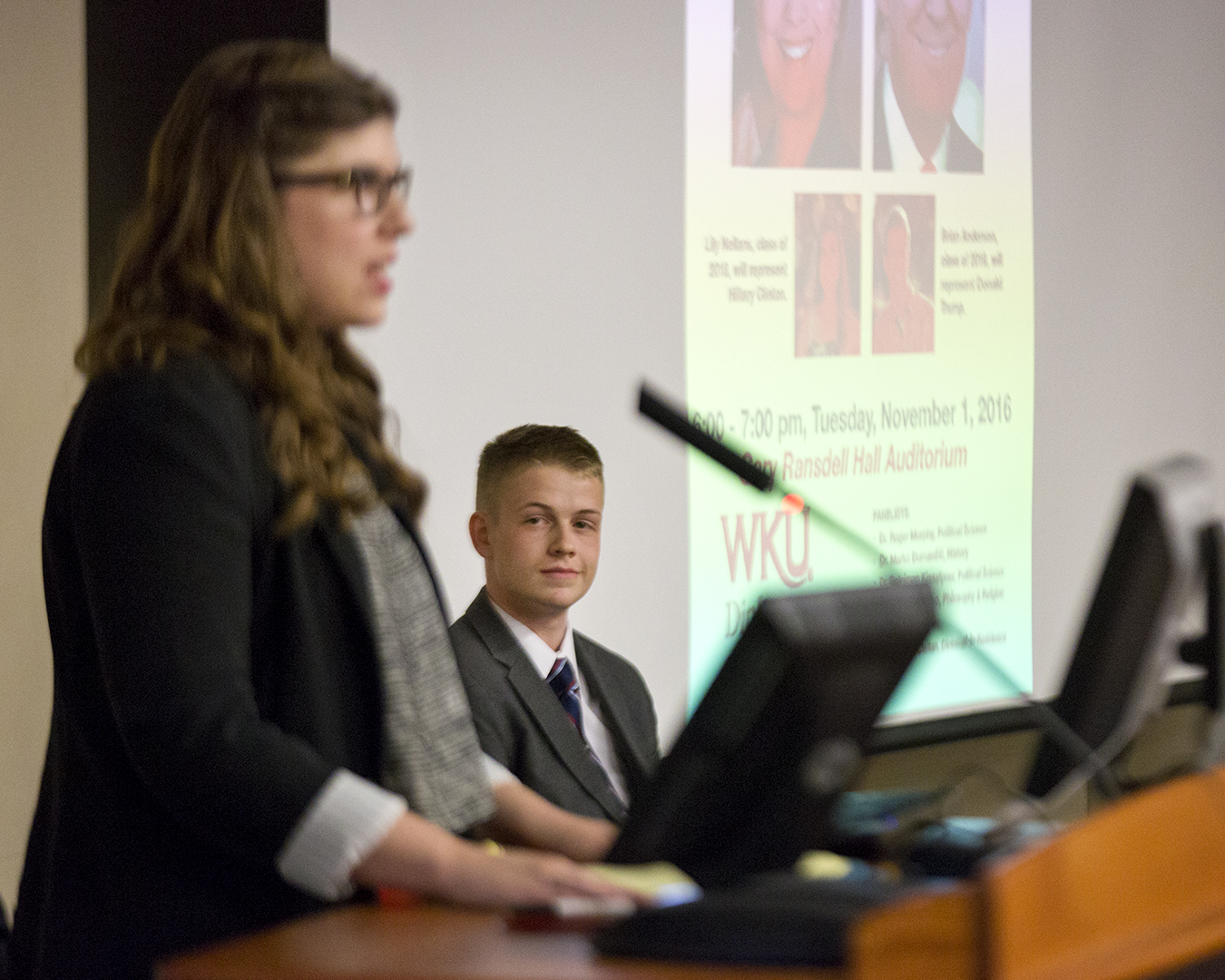 Students from the WKU Forensics team participated in a surrogate debate of Hillary Clinton and Donald Trump’s foreign policy stances on Tuesday.

“They will represent the candidate’s positions as surrogate and not pose as the candidates themselves,” Michael McClellan, diplomat-in-residence and moderator of the surrogate debate, said at the beginning of the debate. “They will not imitate the candidates … but will instead focus purely on their foreign policy positions in response to the questions posed by our distinguished panel of experts.”

Panelists asked the representatives about U.S. relationships with other countries such as Russia and China, the U.S. fight against ISIS, the candidate’s views on NATO and moral obligations to other countries.

Bain-Selbo asked if the candidates believed the U.S. had a moral obligation to the rest of the world and asked why or why not.

Brian Anderson, who won the coin toss, began the debate.

“The campaign website of Donald Trump isn’t very specific on anything other than domestic moral values,” he said. “But the stated campaign positions in Donald Trump’s speeches is place America first.”

Brian Anderson said although Trump hasn’t clearly said what “place America first” means, many analysts have interpreted it to mean, “he will always prioritize American interests, particularly when it comes to isolationism.”

Nellans, answering the same question, said Clinton has worked “as someone protecting the moral responsibility and moral duty of the United States.”

Dumančić asked the representatives if Russia would be considered a top foreign policy threat to the candidates, and how the candidates planned to respond to Russia and Vladimir Putin.

“Secretary Clinton believes, as do I, that Russia is one of the most important foreign policy challenges facing the United States today,” Nellans said. “It would rank second on her list right below the threat posed by ISIS and the civil war in Syria, but the conflict with Russia is intricately linked to conflict in Syria and our fight against ISIS.”

Later, when asked a follow-up question about relations with Russia, Brian Anderson said Trump’s policy would likely be one that would prevent the U.S. and Russia from “butting heads all the time.”

Nellans and Brian Anderson said most of their preparation for the surrogate debate came from reviewing each candidate’s website, reading transcripts of debates and speeches on foreign policy and looking at analysis of those policies.

“I’m hoping that students got a clearer understanding of where each candidate stands and the contrast between them,” Nellans said after the debate.

Brian Anderson echoed the contrasts between the candidate’s two foreign policies, and the danger of isolation as outlined by Trump.

“The common trend for protectionism and the idea that we have to build ourselves before we build other people is a dangerous one, and people need to know that,” Brian Anderson said.

Elizabeth Wells, Paducah freshman, said she came to the debate for a class, but was glad she came.

“All of the back and forth and flip-flopping was kind of thrown out of it, unlike a normal presidential debate,” Wells said. “It was more straightforward.”

Andrea Anderson, Paducah freshman, came with Wells to the debate. Prior, she felt like she wasn’t as aware of the candidate’s foreign policies.

“I’ve heard probably more about Donald Trump in the past from others,” Andrea Anderson said. “I feel like now, I’m more educated on Hillary Clinton’s side.”