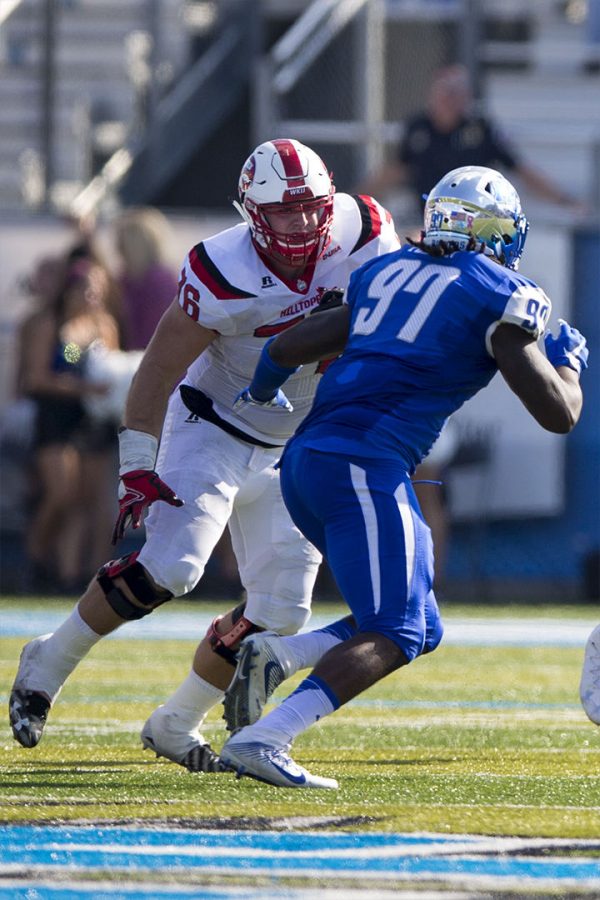 WKU’s matchup against the University of North Texas is going to be one that sees WKU’s explosive offense going up against one of the better pass defenses they’ll see all year.

WKU’s high-octane passing game will have to be on its game, and the front seven will have to continue to succeed against the run. Here are some keys to the game.

That will give Fine the potential to have a big game, making for a good matchup between the two. But regardless of WKU’s defense problems, White has better weapons around him.

WKU has a massive advantage in the receiver matchup that they could exploit. The Hilltoppers have the No. 2 and No. 5 ranked receivers in C-USA in receiving yards in Taywan Taylor and Nicholas Norris.

Taylor and Norris have combined for 2,108 receiving yards. North Texas’ top two receivers, Thaddeous Thompson and Terian Goree, have 736 yards combined, which is less than both Norris and Taylor individually.

UNT’s entire receiving core has just 8 touchdowns combined this season, where as Norris and Taylor each have 10 individually.

The Mean Green have allowed just 1,875 passing yards this year, and they’re tied for 22nd in the country in interceptions with 11.

That ballhawking effort is led by UNT defensive back Kishawn McClain, who ranks second in C-USA in interceptions with three.

White will get one of his toughest tests in the passing game this week when trying to connect with Taylor, Norris and the rest of his receiving options.

While WKU’s secondary isn’t as strong as UNT’s, their front seven certainly are.

UNT has allowed 1,838 rushing yards this year, and 4.7 yards per carry, which ranks them 30th in the nation for most rushing yards allowed.

WKU, on the other hand, is ranked 24th in the nation in fewest rushing yards allowed, as they’ve averaged 1,081, and an average of just 3.2 yards per carry.

This advantage will not only help the defense, but it also helps redshirt senior running back Anthony “Ace” Wales, who has been one of the best running backs in the conference.

The rushing attack is probably the fairest battle between these two teams. Wales has been one of the best running backs in C-USA, totaling 936 yards and 17 touchdowns, which ranks first in the conference.

However, UNT’s Jeffrey Wilson has done nearly as well as Wales.

WKU either holds a major advantage or is mismatched in just about every other aspect of the game, but the run game is a pretty equal battle going into the game.