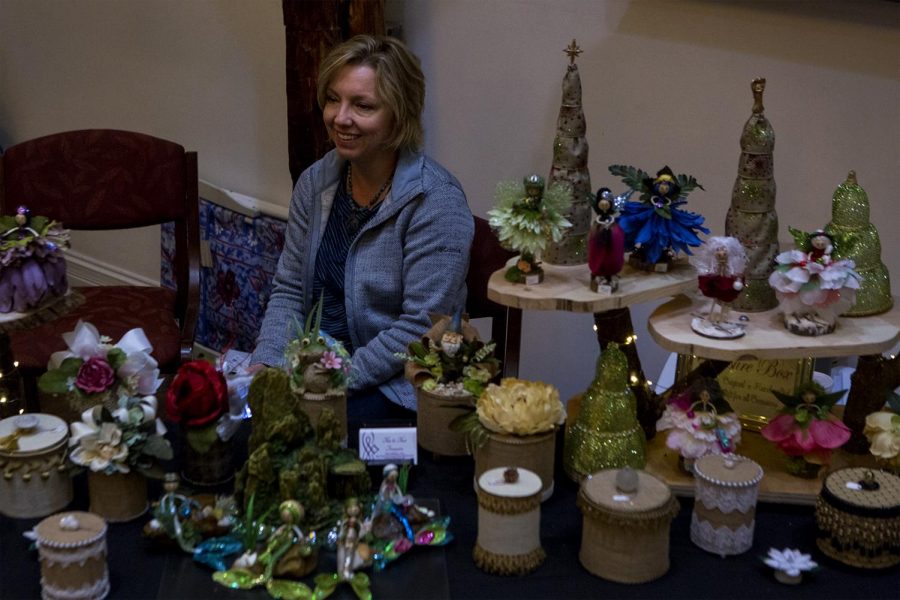 The Political Science Craft Show welcomed local artists and crafters to show off and sell their work at the Faculty House for the ninth year in a row Friday.

German instructor Tim Straubel had a table at the show, displaying his jam. Apart from the growing process, it takes nearly two months to have the jam ready to sell, Straubel said. He said his colleagues in the Modern Languages Department encouraged him to sell his preserves. He didn’t want to keep the money, so he decided to donate 100 percent of his earnings to the Humane Society.

“Since I can’t adopt all of the dogs and cats, this is a way to help them all have a home around Christmas time,” Straubel said.

His goal for this year alone is to donate over $4,000 to the Humane Society. He has already donated a total just shy of $8,000 with earnings from previous years.

Susan Faller, Bowling Green, began sewing when she was a young child and still continues to make and sell her sewing projects today. It can take anywhere from 24 hours to make a simple cloth to an entire year for a project like a tablecloth.

“Time and patience, a lot of patience, and the desire to do it is what makes me continue to do it,” Faller said.

Bowling Green resident Susan James was at the craft show selling homemade jewelry. She donates bracelets to the American Cancer Society because she previously had breast cancer herself. Some of her profit also goes to help her church.

“The church will give mothers who are under-resourced a gift, and sometimes that is the only gift they receive all year,” James explained. Some of her profits also go toward funding mission trips to Honduras.

Crystal Bowling, student personnel office coordinator of WKU’s Library Technical Services was behind another table, selling scented soaps from natural ingredients including essential oils, Epsom salts and dried rosemary. She said she learned how to make the products through Pinterest, a social media website. Bowling said the hobby started out as just making Christmas gifts for people.

“All of these are handmade with love, beer and mild swearing, which I’m sure Western loves being affiliated with,” Bowling joked. “I also made little white squirrels; I hope WKU won’t sue me for those.”

For Donna Bellinger of Bowling Green, the motivation to sell her craft came from retirement.

“I can’t stand not to be busy,” Bellinger said. “I want to have something going on all of the time.”

She sells fairies and mermaids made of silk flowers and charms, each one uniquely dressed.

“I enjoy making my cards and coming back to campus to see everybody that I don’t get to see every day, because I’m retired now,” Skipworth said.

Eaton decided to start selling her craft when it simply became too expensive to buy brand-name jewelry. She began selling her work this August.

Michele Miller and Larry Casey decided to combine his talent to create wood items with her talent of wood burning to create decorative items such as wooden snowmen and Christmas themed logs.

“We mainly do it for the extra money, but we enjoy coming to craft fairs,” Miller explained. “People really appreciate looking at them, even if they don’t buy anything.”