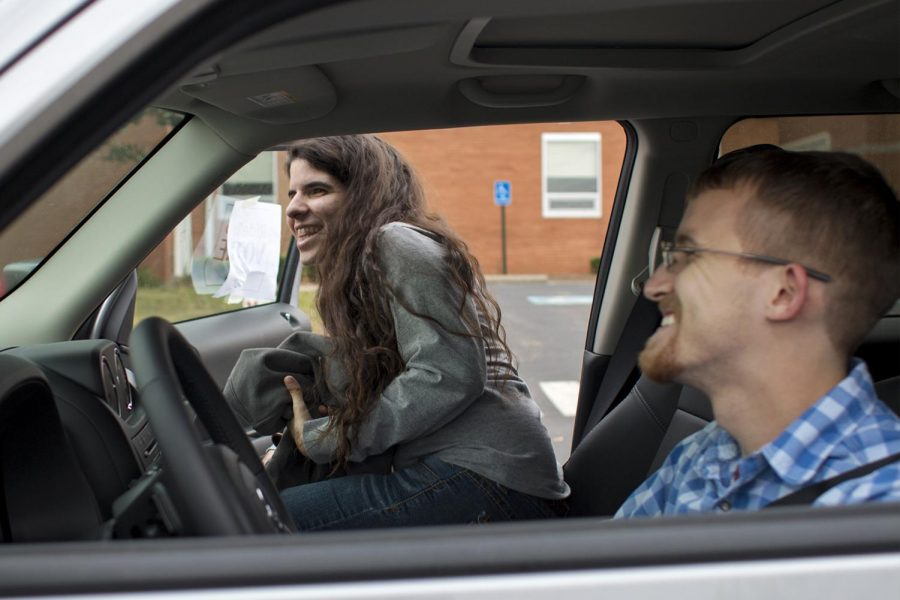 Elizabethtown junior Remington Grenier gets into Olive Hill junior Ty Knipp's car after voting on Tuesday, Nov. 8 at W.R. McNeill Elementary. Knipp volunteered to drive students for Ride To Vote, a free shuttle service for students to their polling place.

Knipp said he heard about the program from his sister, Alexandria Knipp, the program coordinator, and volunteered to drive. He was stationed in Centennial Mall with several other volunteers, asking students if they needed rides to the polls.

“We haven’t seen as many people as we thought we would,” Ty Knipp said. “But, it’s just the first year.”

Elizabethtown junior Remington Grenier was driven by Knipp to the W.R. McNiell Elementary school to vote.

“I had no idea it was so close,” Grenier said of the school when they pulled into the parking lot. “I guess I could have walked.”

Knipp waited in the parking lot while Grenier voted, then drove her back to campus. While discussion of politics and the election was strictly prohibited by the Ride to Vote regulations, the two did discuss the importance of voting.

“Most people totally would vote, but they’re registered at home,” Knipp said on the drive over.

“I thought more people would utilize this service,” Grenier said of Ride to Vote. “Every vote counts.”

Bowling Green resident hopes vote will have an impact

Resident hopes for peace after election

Woman says she has learned to appreciate voting