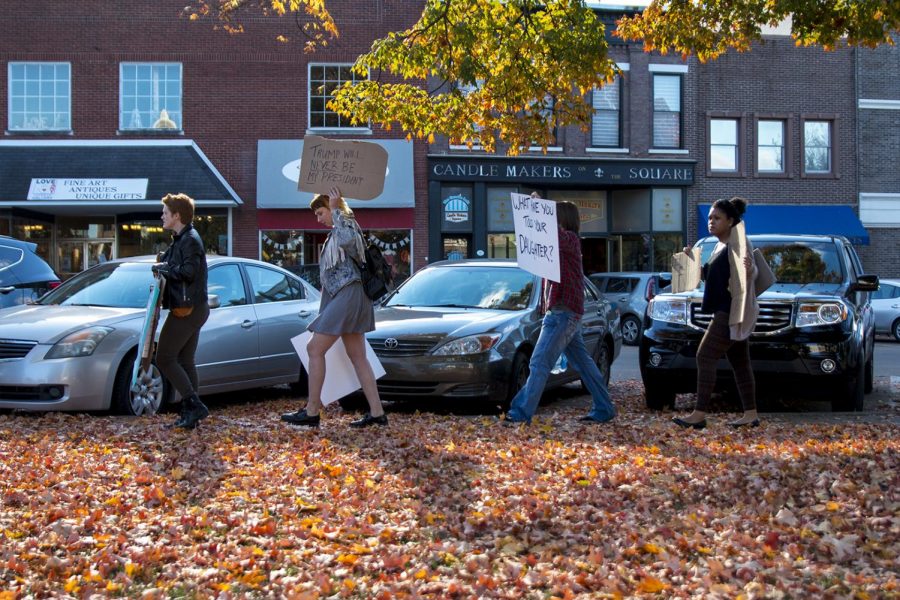 A group of protestors walk through Fountain Square Park in downtown Bowling Green holding up anti-Trump signs to passing cars and people in the area on Wednesday Nov. 9, 2016. "...I've been told over and over that I need to love this country because I'm from here, but it's hard to when the country doesn't love you back," Bowling Green senior Briana Phillips said. Kathryn Ziesig/HERALD

A small group of local Democratic protesters took to the streets of Bowling Green on Wednesday afternoon to protest the presidential election of Donald Trump.

“A lot of us were devastated last night with the results,” senior Briana Phillips said. “We wanted to come out here and stand in solidarity with those who may feel like there’s no hope after this.”

The group started its protest at the Warren County Justice Center and marched to Fountain Square Park, where the group remained for the rest of the protest.

Charles Martinez, a 20-year-old local artist, along with the other protestors held signs displaying their feelings about Trump and personal concerns.

“As a queer male, a queer American citizen, I have to just really stand up and represent our people and everyone regardless of your sexual orientation, nationality, whatever, we’re all Americans,” Martinez said.

The group was approached by a couple of Trump supporters who wanted to talk to the group and voice their own opinions. Donna Crawford, a Bowling Green resident and Trump supporter, was one of the citizens to personally approach the group.

“I don’t know where this country is going and it’s going to be interesting to see,” Crawford said. “Hillary just really scared me, but I know they’re saying they’re really scared of Trump.”

Crawford said she decided to cast her vote based on which candidate better fit her own personal beliefs and hopes that both parties can come together, tolerate the other’s opinions and find a civil common ground.

“I hope these people know that they’re loved and somebody actually cares what they’re going through, and I know they didn’t believe that,” Crawford said after talking with the protestors.