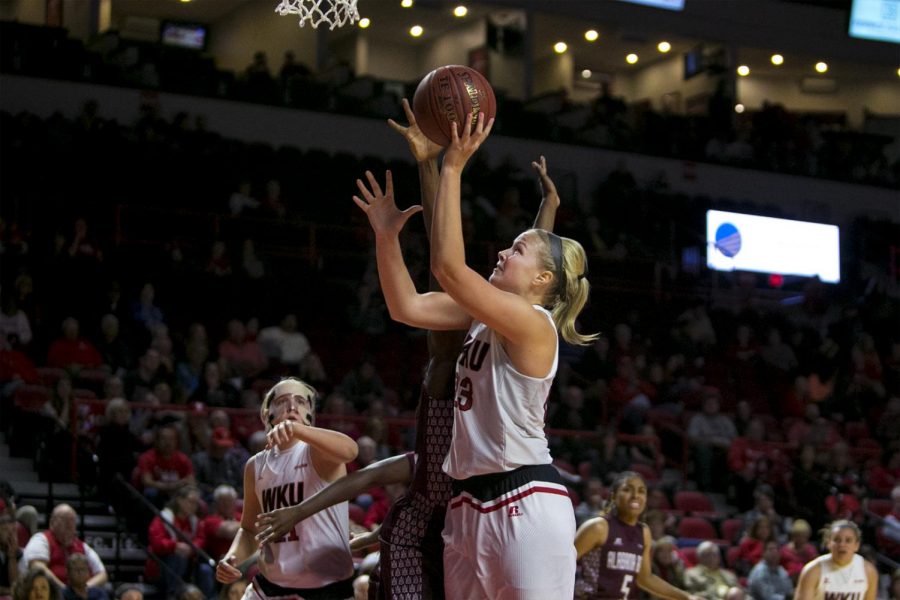 Junior Forward Ivy Brown (23) takes a shot during the first half of the Lady Toppers 96-32 win over Alabama A&M on Friday Nov. 11, 2016 at E.A. Diddle Arena. Kathryn Ziesig/HERALD

The matchup also served as a homecoming for Alabama A&M Head Coach Margaret Richards, who made her head coaching debut after serving as an assistant under WKU Head Coach Michelle Clark-Heard from 2012-15.

“It was a good opportunity to be able to coach against someone who brought so much to this program as an assistant,” Clark-Heard said. “A credit to Margaret and her team. Her team plays hard and they will continue to get better.”

Thanks to two early three-pointers by Noble and sophomore guard Kayla Smith, the Lady Tops jumped out to an 8-0 lead just two minutes into the game.

The Lady Bulldogs and Lady Tops continued to trade baskets until redshirt senior Micah Jones found Tashia Brown just before the buzzer to give the Lady Tops a 20-10 lead at the end of the 1st quarter.

Despite finishing the game scoreless, Jones tallied a team-high 12 assists to break double figures in one statistical category.

“I was really proud of how our veterans came out,” Clark-Heard said about the fast start. “Defensively we came out with a lot of intensity and did some good things and everything started rolling from there. I was especially proud of Micah sharing the ball, getting everyone involved and getting 12 assists.”

WKU began to pour it on in the second quarter. After the Lady Tops scored the first seven points of the quarter, Alabama A&M’s Josta Totten was able to connect from three point range to cut the lead to 14 points.

However, those would be the only points for the Lady Bulldogs the rest of the period.

Shortly after the Lady Bulldogs’ lone bucket, Jones found junior forward Ivy Brown for an easy three-pointer to push the lead back to 17.

Noble then stole a Lady Bulldog pass and found Tashia Brown for an easy bucket which highlighted a 14-0 run to give the Lady Tops a 41-13 halftime lead.

Noble’s steal was just 1 out of the 20 steals the Lady Tops recorded all night.

“I think we were really clicking offensively and defensively,” Ivy Brown said after the game. “Everyone was making the extra pass and finding the open man. We were very aggressive on defense. We had 20 steals and those carried over to the offensive side.”

“You don’t want to just play five people. That’s something we emphasize in practice,” Ivy Brown said. “The bench stepped up really big tonight. They were a little shy at first but once they got comfortable they hit some big shots.”

The Lady Tops host the University of Texas-Arlington (1-0) tomorrow night at 5:30 p.m. Last year, the Lady Tops defeated the Lady Mavericks 73-64 in Arlington.

“UT-Arlington has a big player who is really good,” Clark-Heard said.

“They’ll press and do a lot of different things. They’ll get to the rim and mix things up. It’ll be a good challenge for us.”