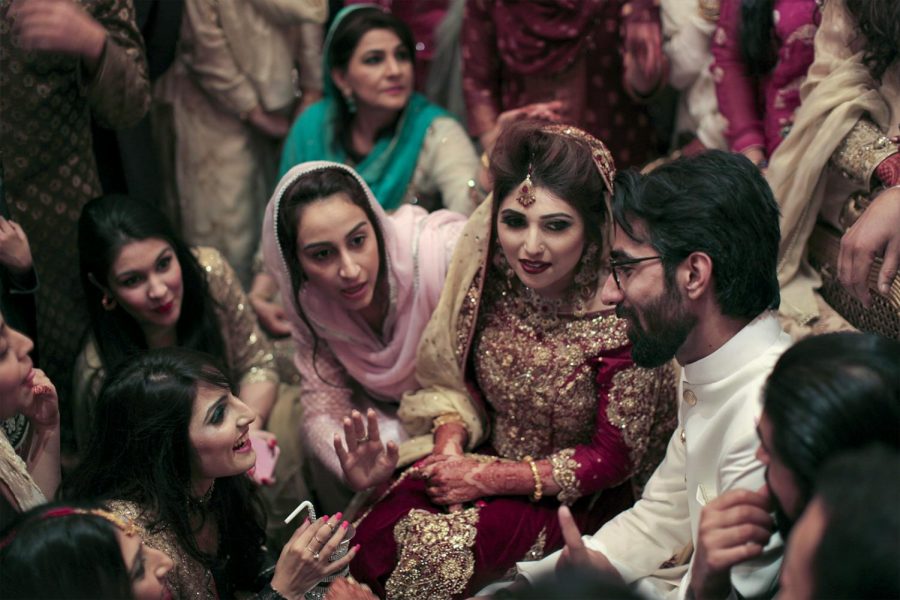 Newlyweds, Ayaz and Ayesha Sadal (center) are harrased for money by their friends and family for drinking milk from a silver chalice during their Baraat ceremony in Lahore, Pakistan. Baraat is a portion of the wedding event where the groom takes his bride home to her new family. In Pakistani tradition the bride and groom are pestered by their friends and family to fork over money in exchange for acceptance by the 'in-laws'. Alyse Young/HERALD

On Oct. 11, Ayaz Sadal stepped out of Allama Iqbal International Airport and into the familiar haze of Lahore, Pakistan. The short drive along the runway’s edge was all that could separate him from his family, whom he had not seen in years.

Ayaz is the middle child in his family with an older brother, Zia Sadal, and younger sister, Sadaf Sadal.

Ayaz had left his home in Pakistan to study in America, where he would receive his master’s degree in Public Administration from WKU. Seeking citizenship, Ayaz remained in the United States, living and working in Chicago.

While home on a break from classes in 2012, Ayaz was introduced to his now wife, Ayesha Sadal.

“If I fall in love with somebody at this point of time, it’s going to be her,” Ayaz said, recounting his thoughts of their first meeting. “It took me about a year to propose to her.”

Ayaz did not originally plan to marry this year.

“You never know where you end up,” Ayaz said, recalling a conversation with his father encouraging him to go ahead with the wedding plans knowing that it may be the last time his family is together under one roof.

“I see my parents getting old, I see my brother, sister getting married, so everything is happening too fast at this time for me,” Ayaz said, explaining his decision to agree with his family’s plan for a triple wedding in mid-November of this year.

The bond Ayaz shares with his siblings is deep, despite their separation across continents.

“She used to hold my finger in her hand and I can still see that whole memory of her,” Ayaz said of his sister, Sadaf, who planned to move with her husband to Chicago shortly after the wedding. “Now when I see her being all grown up, getting married, that just, you know, tells me that I miss the 25, 26 years growing up with her,”

Zia Sadal planned to move to Germany with his wife Farheen after the wedding.

Both his brother, Zia, and sister, Sadaf, had marriages arranged by their parents, a common practice in Pakistani society.

Ayaz plans to return to Bowling Green in December and is still uncertain about whether his wife will be granted approval for her visa.

“I don’t know what’s gonna happen in the future,” Ayaz said. “People tend to think that life in the US, is way much more better, than anywhere else — that’s not true. It is completely on yourself, how you take it,” Ayaz said, addressing concerns that he may not be ready to take on married life in America.

“We’re going to step into this country together,” Ayaz said. Ayaz holds out hope that his prior experience abroad will help him to be a good guide for his wife.

“She has never left Pakistan before; the U.S. is a far, far thing for her,” Ayaz said.

Ayaz described his marriage as a new start.