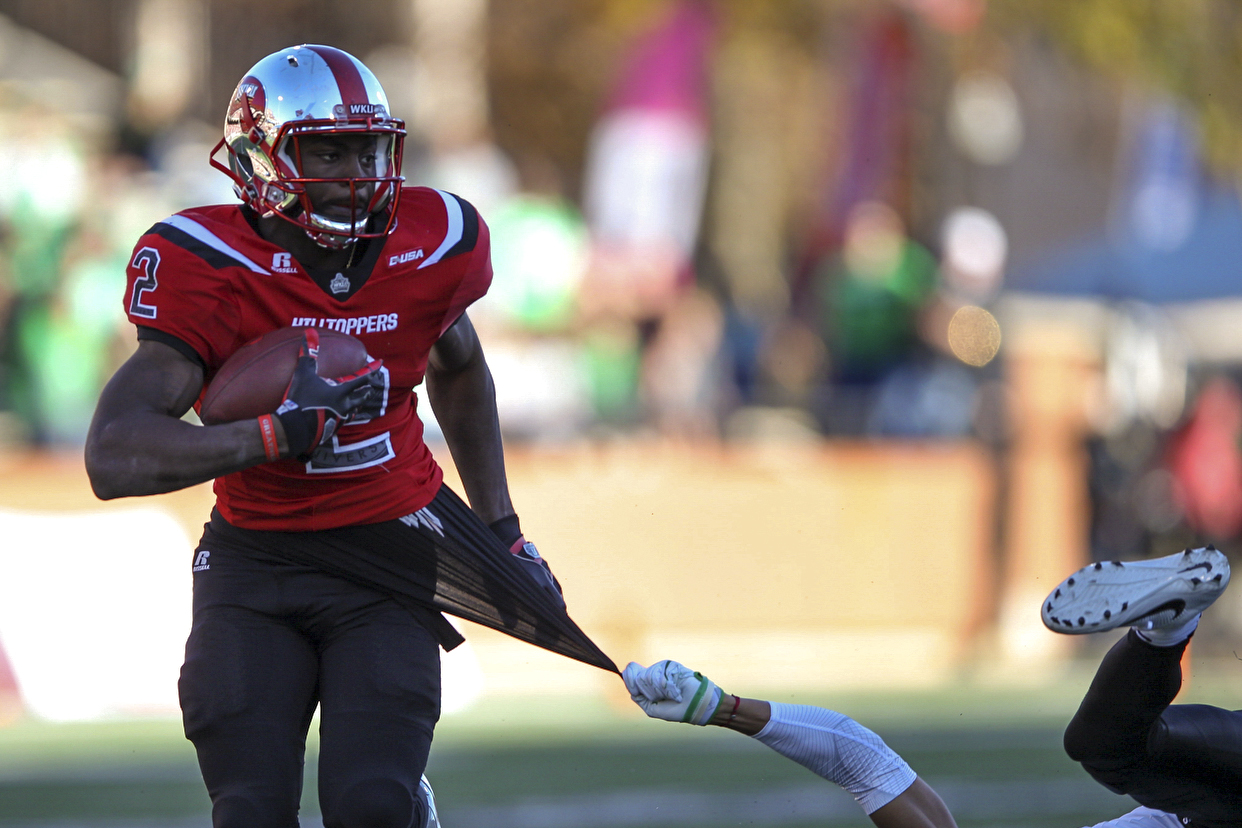 Senior wide receiver Taiwan Taylor (2) carries the ball down field while North Texas defensive back Nate Brooks attempts to stop him during the first half of the WKU football game against North Texas on Nov. 12, 2016 at L.T. Smith Field.

Last year, fans and coaches had to say goodbye to a senior class that led the most successful season in WKU football history since becoming a Division 1 program. Today’s home finale against North Texas will allow fans to watch another accomplished senior class play for the last time.

Defensive coordinator Nick Holt came into the WKU program at the same time as most of the 24 seniors that will be honored before the game. He’s seen their production rise alongside the rapid growth of the program.

“A lot of these guys—especially some of those offensive lineman that have been here for four or five years—have done just a great job,” Holt said. “They’ve won a lot of games and they know how to win. They’ve been battle-tested and the kids we have on defense have been through the grind too. We have very experienced seniors with great leadership. Those guys are great kids and great leaders and we need to get a win for them.”

One more win for the class of 2016 would boost their win total to 36 games— just three shy of claiming the most wins by a senior class since the class of 2004 won 38 games.

With a chance to win four more games this season, including a conference championship and a bowl game, this senior class would accomplish 39 wins across two different eras of WKU football.

After a quick, one-year stint under Bobby Petrino in 2013, Jeff Brohm took over the program and helped mold the current seniors into some of WKU’s most decorated players.

Perhaps the most consistent unit over the past two seasons for the Hilltoppers has been the offensive line, which is led by three seniors. Starters Max Halpin, Forrest Lamp and Darrell Williams are all redshirt seniors who began with the program before Petrino arrived. All three experienced the transition from being used to finishing in the middle of the pack to expecting to be at the top.

Louisville transfer and redshirt senior offensive lineman Joe Manley has been watching the program grow ever since he can remember. Manley, a Bowling Green native, has roots in the program. His father played at WKU in the 80’s.

“Back when I was growing up, I watched the 1AA National Championship game in a hotel out in Western Kentucky,” Manley said. “I’ve watched everything that this program has done and I feel like there’s nothing but more success coming for the program in the future.”

Part of the future will depend on how the Hilltoppers can replace some of WKU’s all-time offensive leaders.

“They’re not only two outstanding players, but outstanding competitors,” Brohm said. “Both of them want the ball, they’re very productive when they’re in there and they make big plays…They set a great example for the younger receivers as far as when it comes game time, they’re ready to go. They’re two guys that will be very severely missed, but I hope they’ve set the tone and the example for the younger guys.”

Taylor said that all of the memories he’s made in his four years at WKU are too numerous to count.

“It’s so much,” Taylor said. “All of the accomplishments, like winning the first conference title ever, winning the first bowl game and being a part of that. It’s been some special accomplishments that I’ll never forget and it’s gonna be with me for a lifetime. I’m so proud and I’m glad I made the decision to come here. I want to see that continue to grow.”

The other top-ten player on offense is senior running back Anthony “Ace” Wales.

Wales is eighth all-time in WKU history in rushing yards with 2,657 and sixth in rushing touchdowns with 33.

“Ace has always been a competitor,” Brohm said. “For a while we had Leon Allen and he pretty much carried the load and Ace probably didn’t get as many opportunities as he would’ve liked. But because of it he kind of hung back in the wings, worked hard, went through the hard times and the struggles and became better because of it… He’s a guy that we have to have.”

Having three of the most productive players in school history makes a senior class stand out, but having two graduate transfers leading the defense makes it even more unique.

Louisville transfers Keith Brown and Nick Dawson-Brents have stepped into starting roles for Holt’s defense and have combined for 117 tackles on the year. Brown leads the team with 98 at the linebacker position.

Brown said that last year’s senior class had an influence on his decision to transfer to WKU.

“I talked to George Fant and I talked to Nick Holt,” Brown said. “Nick Holt was a big influence on me coming here. He told me how his dad coached and he kind of taught me the defense as well. He just brought me in like I was a brother.”

Despite his short time on the Hill, Brown said that this senior class is especially close and he feels like his time here has been longer.

“I feel like we bonded pretty fast,” he said. “I’m close with the guys. We all go out to eat and play cards and stuff together. Those are my brothers, man. We’re in it together.”