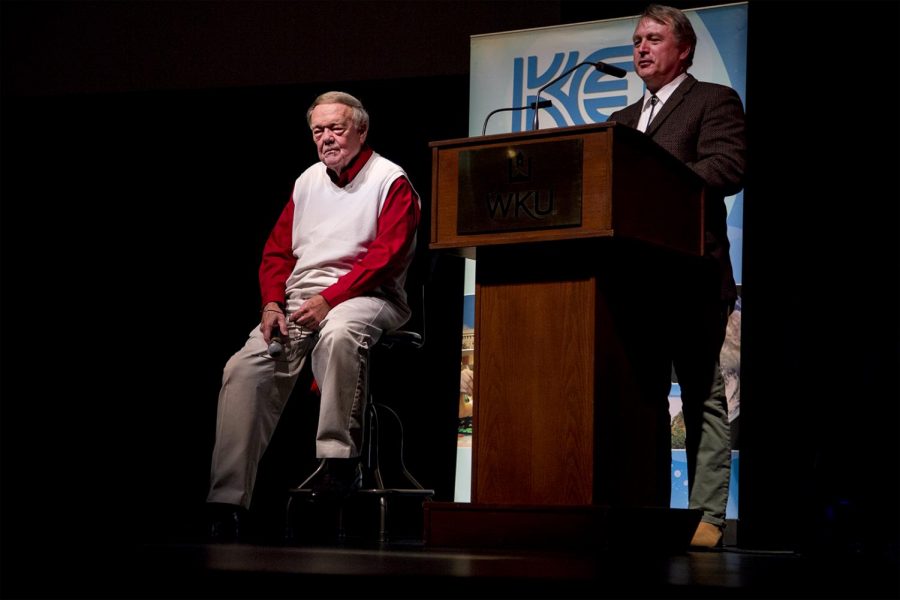 Don McGuire, 85, of Lexington sits on stage in Van Meter Hall after the viewing of the KET documentary "The Hilltoppers" on Monday, Oct. 10. McGuire is the only remaining member of the internationally famous quartet that was founded at WKU in the 1950's, then known as Western Kentucky State College. Originally from Hazard in eastern Kentucky, McGuire came to WKU to play basketball. While here, he became one of the founding members of "The Hilltoppers." "I am so happy I came to Western Kentucky," McGuire said. McGuire graduated from WKU in 1954.

Though it may be difficult to imagine now, in 1952 a barber shop quartet was practicing on the stage of Van Meter Auditorium.

The quartet was made up of Jimmy Sacca, Donald McGuire, Seymour Spiegelman and Billy Vaughn. They called their group The Hilltoppers. Many people have never heard of The Hilltoppers, but those who were alive when they played on the radio remember them well.

The Hilltoppers gained popularity after they gave their early recordings to a disc-jockey in Bowling Green, and ended up touring the world, performing on the Ed Sullivan Show as well as the Patti Page Show.

During the height of their popularity, The Hilltoppers played at The Chicago Theatre six times a day, McGuire said. The group would go on to perform at 144 shows in Las Vegas; their biggest show was in the Philippine Islands.

Tom Thurman, a KET director, set out to tell their story through a documentary called “The Hilltoppers.”

Thurman got the idea to make the film from KET Executive Director, Shae Hopkins, who grew up in the same neighborhood as McGuire.

The film took nine months to make and wrapped up this summer, Thurman said.

“My favorite part of filming was meeting the Sacca family and unearthing rare material that hadn’t been seen in a long time,” he said.

“The most difficult part was knowing they had television performances, but not being able to get a hold of them,” Thurman said. “I would’ve liked to have secured additional performances.”

Thurman said he hopes viewers who grew up during The Hilltoppers era will “find their youth again.”

The two sons of the singing group’s main singer, Jimmy Sacca, went to the film’s premiere at Van Meter Auditorium on Monday, Oct. 10.

“I know my dad would’ve loved [the film],” Tommy Sacca said. “It couldn’t have been any better.”

“I thought it was fantastic,” Jimmy Sacca Jr. said. “KET did a really good job.”

“I thought it was excellent,” McGuire, the sole living member of The Hilltoppers, said after watching the documentary.

During the premiere, McGuire spent a lot of time reflecting on his days as a Hilltopper.

“People had our song as ‘their song,’” he said. “We left a pretty good legacy.”

McGuire now lives in Lexington, but he says he’ll always truly be a Hilltopper.

At the premiere, someone asked McGuire if “he’s still got it,” to which McGuire replied, “I’ve always had it.”