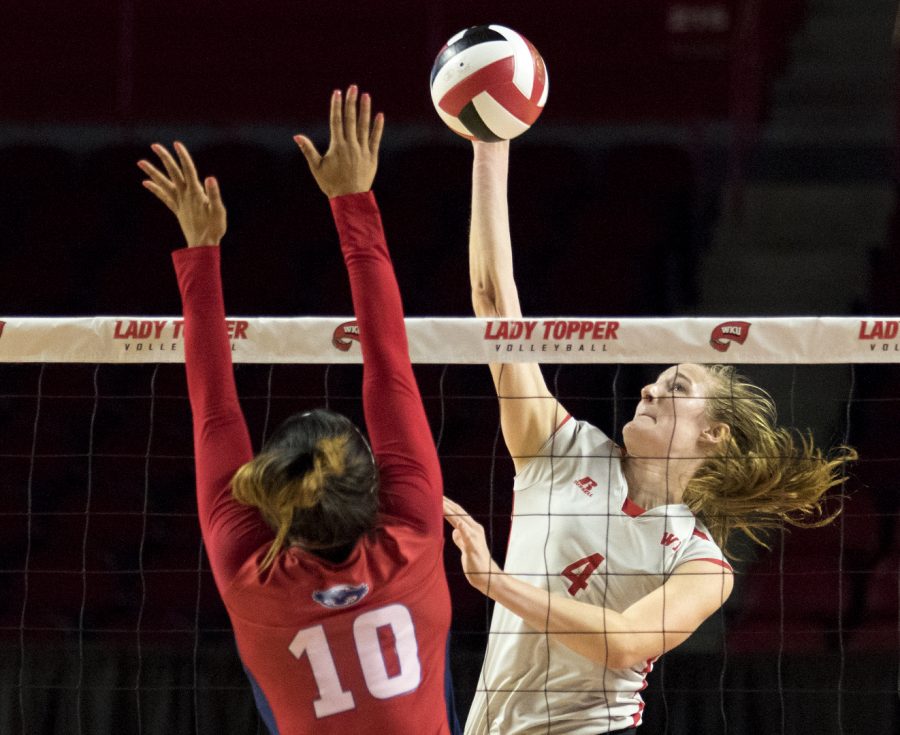 The 25th-ranked volleyball team is about halfway through its 2016 campaign and they are currently sitting at 17-2 on the season.

“I certainly didn’t think we’d be 17-2 at this point in the season,” Head Coach Travis Hudson said. “We have kind of really walked a pretty thin line for a while. I have just tried to stay focused on playing a little better every day, and hopefully we will continue to do that.”

This past Thursday the Lady Toppers went to Hattiesburg, Mississippi, to face off against the Golden Eagles of the University of Southern Mississippi (14-6).

WKU came back to Bowling Green with a win in its bag as the Lady Tops took down Southern Miss in four sets 3-1.

“We are doing better every day, and that’s what I’m trying to stay focused on,” Hudson said. “It’s a good win; Southern Miss is a really good team. These kids have been grinding. We have had a lot of ugly wins that we found a way to win and that’s a critical part of winning a championship.”

For the fifth time this season, All-American junior outside hitter Alyssa Cavanaugh put up a 20-kill performance as she led the WKU offensive attack with 21 kills.

“She [Cavanaugh] is still carrying a big load for us offensively,” Hudson said. “I still think us becoming the best version of who we can be is gonna have a lot to do with Taylor [Dellinger] and Sydney Engle. You know those are two kids that are incredibly capable offensively that just aren’t in a great rhythm right now and hopefully that happens, and when it does I think we are gonna be awfully good.”

“The thing I can tell you about both those kids [Dellinger and Engle] is they care a lot, and I have spent a lot of extra time with them technique wise and stuff like that and we just haven’t broken through yet,” Hudson said. “But it’s coming both those kids will have breakout moments, and when they do we are gonna be awfully hard to beat.”

Sophomore middle hitter Rachel Anderson threw down 15 kills for her sixth 15-kill match of the year. Sophomore outside hitter Taylor Dellinger and junior outside hitter Sydney Engle finished with nine and eight kills, respectively. As a team, WKU hit .261 at the net combining for 56 kills.

“It just makes us a different team offensively when she’s [Anderson] is playing well,” Hudson said. “I think she is one of the best middle hitters that’s ever laced them up here.”

Cavanaugh and Lucas were honored with weekly conference awards again this season. Alyssa was named C-USA offensive player of the week and Lucas the co-setter of the week.

After having a weekend off during the season, the Lady Tops are ready to get back on the hardwood. WKU takes on Lipscomb University (10-6) in Diddle Arena Tuesday, Oct. 11, at 7 p.m.

“It was nice, we had essentially a weekend off, and that’s unheard of during season,” Hudson said. “It was a really nice opportunity to just get away and kind of clear our minds, and hopefully we come back really good on Tuesday.”