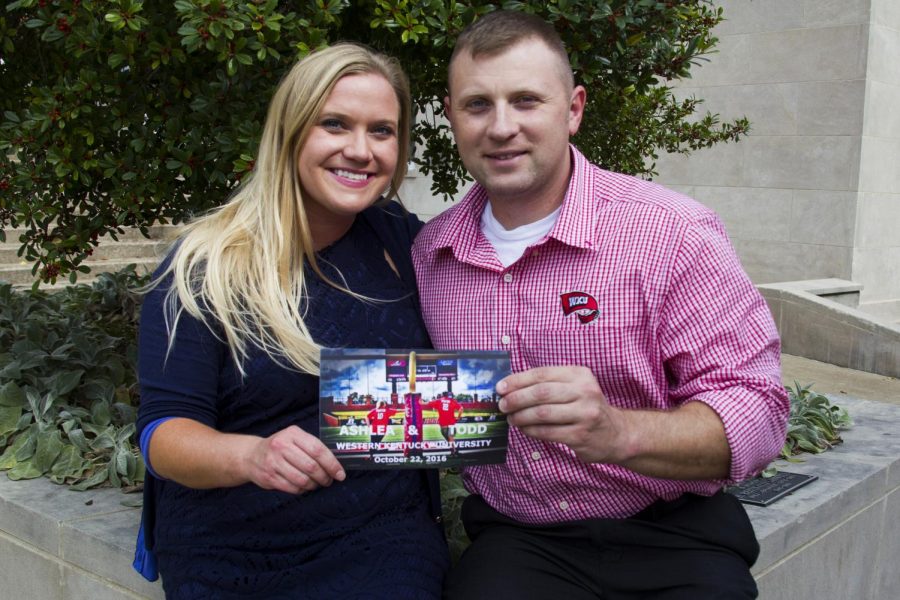 Todd Porter and Ashlea Shepherd hold a copy of their wedding invitation. Porter and Shepherd, both WKU alumni, will get married Saturday, Oct. 22, during Homecoming festivities. Megan Strasswegg/HERALD

Two WKU alumni plan to bring their love story in a full circle at their wedding this Saturday; the ceremony will be on the steps outside of Van Meter Auditorium, followed by a tailgate reception on South Lawn before the Homecoming football game.

Todd Porter and Ashlea Shepherd connected for the first time at the fountain on the square downtown after the 2014 Homecoming parade. Shepherd asked if he was going to the game tomorrow. Porter said he wasn’t sure.

Shepherd said Porter now tells her that once he found out she was going to the game, he decided he would, too. He texted her and offered her a ticket to sit with him, which she accepted.

“That was the first time we ever hung out and got to be around each other,” Shepherd said. “I think we realized we liked each other very quickly, and it just went from there. So that’s why we picked Homecoming day to get married.”

Almost two years later in July, Porter proposed to Shepherd at the fountain in Square Park, where they first talked with each other.

After the two got engaged, they considered a destination wedding or just getting married in Bowling Green without telling anyone and going straight to their honeymoon.

“I remember having a conversation with her,” Porter said. “Yeah, it would be cool to go off and do it where nobody else was a part of it, and then we don’t have to worry about the hassle of a typical wedding.”

However, Porter said he wanted Shepherd’s father to have the chance to walk her down the aisle and give her away.

“I feel like that’s something a dad should get to do,” Porter said. “Especially a dad who only has one daughter.”

So, the two began brainstorming possible venues for the big day.

“We started thinking about it,” Shepherd said. “Homecoming would be the most perfect thing, and we just decided that would be very serendipitous just to all come full circle and do it at Homecoming.”

This Saturday, the couple will have a ceremony at 2:30 p.m. on the steps outside Van Meter Auditorium. Guests will have red towels instead of rice or bubbles, and will follow the newlyweds in a parade to South Lawn after the ceremony for a tailgate reception.

“We don’t have any idea how many people to expect,” Shepherd said. “I think we’ve told just about anybody who’ll listen that they’re more than welcome, so we’ve prepared for a lot of people.”

Shepherd worked with WKU event coordinators to organize the ceremony and reception.

Shepherd described it as a flash mob wedding; the ceremony and reception would just be another part of this year’s Homecoming.

Both said their family and friends were all excited when they heard about the venue and plans for the ceremony.

No one reacted like they wouldn’t come just because it wasn’t going to be a traditional ceremony at the church, Porter said.

“I get a lot of, ‘that’s the coolest idea ever,’” Shepherd said. “I mean, my parents were there for the proposal; he did it right.”

Shepherd said the planning has gone relatively smoothly in collaborating with WKU and getting family and friends to come out.

“We’ve done everything ourselves for the most part, besides catering,” Shepherd said.

“It hasn’t been nearly as stressful as I’ve been making it out to be to him, I think,” she added, smiling at her fiancée.

Both Shepherd and Porter are self-proclaimed diehard WKU fans.

“I probably love tailgating more than I love football, and he loves football more than he loves tailgating,” Shepherd said. “So we’re going to get the best parts of it.”

Porter said he likes the history of WKU athletics and watching the football team’s progression in recent years.

“WKU is my number one team,” Porter said. “I don’t have love in my heart for anybody else.”

“He begrudges me for being loyal to UK,” Shepherd chimed in. She went to the University of Kentucky for graduate school before she came back to Bowling Green to practice family law. “When it comes to it, though, I pick WKU.”

Shepherd said she loves Homecoming and seeing the alumni come together back on campus. Porter, now a Bowling Green police officer and member of the National Guard, had his studies interrupted by deployment to Bosnia and later to Iraq before graduating, so he didn’t have traditional Homecoming experiences as a student.

“This will probably be my first Homecoming memory,” he said.

Shepherd said she thinks the wedding will be one of a kind.