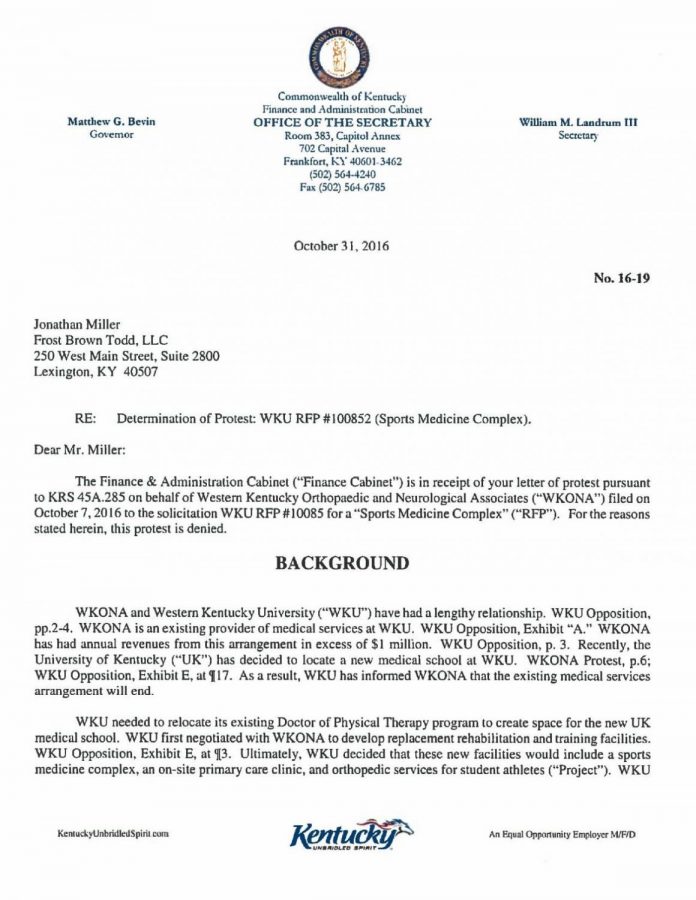 The supplemental protest to WKONA’s Oct. 7 protest of WKU’s bidding process for the sports medicine complex alleged the university admitted to attempting to break a federal anti-kickback statute.

In this third supplemental protest, WKONA is claiming WKU admitted to attempting to break federal laws by telling the health care provider in a response to their protest it could win the rights to health services on campus by simply agreeing to build the facility.

“This indecent proposal is a textbook violation of the federal Anti-Kickback Statute,” the protest filed on behalf of WKONA by Frost, Brown, Todd LLC states. “This well-known criminal statute prohibits giving anything of value, with the intention of inducing referrals of business, that is payable in whole or in part by any federal health care program. And it is no secret that WKU and the Medical Center intend to exchange exclusive operations of a healthcare clinic that derives significant income from Medicare and Medicaid patients for a $22 million facility.”

In an email from WKU General Counsel Deborah Wilkins Monday afternoon, she said WKU would not be making a statement about the protest at this time but did confirm the Finance and Administration Cabinet had reached a decision. She also said the university would be extending the deadline for bids by two weeks after the process had been suspended due to WKONA’s protests.

Four reasons for the protests denial were cited in the response by Secretary of the Finance and Administration Cabinet William Landrum III, including the grounds for protest being premature since no award connected to the RFP had been made and claiming WKONA’s arguments were theoretical in nature.

The statement said this decision of denial would be final and conclusive.