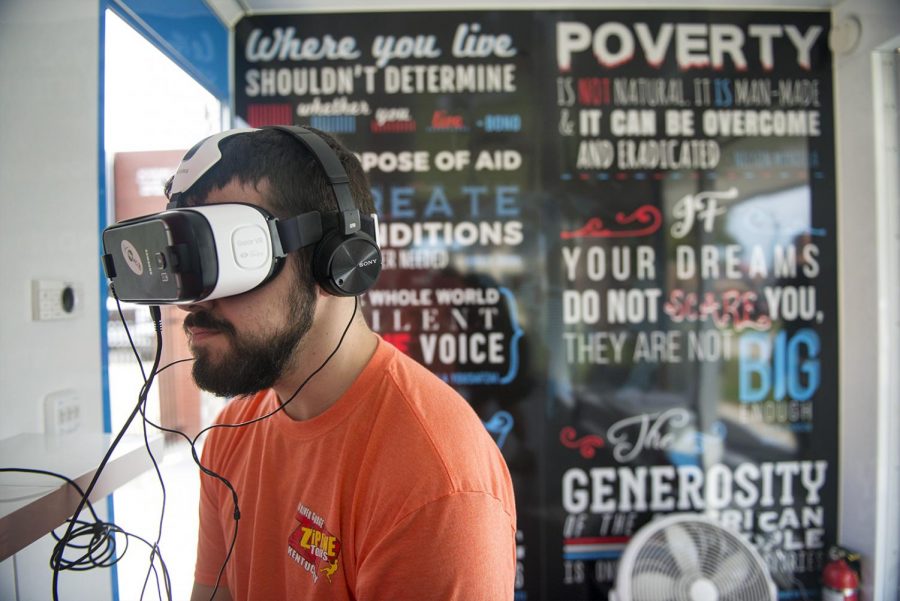 Senior Parker Smith watches a virtual reality video on Monday, Oct. 10 at South Lawn. The video shows what a day in of a woman living in extreme poverty experiences. Members of the group one.org are collecting signatures and engaging with voters to petition the presidential candidates to help people in extreme poverty.

At the ONE VOTE ’16 Caravan, students were able to register to vote, view virtual reality films about women living in extreme poverty and jump in an adult-sized bounce house.

The caravan is part of a campaign put on by ONE, a nonprofit organization focused on “taking action to end extreme poverty and preventable diseases, particularly in Africa,” according to a press release from ONE.

The ONE Vote ’16 campaign hopes to “engage students on issues of extreme poverty ahead of November’s election,” according to the press release.

To enter the White House shaped bounce house, the ONE campaign asked students to fill out “ballots” outlining issues that were important to them. These ballots will be shared with the Trump and Clinton presidential campaigns.

Maggie Bridges, the ONE Vote ‘16 campaign representative, said she felt the White House shaped bounce house attracted many students to the election caravan, but also represented how citizens can get involved with issues important to them.

“We want the next president to have a plan when he or she enters the White House,” Bridges said. “Therefore, we’re giving you the opportunity to fill out a postcard or ballot, as we’re calling it and prioritize the issues that are important to you. Then you’re able to enter the White House after you cast your ballot.”

The election caravan was hosted in partnership with WKU’s chapter for Americans for Informed Democracy, or WKUAID, the Honors College and the Office of Scholar Development.

Charlie Harris, a ONE representative and WKU graduate, said the campaign is asking constituents to get involved, and “write to candidates to end extreme poverty.” Harris said many students had stopped by to learn more and fill out ballots about issues important to them.

Louisville freshman Chase Schnell said he was walking through the South Lawn area and decided to stop. While visiting the election caravan, Schnell registered to vote.

“There’s a pretty low voting percentage, so I think it’s important for everyone to vote,” Schnell said.

Bridges said the campaign began by focusing on the presidential election, but also focuses on states that have open House of Representative and Senate seats.

“We want all the elected officials to have a plan to fight extreme poverty when they enter office, whether that be the president, whomever he or she is, or whether it be the new House representative or senator,” Bridges said.

Bridges said the ONE Vote campaign has recently been focusing on college campuses because of the “automatic foot traffic.”

“On all college campuses, it seems like from what I’ve been able to tell here, students are really receptive to what we’re doing,” Bridges said.

Bridges said she felt like college students were interested in getting involved with “things that matter,” even if they have never experienced those things, like extreme poverty, specifically. Bridges said the virtual reality trailer helped people see what it’s like to experience those things daily.

The ONE Vote ’16 campaign focuses in on extreme poverty and making that issue a priority with elected officials.

“No matter who is elected, they should realize that these issues are important and prioritize them,” Bridges said.