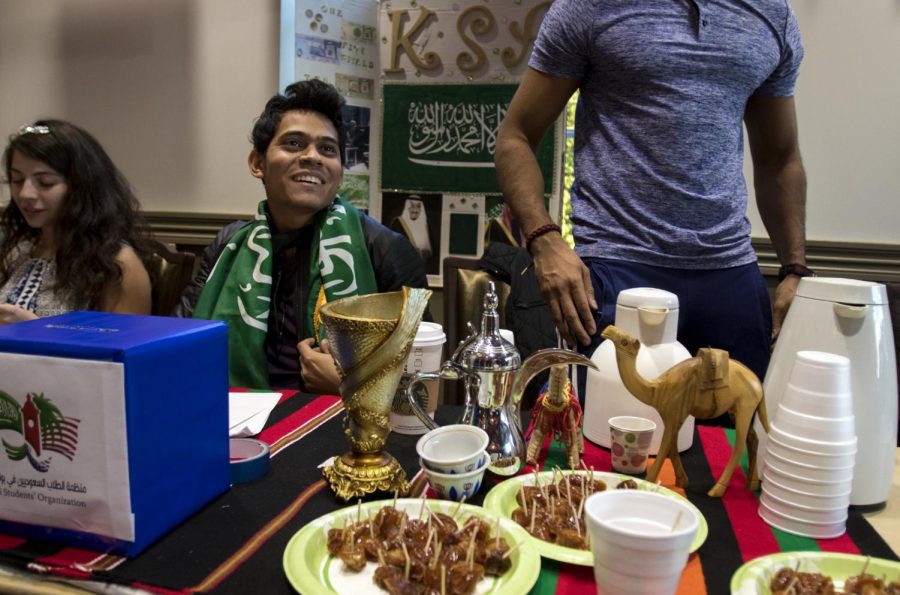 Fahad Alyami, a senior from Najran, Saudi Arabia and members of the Saudi Students Organization at Western Kentucky University, gives out samples of 'qahwah' an Arabic coffee, and candied fruits during the Home Away From Home Fundraiser on Friday, Sept. 30, 2016, at the International Center. The event raised money for refugees coming into Bowling Green in the next year.

Over the course of five years, major warfare in Syria has produced millions of refugees and displaced peoples, all seeking safety and relief from their own ravaged land.

As Syrian refugees may be resettling in Bowling Green beginning this month, a new campus chapter has been established at WKU, an organization part of a country-wide student initiative to help youth affected by crisis who are at risk of falling through the cracks.

WKU’s No Lost Generation chapter, started by Louisville junior Maggie Sullivan, is the first in Kentucky, making WKU the 48th American college campus to start the grassroots organization. It is a program implemented by Virtual Student Foreign Service interns through the U.S. Department of State.

“So I saw [the refugee-related initiative] and thought it would be a great way to kind of bring activism and awareness to WKU’s campus,” Sullivan said. “I think Kentucky is welcoming and also in need of a little bit more education on the refugee population in general.”

After being accepted as a school year-long intern to bring NLG to campus, Sullivan enlisted two co-faculty advisers and spread information of the chapter to faculty of varying academic departments.

Sullivan said the core goal of the group was to help young refugees with the use of awareness, education, fundraising and volunteerism. Committees and director positions were then created to make sure these needs were fulfilled.

“No Lost Generation specifically deals with young people and the generation that’s being displaced,” Natalie Webb, Louisville junior and volunteer director, said. “They can’t get an education, regardless the violence. If they aren’t killed they can hardly get the resources they need. Because I’m young, I understand that’s something I take for granted all the time. So I’m passionate about it because I identify with the kids.”

Webb underwent an experience last year that permanently made the refugee crisis very real to her. During her study abroad trip at Harlaxton College, a visit to France caught her in the Paris terrorist attacks in November of last year.

“ … it was a horrifying experience and I never want anyone to have to go through that, especially children,” Webb said. “They don’t deserve it.”

“But, I had that fear set in and then I realized that some people go through that every day,” Webb said. “ … like [refugees] don’t know when their loved ones are going to die, they’re trying to escape, they’re getting trapped out in the middle of the ocean … and that’s all because all they want is a safe place to go.”

Thousands of refugees have been resettled in Bowling Green over the years. In recent times, the International Center of Kentucky, the local resettlement agency, has been working with peoples from countries like Somalia and Myanmar, as well as Bosnia in the past, Sullivan said.

“Standing with Syrian refugees today is the same with standing with refugees from the past and the future,” Soleiman Kiasatpour, associate professor of political science and co-faculty adviser, said. “The repercussions from [the Syrian civil] war are going to be with us for a while … there’ll be more refugees, many other countries will build more walls, and at the end of the day, some of them will be coming here.”

The chapter’s committees are in the process of determining what kinds of projects they want to be working on this year. Webb said she wants to use her past connections with the International Center of Kentucky to coordinate scheduled volunteering for members.

Sullivan would like the organization to pool in people from diverse backgrounds and academic interests, as well as bolster a welcoming and integrated international community.

For information on how to join the chapter, contact Sullivan at [email protected]