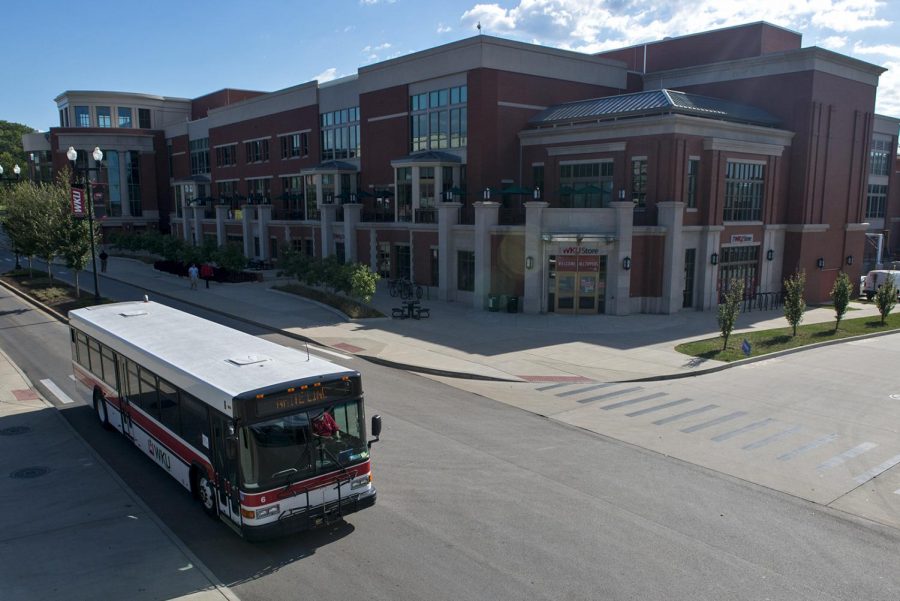 A campus bus leaves the bus stop in front of the Downing Student Union on Sept. 28, 2016. A new bus route will allow students to park in the downtown parking garage and ride the bus to campus. Matt Lunsford/HERALD

WKU students will now be able to park for free in the downtown parking garage across from the Bowling Green Hot Rods’ Stadium because of an agreement between Parking and Transportation Services and the owners of the parking garage.

The route for the Topper Transit Red Line has also been changed to provide transit service from the parking garage on 8th Avenue to WKU’s campus.

Jennifer Tougas, director of PTS, said in an email the decision to allow students to park for free in the parking garage was due to the reduction in on-campus commuter parking. Because of the construction of Parking Structure 3 in the Creason Lot, Tougas said the campus has lost 150 commuter parking spaces.

Tougas said PTS also decided to allow students to use the parking garage because of several large events happening on campus later this semester. The parking garage will add alternative parking for those events. She said the Topper Transit Red Line route also had extra time that would allow for the expansion of the bus route without costing extra money.

In a campus-wide email, PTS included a list of changes to the Red Line route. These changes include the addition of four bus stops and the removal of one bus stop.

“Providing free parking for WKU students and providing transit service for students to get to and from downtown supports that effort,” Tougas said.

After the end of this semester, Tougas said PTS will examine the system to determine if it is a good idea to continue to allow students to use the garage for free in the spring semester.