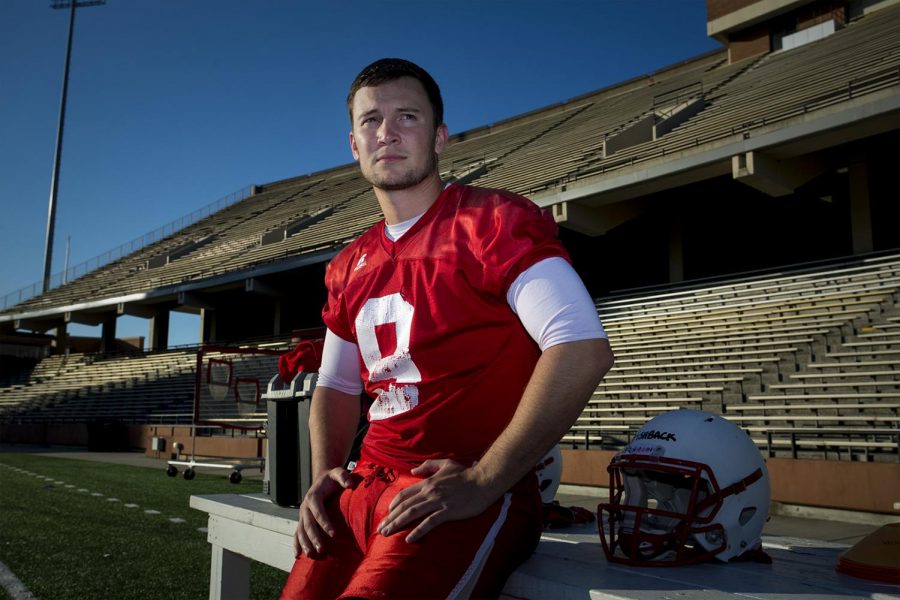 Redshirt senior quarterback Nelson Fishback (9) sits for a portrait after the football team practices on Tuesday, April 12 at Smith Stadium. Fishback was expected to be the starting quarterback until he tore a muscle during a practice.

He patiently waited his turn at stardom for three straight seasons and the 2016 season was finally the time for redshirt senior quarterback Nelson Fishback to take over under center for the Hilltoppers.

However, fate would play a much different hand for Fishback.

After back to back record breaking seasons, the WKU football team was looking to replace one of the most iconic athletes in school history.

Brandon Doughty threw for nearly 10,000 yards and 97 touchdowns in his final two seasons on the hill and also led the Toppers to a 2015 Conference USA championship and back to back bowl victories in that span.

However, Fishback suffered an injury to his right pectoral tendon before the season started that ended his 2016-17 season and his college career.

“It was heartbreaking to see a guy who’s entering his fourth year here and competing for a starting job to go down like that,” redshirt sophomore punter and roommate Jake Collins said about Fishback’s injury. “It was heartbreaking because everyone saw him work day in and day out. He’s always been a team guy with a positive attitude.”

Fishback came to WKU in 2013 after playing one year at Butte College. During his one season in a Roadrunner uniform, Fishback threw for nearly 1,500 yards and 13 touchdowns while running for five more touchdowns in a run-heavy offense.

He also led the team to a Nor-Cal Conference Championship and a 31-17 win over Fresno City College in the State Center Bowl.

During his three-year stint as a backup quarterback at WKU, Fishback went 20-26 for 244 yards and one touchdown, along with a rushing touchdown in minimal playing time.

Despite being forced to sit out his final season, the Durham, California, native has found a way to make an impact at the quarterback position.

After the injury, Fishback got a head start in his coaching career by taking a position as a quarterbacks assistant under quarterbacks coach Brian Brohm.

“The injury really bugged and hurt me for one or two days,” Fishback said. “But I had to realize that everything happens for a reason. I asked myself ‘What am I going to do? Do I want to feel down on myself or do I want to make something positive out of the situation?”

Fishback said his next goal in his career is coaching because he “wanted to a have an impact in some way.”

“I wanted to bring something to this team that I’ve worked so hard and built camaraderie with,” Fishback said. “I told coach [Brian] Brohm that I was interested in coaching. It was pretty sudden and hectic, but he told me he would love to have me. I told him I want to learn as much as I can.”

Despite a rocky 3-3 (1-1 C-USA) start, as of publication time, which featured heartbreaking losses against Vanderbilt and Louisiana Tech, the quarterback position has been a strength statistically with Fishback as an assistant.

Backup quarterbacks graduate senior Tyler Ferguson and redshirt sophomore Drew Eckels have combined for 243 yards and two touchdowns with no interceptions. The WKU offense also ranks ninth in the nation in total offense and second among non-power five schools.

“I wouldn’t even necessarily call myself a coach yet because, well, I was playing with these guys not too long ago,” Fishback said. “I’m really just here to help these guys out especially the quarterbacks. I just want to lend a helping hand and answer any questions.”

The quarterback position will need to continue to excel if the Toppers hope to repeat as conference champions again. As for Fishback, his teammates believe this is just the beginning of a long coaching career.

“Nelson knows the offense inside and out. Having Nelson as a coach is just like having another offensive brain on the field,” Collins said. “He definitely wants to coach. He talks about it every day after practice.”

As for now, Fishback will continue to pace the WKU sideline with leadership, determination and the hope that fate will be on his side.