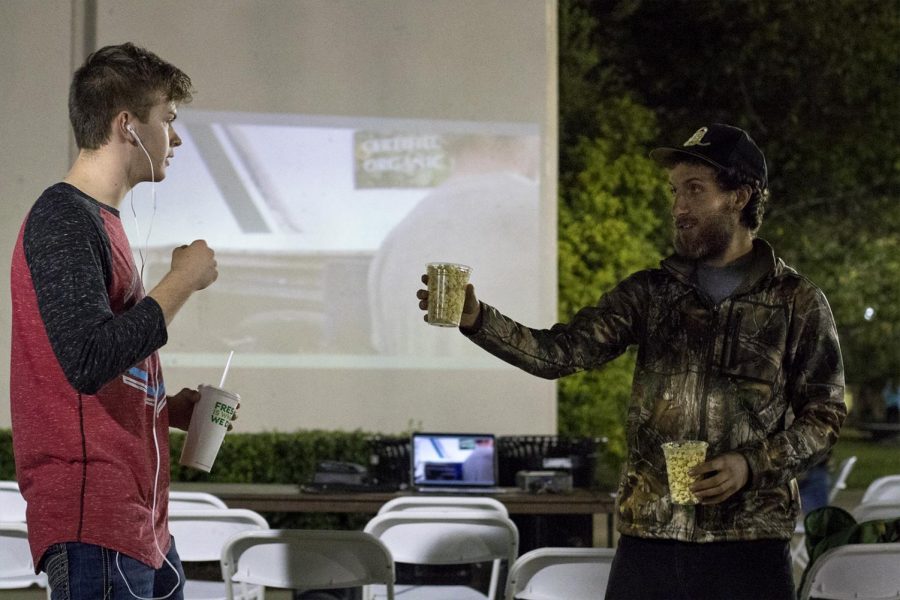 Max Goldstein, right, a freshman from Louisville, hands out popcorn during a screening of "Just Eat It," presented by the Office of Sustainability on Monday, October 24th, 2016 on south lawn. Just Eat It is a documentary that follows a couple for 6 months that only eats wasted food, or food that is unfit to be sold in a grocery store. Evan Boggs/HERALD

On Monday night, students passing by South Lawn may have been offered free popcorn and a chance to watch a movie projected on the Academic Complex. Many students accepted, not knowing the popcorn they ate may have been from the same batch they were eating at the Homecoming parade.

The movie, “Just Eat it: A Food Waste Story,” is a 2014 documentary about filmmakers Jenny Rustemeyer and Grant Baldwin, who decide to live six months eating only food discarded by other people in an effort to raise awareness of food waste. Students were encouraged to watch the documentary while eating popcorn left over from local movie theaters and the Homecoming parade.

Elizabeth Gafford, coordinator of resource conservation in facilities management, was inspired to show the film after going to Nashville, where the Tennessee Department of Environment and Conservation hosted a screening of the film.

“We thought it was inspiring and informative, so we decided to host a community screening of the film on campus for National Food Day,” she said.

According to Feeding America, a non-profit organization that brings food to underfed Americans, an estimated 25 to 40 percent of food in the United States will never be eaten. Every year, an estimated 70 billion pounds of food is wasted in the country. The food tends to end up in landfills, where they can decompose into methane, which can cause global warming faster than carbon dioxide. Feeding America recovered two billion pounds of food in 2015.

The United States Environmental Protection Agency has a Food Recovery Challenge, which encourages companies to donate excess or leftover food for a greater cause. On its website, the EPA has a food recovery hierarchy, a reverse pyramid ordering the uses of excess food from most to least.

At the top, the EPA’s goal is to reduce the amount of surplus food. Descending from that is having the food used to feed hungry people, then animals. Industrial and composting are near the bottom.

Max Goldstein, a Louisville sophomore and vice president of the Horticulture Club, said many farmers’ markets are unable to sell some of their food because of its irregular shape. Despite the food being as edible as conventional produce, farmers end up with more than they can eat, and some even use the food for compost.

“It’s not good for the soil to make compost out of tons of tomatoes,” Goldstein said, noting their acidity.

At the bottom of the EPA’s inverted pyramid is throwing food away in the landfill, which should be used as a last resort.

Some students are against the idea of throwing away edible food and are at the planning stages of founding a Food Recovery Network chapter at WKU.

Lawrenceburg senior Alexis Corbin, student ambassador for the Office of Sustainability, said her childhood is one of her inspirations for her involvement in conserving food.

“My family couldn’t afford to waste food,” she said. “Food waste is something that is sensitive to me.”

When visiting friends, Corbin would eat their food if they left it behind. She listed the many ways people recover food, including getting it from friends and dumpster diving.

“It’s a little offsetting when you see a dumpster filled with hummus,” she said.

The WKU Food Recovery Network chapter is projected to open by the end of the spring semester. Currently, they are looking for community partners and finding staff to train. Their showing of “Just Eat It” aimed to bring awareness of the project.

Lexington senior Lauren English represents the future Food Recovery Network chapter, and said she hopes to see the chapter off the ground soon.

“Food waste is a huge issue everywhere, and students can make a difference here in Bowling Green and our campus,” English said.

Any student who wants to be involved can contact anyone involved in the Food Recovery Network chapter, or contact Elizabeth Gafford.