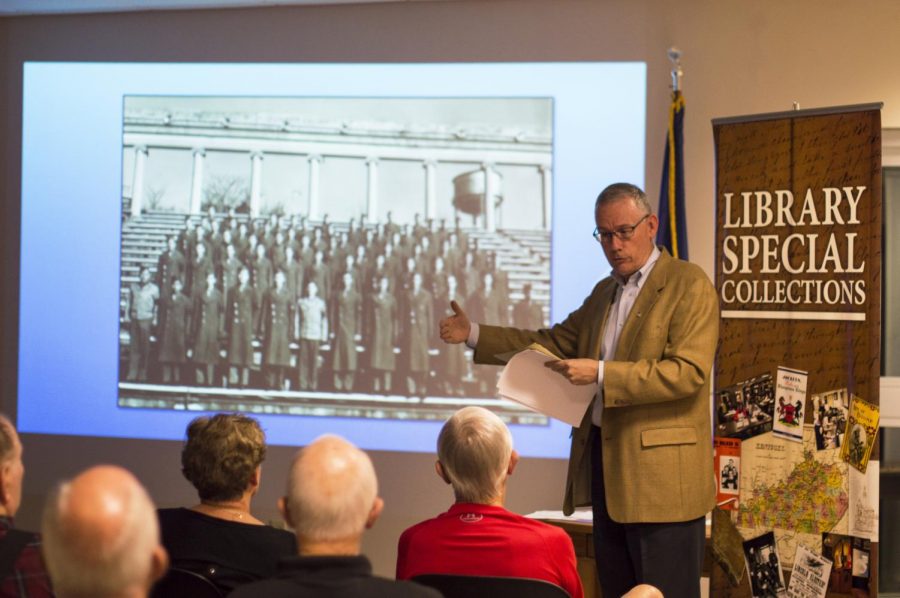 Jonathan Jeffery, head of the department of library special collections, and manuscripts/folklife archives coordinator discusses the history of the Bowling Green-Warren County Regional Airport on Tuesday, Oct. 18, at the Bowling Green airport. Jeffrey was one of three WKU faculty who spoke during the presentation. Hannah Leboeuf/HERALD

“It was absolutely exhilarating,” Curtis said. “And I’ve flown many times since.”

The Special Collections Department of WKU Libraries partnered with Landmark Association and Co-Mar Aviation to host “I’ll Fly Away: The History of the Bowling Green/Warren County Airport” on Tuesday, Oct. 18, an event discussing the early history of the local airport.

Newspaper articles and photos almost 100 years old were used from the WKU Libraries to assist in telling stories; stories of planes coming to Bowling Green to fly over and observe the oil fields in the early 1920’s. Another was a story of a WKU student in 1918 falling through a sky light in the ceiling of Van Meter when running across the roof to watch airplanes soar over the town.

To take a ride in a three-passenger airplane at the time was $10, which is the equivalent to $120 today.

The Bowling Green airport was once highly reputable and known as “the best aviation service in the south,” according to one of the articles from the collection.

Stories of economic depression, social perseverance and the act of lobbying for the airport to remain; all were essential pieces of the puzzle put together that is now called history.

After the closing of the presentation, the crowd that had gathered to hear the rich history of their town got up from their seats and the room was filled with people reuniting and catching up with one another.

Gaps were closed, friends were embraced and chatter quickly filled the room.

Among this group of people was Dan Cherry. Flying in his first airplane at the age of 5, serving 29 years in the air force as a pilot and then flying his own plane for eight years after retiring from the air force, Cherry has a lot of miles and time in the sky under his belt.

“It’s a feeling of complete independence and escape from everything on the ground,” Cherry said about flying. “Even flying in the simplest of airplanes requires the extreme amounts of concentration. When you come down from that, subconsciously you have put aside all of your worries and your greatest concentration is flying that airplane.”

One of the best things about this, Cherry added, is that you come down from a flight completely refreshed from the world and all of the problems in it.

If you’re a good pilot, you go up, trying to fly the perfect flight and accomplish the perfect mission, Cherry said.

Cherry reflected, adding that it’s a continuous learning process, a process in which you can never stop being refined, which he says has also cultivated humility and diligence.

“If I had anything to say to anyone interested in flying it would be that if you’re going to fly at all, you need to fly a lot.”

Jake Curtis says that flying is closely related to the way in which we approach life. “It’s exciting and terrifying and you have to be determined and not give up,” Curtis said.