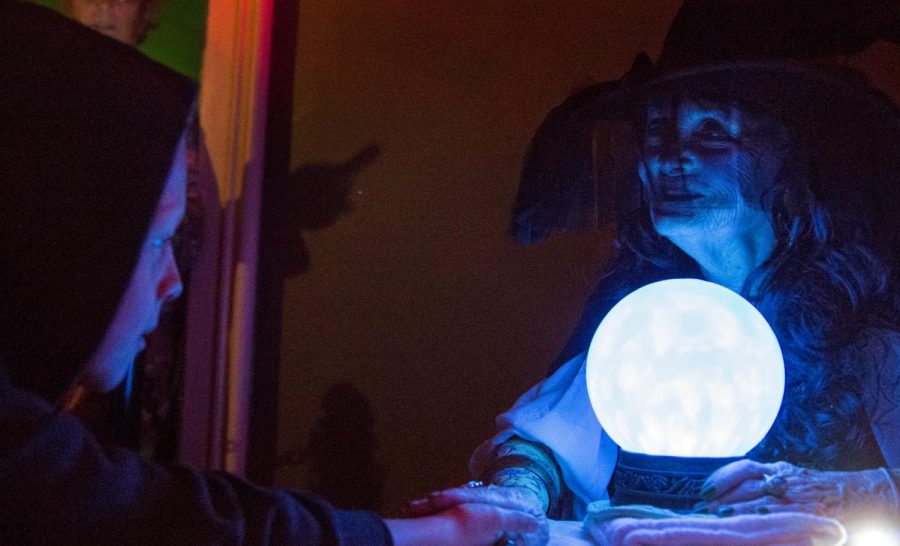 Riverview at Hobson Grove is a house near the Barren River. Built in the late 1850s, the house on the hill became a historic landmark, with tours available in 1972. The home gives a glimpse into life during the Victorian Era. The nonprofit tours raise money to help preserve the historic landmark.

Riverview has previously had Christmas-themed tours, but this is their first time with a Halloween theme, where they discuss how Victorians celebrated Halloween. For seven dollars for adults and two and a half for children, was the tour worth it?

As a newcomer to Riverview, I say yes!

The tour began with walking through a pavement lined with jack-o’-lanterns and paper decorations. For the most part, actors dressed in Victorian garb, though a few ghouls roamed around as well, giving a witch-like spell.

The tour guide told a story of how Victorians turned Halloween into one big house party. The guide also shared a story of Stingy Jack, a trickster who trapped Satan. The story is one of the many to explain the origins of the jack-o’-lantern.

Once the tour guide finished the introduction, the guide let us in the house. Here, the house took me to the 19th century. The house was beautifully decorated to look like a Halloween attraction from the lighting to the props.

Once inside, the tour became nonlinear. Visitors could stay as long as the house was open, with each room containing a different theme or some interesting bits of Victorian Halloween trivia.

Actors read Victorian poetry such as “Little Orphant Annie” and told ghost stories of witch water containing a demon that could turn your hair white.

A dining room with a table covered in fake spiders, mice and food displayed a cake with coins, buttons and a thimble baked in; contents found in the cake were meant to predict your future. For example, the thimble predicted you would become an old maid for the rest of your life.

Photography was a theme with many of the rooms. One section featured faked ghost photography. Long before Photoshop, people would use special effects to fake photos of ghosts and use the pictures for profit. One example is 19th-century photographer William Mumler, who staged a photo of a ghost of Abraham Lincoln behind a woman.

Perhaps the most disturbing pictures were in the parents’ bedroom. At first sight, they appeared to be ordinary family portraits. Most people may likely have seen an old family portrait from the Victorian Era; what they may not know is that sometimes the people in the portrait, usually the children, were dead at the time the photo was taken.

In the Victorian Era, postmortem photography was popular. Child mortality rates were high, and because cameras were still new and expensive, funeral homes offered the families a portrait with their deceased children.

Imagine a mother and father posing with the body of their child, getting a photo of it, and hanging the picture in their room. This situation often occurred, and it’s much scarier than any ghost story. The phrase may be trite, but truth can be stranger than fiction.

Another highlight of the tour was a fortuneteller. She read my palm and told me I was shy, intelligent and cared about my friends, but I needed to loosen up a bit because my standoffish attitude turned people away –– a perfect description! Those may be vague universal traits, but for a second, I was a believer. Until my wife got a reading saying she was indecisive, had people make decisions for her, and needs to show more affections, a far less accurate description.

The third floor was a narrow, spiral staircase that lead to a balcony with quite a view. The almost-full moon past the windows completed the night, along with the feeling of unease of being on such a narrow balcony while others scrambled to get a view.

The tour ended in the basement, where there were a gift shop and a woman handing out ghosts made from napkins.

Overall, the trip was well worth the seven dollars. I learned about folklore, history and customs foreign to the 21st century. The props, actors and lighting made me feel like I was in a horror movie. It’s an excellent, cheap educational alternative to haunted houses.

I would recommend checking it out, but the tour was open only this weekend. However, Riverview also a free Christmas tour on Saturday, Dec. 10; if you’re not struggling with finals, you should attend.

If not, regular tours of the house are available if you’re looking for something different to do. The house is not too far from WKU, and you can get a good hour of entertainment for around the price of a combo meal.