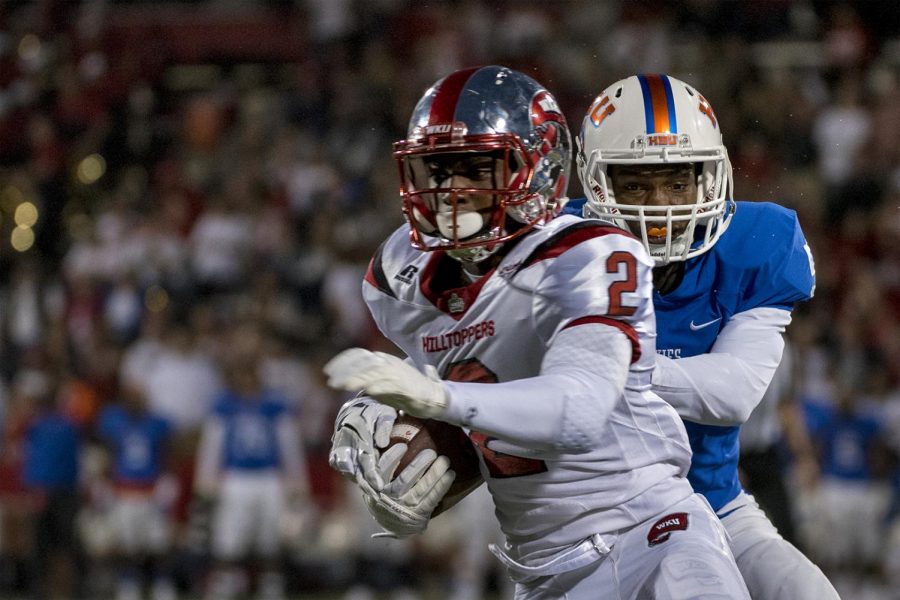 After playing a game just five days ago, the WKU football team returned to action on Thursday night as it met Conference USA foe Louisiana Tech University in Ruston, Louisiana.

However, the Hilltoppers (3-3 overall, 1-1 C-USA) suffered a setback, as they committed two turnovers and gave up 561 total yards and fell 55-52 in the hands of the Bulldogs.

Not only is it just an ordinary loss for WKU, but it’s a defeat that snaps its 13-game conference winning-streak that dated back to a November 11 beating by no other than Louisiana Tech. That affair, which took place in Ruston, was a 59-10 win for the Bulldogs.

The 55 points that the Hilltoppers’ gave up on Thursday night were the most since their 67-66 overtime win at Marshall on November 28, 2014.

For the Bulldogs, redshirt senior quarterback Ryan Higgins went 33-for-45 for 454 yards and 5 touchdowns while redshirt junior wide receiver Carlos Henderson pulled in eight catches for 232 yards and 3 scores.

In the loss, WKU redshirt junior quarterback Mike White went 36-of-50 passes for 340 yards and five scores in his fifth outing as the Tops’ starter.

WKU got the scoring started early, covering 50 yards in ten plays on its first series.  Norris caught a nine-yard pass from White on 3rd and 3 to put the Hilltoppers up 7-0 at the 11:15 mark of the first quarter.

Louisiana Tech responded with a scoring drive of its own on its first offensive possession. Higgins found Henderson open downfield and fired a 48-yard strike to bring the Bulldogs down to the WKU 25.

A couple of snaps later, Higgins hit Henderson from 22-yards out to make it a 7-7 game with 9:07 remaining in the opening period.

It would be the first time the Hilltoppers had given up a score on an opponent’s opening drive this year.

WKU would have to punt on its next drive, but the Bulldogs’ offense wouldn’t be stopped as Higgins led a quick 4-play, 42-yard drive that took 1:23 and capped it with a five-yard touchdown pass.

The Tops’ responded with a touchdown of their own to tie the game at 14-14 soon after. A couple of plays following redshirt junior kickoff returner Kylen Towner’s 87-yard return to the Bulldogs’ 14, Wales ran-in from a yard out to add seven points to WKU’s side of the scoreboard.

Higgins would record the fifth touchdown of the night on Louisiana Tech’s next drive. He found an open Bulldog 37 yards downfield to put the bulldogs back up 21-14.

WKU tied it at 21-21 with 14:15 left in the second quarter on a 7-yard TD pass from White to senior wide receiver Taywan Taylor.

Henderson would receive his third touchdown catch soon on a six-yard strike from Higgins. Louisiana Tech held a one-score advantage with 12:53 to play in the second.

The kick by sophomore Skyler Simcox was good, as it hit the left upright square but still squeezed its way in. WKU trailed 28-24 at the 6:34 mark of the period.

The Tops’ deficit was increased after the Bulldogs scored on a 10-yard touchdown run with 39 seconds left in the first half. WKU would go into halftime trailing 35-24.

Louisiana Tech carried most of the momentum for a bit, but things changed throughout the remainder of the contest.

With 8:01 left in the period, Higgins threw a two-yard pass for yet another score – one that pushed WKU’s deficit to four-scores as it trailed 49-24.

The Tops wouldn’t give up, though. Instead of doing that, White responded with a 31-yard TD strike to Norris. White  found the receiver open along the right sideline and connected with him to cut their deficit to 49-31 with 6:14 to go in the quarter.

Junior defensive back Joe Brown was ejected for targeting for a low hit on Higgins late in the third. With the ejection, Brown will miss the first half of WKU’s next game – Saturday at Middle Tennessee State University.

Just before the end of the period, redshirt junior Jonathan Barnes nailed a 44-yard field goal to bring La Tech’s lead back to 21 at 52-31.

Taylor scored his second touchdown of the game on an 8-yard grab from White – which was also the passer’s fourth on the evening. The seven points helped cut the Bulldogs’ lead to 52-38 with 14:05 remaining in the game.

Barnes would send another field goal through the uprights at the 11-minute mark. The career-long 54-yarder by the redshirt junior made it 55-38 in favor of Louisiana Tech.

White found Norris open and fired a pass from 11-yards out into the back of the endzone to change the scoreboard to 55-45. After trailing by as many as 25, WKU found itself only down ten.

On the Bulldogs’ next drive, they would burn some clock but would end up having to punt.

However, senior tight end Shaquille Johnson would block the punt as Towner got control of the ball and ran into the endzone for a touchdown. The score made it just a three-point game at 55-52 with 5:02 left to play.

Although redshirt sophomore linebacker Masai Whyte stuffed McKnight on 3rd and 1 and forced Tech to punt, Mike White would fumble on WKU’s first snap of their last drive and the Bulldogs would recover and escape with the drowned-out victory.

The Hilltoppers will look to regroup when they travel to Murfreesboro, Tennessee for a match-up with longtime rival MTSU on Saturday, October 15. Kickoff is scheduled for 1:30 p.m. CDT.