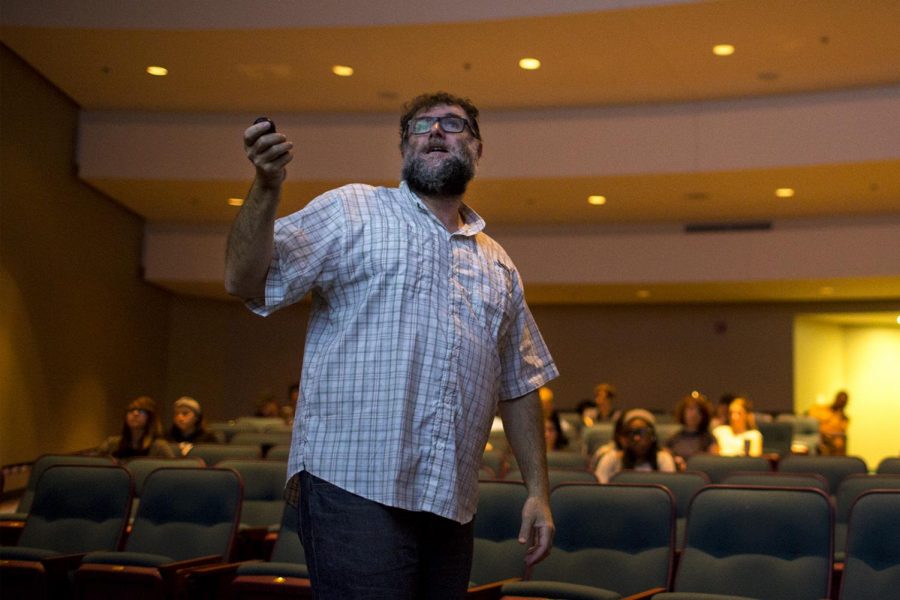 Professor Guy Jordan teaches his students in History of Art to 1300 on Tuesday, Oct. 4, in the Mass Media and Technology Hall auditorium. Jordan recently won over $100,000 on a game show called "500 Questions." He will donate his game show winnings to scholarships that will assist students with a study abroad trip to Venice, Italy, this summer. Jordan says it took a lot of time commitment to win the money he earned. "To be good at this it takes a lot of work, a lot of flash cards, a lot of studying," Jordan said.

A WKU art history professor and record-setting game show contestant is gifting around $8,000 in prize money for scholarships given to students studying abroad in Venice this summer.

Guy Jordan appeared in the season two finale of ABC’s “500 Questions” back in June, ending that run of the show winning $169,000. He answered 241 questions out of 500, the current record for the show.

Jordan is one of the professors leading a study abroad trip to Venice this summer. He said he is already funding $500 scholarships for the 14 students who are attending.

“One of the things that was important to me as a young person was having the chance to travel,” Jordan said. “I felt like having the chance to do that when I was young was transformative for me. And I know that my family and I are happy to be able to help students do that and students are really taking advantage of this.”

Jordan said the trip was originally capped at 14 students but has been extended to include 16. The additional students will also receive a scholarship in the coming months.

“My biggest worry right now is that, you know, we’re out of room and I wish we could accommodate more people,” Jordan said.

Professor Brent Dedas is the other faculty member going to Venice. Dedas said he thinks studying abroad is an important opportunity for students.

“There are not a lot of other experiences that could allow students to understand their global context in the world more so than studying abroad,” Dedas said.

Dedas is teaching a studio art class in Venice and will accompany students to the 2017 Biennale, along with Jordan. The Biennale is one of the world’s most prestigious contemporary art exhibitions. Dedas described it as the Olympics of art where artists come from their home countries to represent the contemporary art world.

Dedas said he has been to Venice before, but he has never seen the Biennale. It was one of the things that excited him about the trip when Jordan approached him about going.

“I think that the fact Guy Jordan is donating the $500 to each student that goes on the trip is one of the most admirable acts of generosity I’ve ever seen in academia,” Dedas said.

Erin Greunke, the coordinator of faculty-led study abroad trips, said most students who study abroad choose faculty-led programs due to benefits like learning from WKU professors, lower cost and experience. Some trips are offered every year, but Greunke said that even though the trips are the same, the experience is always different.

Greunke said most students apply for some kind of financial aid for their trips to help manage the cost. She said this is the first time a faculty member has donated a scholarship for studying abroad that she knows of.

Though the class limit was extended to 16 students, Jordan said he still feels a pang of remorse. The trip filled up in 24 hours and, after there was an outcry from more students who wanted to go, the extension was granted.

“I wish I could take everybody,” Jordan said. “You always do.”