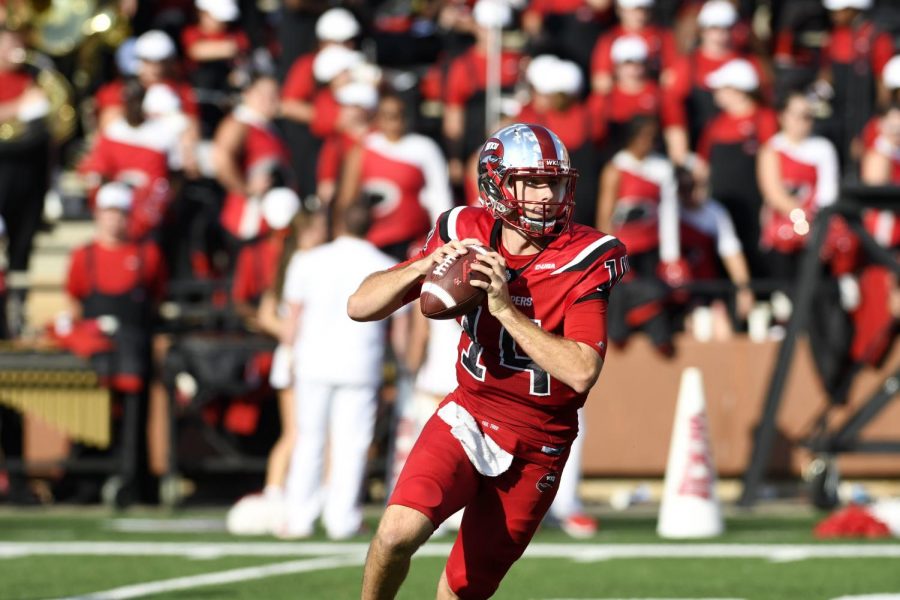 Head Coach Jeff Brohm preaches to his football team that every week is the beginning of a new season: a one-game season.

That’s all he and his players focused on last week in preparation for a rivalry showdown with Conference USA leader Middle Tennessee State University.

This week’s theme is no different with Old Dominion coming to town on Saturday as the Hilltoppers currently sit one game behind the second-place Monarchs.

“No, we take it one at a time,” Brohm said. “But I think anytime you can get some momentum it helps and being back in our stadium is always beneficial. This is a tough conference game. There’s a lot riding on it. If Old Dominion wins the football game, they’re in control. If we can find a way to win, we’re going to continue to have a chance for that championship shot.”

WKU (4-3, 2-1 C-USA) has alternated wins and losses this season, and is still looking to shore up its defensive woes after giving up 98 points in its last two games.

“We’ve got to get up and challenge things more,” Brohm said. “We have to get set and have the proper alignment … Our guys are playing on their heels; they’re not playing downhill or getting off blocks. We’re allowing ourselves to get blocked on the perimeter and getting cut all the time. If you’re going to give them perimeter throws and give them easy completions, you’re going to be in for a long day.”

The Topper defense currently ranks 103rd of 128 FBS teams in total defense, surrendering 424 yards per game and just under 30 points to its opponents.

While Old Dominion’s total offensive statistics aren’t the highest of other opponents on WKU’s schedule this season, the Monarchs are averaging 34 points and 427 total yards per contest –– two numbers that are right around what the Tops are giving up on average this season.

Brohm talked about putting a complete game together with all three facets of the team performing to their top potential, and said the defense has a lot of room for improvement.

“We’re not close enough right now,” Brohm said of the prospects of a complete game. “Offensively we did some good things. In the first half we didn’t punt, but unfortunately, they didn’t punt either. As a defense you just have to find ways to get stops. If you look at our defense this past week, we just gave up way too many perimeter throws … If we can take away those, and not give up so many deep balls over our head and make them throw real routes, we’ll be better.”

WKU’s last two games have essentially been shootouts between both offenses on the field, and graduate transfer linebacker Keith Brown said he’s not ready for another one.

“Of course not,” Brown said. “We want to lower the scoring that we allow and we just have to come out and be more aggressive on defense. We just have to come down and recognize the play faster and everybody has to come to the ball so that they don’t just cut back and turn it up field.”

Brown spends most of his time trying to stop people from turning up the field, but in last week’s victory at MTSU, he did some cutting back himself.

With just under 11 minutes remaining in the game, a pass was batted directly into Brown’s hands on the WKU 17-yard line. He returned the only turnover forced by WKU all the way to the MTSU 33-yard line.

Forcing turnovers like that haven’t been as common as they were a season ago when the Toppers finished tied for fourth in turnover margin.

The WKU defense has forced just seven turnovers all season. Brown said the 52-yard sprint that followed his interception was the longest he can remember running in a game.

“Yeah it was,” Brown laughed. “That was actually my first career interception. [Turnovers] are key. We want to get the ball back to our offense. The more opportunities we give them, the more touchdowns we’ll put on the board.”

The good news for the Topper defense in light of its recent struggles is that ODU’s defensive attack isn’t much better on paper.

The Monarchs allow 25.5 points and 383 total yards per game, which is below average considering their schedule up to this point. The combined record of ODU’s opponents is 17-21, and only one of those opponents is averaging more than 26 points per game (North Carolina State).