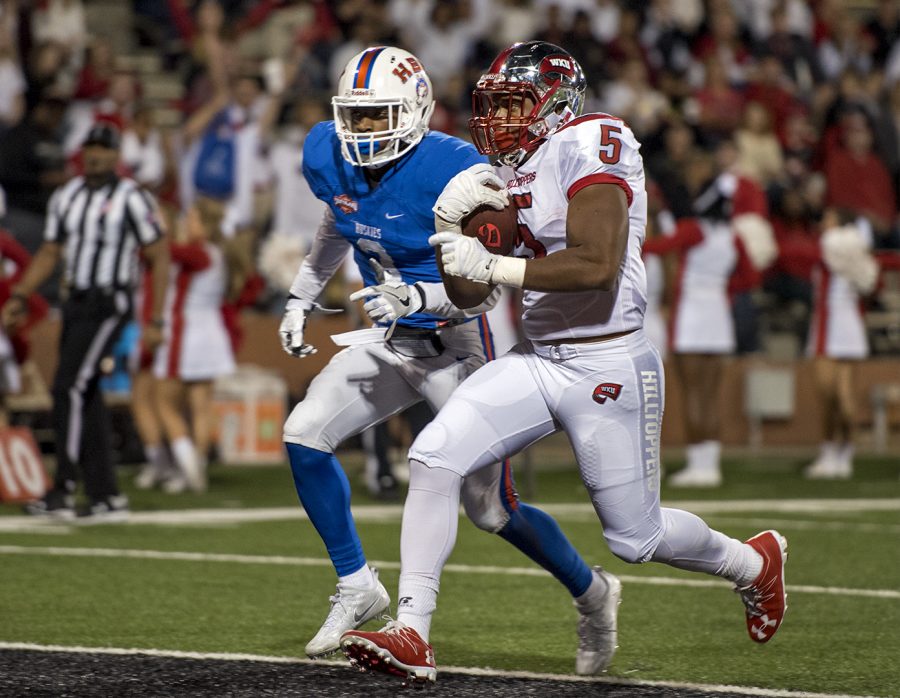 Redshirt freshman running back Marquez Trigg (5) runs in for a touchdown during the Hilltoppers' 50-3 win over Houston Baptist University Saturday, Oct. 1 at Smith Stadium. Gabriel Scarlett/HERALD

One week after a heartbreaking loss to Vanderbilt University, the WKU football team earned a bounce-back home victory in a 50-3 blowout of Houston Baptist University, an FCS school.

“I was proud of the way we took the field today and came out and did what we needed to do,” Head Coach Jeff Brohm said. “We executed early on, moved the ball, scored points and took care of the football as well.”

The Hilltoppers were the first FBS opponent for a nascent Houston Baptist program that is only in its third year of existence. Unfortunately for the Huskies, the first offensive drive for WKU was indicative of how the rest of the game would go.

The Toppers moved the ball with ease all night long, scoring a touchdown or a field goal on the first seven drives of the game.

On the second drive, senior wide receiver Taywan Taylor hauled in one of his seven catches and eclipsed 3,000 receiving yards for his career. Taylor finished with 146 yards and a touchdown.

Senior wide receiver Nicholas Norris did most of the scoring, however, grabbing 34 and 19-yard touchdowns on the second and third drives, respectively.

Sophomore kicker Skyler Simcox booted a 50-yard field goal in the second quarter to extend the scoring streak to four consecutive drives. The field goal was the longest kick made by a WKU player since 2008.

“I think it’s huge for [Simcox’s] confidence level,” Brohm said. “He’s a very accurate kicker who’s kicked in a lot of games. Today Skyler really stepped up and performed well. He has a chance to be outstanding for us.”

Perhaps the biggest bounce-back performance came from White, who followed up a lowly performance against Vanderbilt with a 225-yard outing on 11 of 13 passing with three touchdowns to go with it.

“I’ve said it over and over again and I’ll say it again: This offense is a quarterback’s dream,” White said. “Not only the system and the coaches around us but the players as well. It’s just a testament to our coaches putting us in an opportunity to succeed and our hard work paying off.”

After an 80-yard bomb from White to Taylor for a late first-half touchdown, the Toppers took a 30-3 lead into halftime and never looked back, piling up 535 yards of total offense in the process.

The blowout didn’t end there, as Norris took a hand-off from White 85 yards to the house in the third quarter, showing a bit of versatility.

“I knew we were going to be kind of limited on the touches and reps so when I saw Ace score that touchdown quick like that, I knew the next time I got the ball I’d probably have to do something with it or I probably wouldn’t touch it again,” Norris said. “It’s kind of a competition to get the ball with everybody.”

A little over a minute of game time later, junior wide receiver Nacarius Fant returned a Houston Baptist punt 50 yards for his second return touchdown of the season.

The Toppers would go on to score one more time in the second half, as redshirt freshman running back Marquez Trigg scored his first career touchdown on a 12-yard rush.

In a bit of a step-down from a week ago in terms of caliber of opponent, Brohm said his team was able to refocus and work on some of the small things he and his players emphasized throughout the week in preparation for the Huskies.

“That was a huge talking point going into this game,” White said. “Last week we turned the ball over too much as an offense. In this game we took care of the ball well. [Brohm] preaches coming up with the ball –– not just going down with it but coming up with it and handing it to the ref. I think our ball carriers did that well tonight.”

Fine-tuning things like ball security and getting important defensive stops will help the Toppers as the team moves into October.

“We needed a lot of fine-tuning to do from the loss we had last week so we wanted to come here and work on those things before we go into a hostile environment next week,” Norris said.

With the win, WKU moves to 3-2 on the season and will now get into the meat of its conference schedule, facing Louisiana Tech University Thursday, Oct. 6, in Ruston, Louisiana, and then traveling to Middle Tennessee State University before returning home to play Old Dominion University for the annual homecoming game.

Kickoff for Thursday’s game is set for 7 p.m.