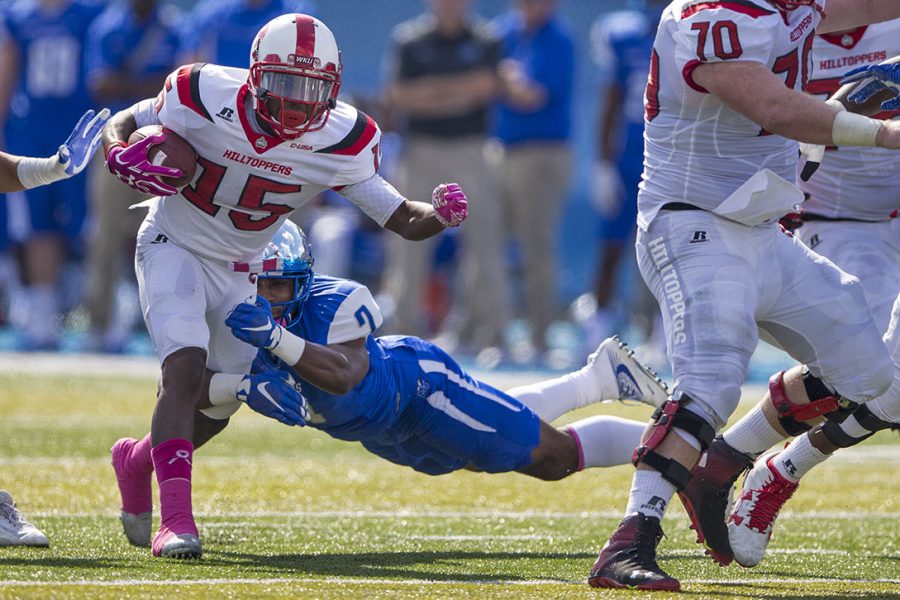 Senior wide receiver Nicholas Norris (15) runs through the defense before being tackled by MTSU's sophomore safety Jovante Moffatt (7) during the fist half of the WKU-MTSU game on Saturday, Oct. 15, 2016 at Johnny "Red" Floyd Stadium in Murfeesboro, Tn. Kathryn Ziesig/HERALD

With their conference title hopes hinging on the outcome of a road trip to Murfreesboro, Tennessee, the Hilltoppers notched a critical 44-43 victory over Middle Tennessee State University in double overtime Saturday afternoon.

The last two meetings between the two teams in Murfreesboro had gone to overtime, and WKU Head Coach Jeff Brohm was not surprised when Saturday’s contest remained tied with no time remaining in regulation.

“I think we knew that if we wanted a chance to stay in the championship hunt, we had to win this game,” Head Coach Jeff Brohm said. “We knew it was going to be tough. You can throw out all the records when we play [MTSU] because it’s gonna go down to the wire.”

For a game that went back-and-forth through all four quarters with momentum shifting in big waves at a time, it was almost a given that whoever had the ball last had the best shot at victory.

The Hilltoppers’ final drive in regulation started on their own 22-yard line with 1:31 left on the clock. With no timeouts remaining, redshirt junior quarterback Mike White found senior wide receiver Nicholas Norris close to the sideline where he converted a fourth-and-three on the WKU 35-yard line.

One 23-yard Norris reception later, White got it to senior wide receiver Taywan Taylor who took the ball to the MTSU seven-yard line.

On second-and-goal, White scrambled for what appeared to be the winning score, but it was ruled that he was down at the half-yard line.

His pass on third down fell incomplete, and sophomore kicker Skyler Simcox sent an 18-yard field goal through the uprights, sending the game to overtime tied at a score of 30.

“I thought I got in, but after that I settled in and we scored,” White said. “We know we’re the best team on the field every time we step out there, so if we can tie the game and go into overtime, I like our chances. We knew it was just a matter of time before we sealed the deal.”

Senior running back Anthony “Ace” Wales took the ball 25 yards for a touchdown on the first play of overtime, but MTSU redshirt senior I’Tavius Mathers answered with a three-yard score of his own on the Blue Raiders first possession.

Wales carried the load for the Hilltoppers on Saturday, rushing for 158 yards on 27 attempts along with three touchdowns.

“I knew my team needed me to have a great game for us to get this win, but I really can’t thank my offensive line enough,” Wales said. “As a running back, seeing the holes open like they were today, it doesn’t get any better.”

But MTSU’s extra point was blocked by redshirt junior tight end Deon Yelder, making the score 43-37 and leaving the door open for WKU to capitalize.

Wales punched the ball in from the one-yard line on the next possession and Simcox’s extra point sealed the victory for the Hilltoppers (4-3, 2-1 C-USA).

“It’s an awesome feeling. It’s like the ultimate dream for a kicker,” Simcox said. “I was pretty calm… it was an extra point and it was something that you’re expected to make.”

In a back-and-forth battle for the majority of the game, a wild series of events in the fourth quarter changed the rhythm of the game.

With just under 11 minutes remaining in the game, Stockstill’s pass was batted and intercepted by linebacker Keith Brown on the WKU 17-yard line. Brown returned it all the way to the MTSU 33-yard line, putting the Hilltopper offense in position to score.

Two plays later, White was flushed out of the pocket on second down and had the ball knocked out of his hands. Freshman running back Quinton Baker recovered the loose ball on the WKU 47-yard line.

On third-and-40, Taylor got the ball to the MTSU 32 only to see Simcox miss a 49-yard field goal. MTSU took four minutes and 11 seconds off the clock on the ensuing drive, and kicked a field goal to go up 30-27.

On the Hilltoppers’ next drive, White’s pass intended for senior wide receiver Taywan Taylor in single coverage on the right sideline was intercepted.

MTSU took over on its own 15-yard line, but had to punt after failing to convert a third and one with just under two minutes remaining. White then led the game-tying drive and forced overtime.

WKU moved the ball quickly from the start, making it all the way down to the MTSU two-yard line.

On second and goal, White and Wales fumbled the hand-off exchange, backing the Hilltoppers up to the 10-yard line.

Brohm dialed up a fake field goal, and the Blue Raiders were all over it.

MTSU capitalized on the turnover as Stockstill led a 54-yard drive ending in a field goal.

After Simcox matched that with a 41-yard field goal of his own on the next drive, the two teams traded touchdowns on each of their next two drives.

In the second quarter, Wales and Mathers toted the ball across the goal line from inside each team’s two-yard line.

Mathers, who has scored 10 of the Blue Raiders last 16 touchdowns, had his way with the Hilltopper defense to the tune of 143 yards and two touchdowns.

It was the quarterbacks’ turn next, as White found Taylor on a 45-yard strike through double coverage in the end zone. Taylor finished with 12 catches for 197 yards.

Stockstill answered, floating a 28-yard touchdown to his top receiver, redshirt sophomore Richie James. James hauled in an MTSU record 16 catches for 223 yards on the day.

White and company used all 27 seconds remaining in the half to get into field goal range, and Simcox booted a 52-yard field goal to tie the score at 20 going into halftime.

With the win, the Hilltoppers move to 2-1 in conference play and moved into second place in the C-USA East.

“It was a back-and-forth contest between two very good football teams that are battle-tested,” Brohm said. “We were fortunate enough to come out on top because it was a complete effort all the way down to the blocked extra point. That’s how small the difference between winning and losing is.”